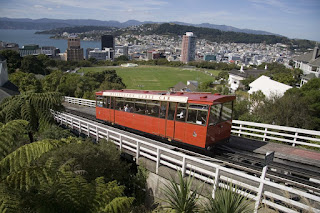 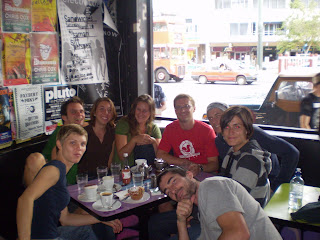 For the last two weeks and this week I am staying at the Cambridge Hotel. It's a 2 star hotel, but a 4 star backpackers, which is fantastic. They offer cheaper weekly rates for single rooms with sky TV and wardrobe. It's great as there are many others who are staying on a weekly basis, so we are developing a nice group from mostly the UK. This place has inspired me to start writing either a movie or play about the situations that happen here. It's pretty crazy.
And yes I have a job now working at the Cable Car which is one of the big tourist attractions. My mother and I had been there during her visit as a tourist thing to do. My friend Gavin is head of maintenance and he got me on as his assistant. Super flexible and enough pay to keep me going. There's a couple of good photos to come from here as well.
One more job note, I will be working on a commercial as a PA this week coming for one night. It's a good opportunity and will help me make some contacts finally!!! 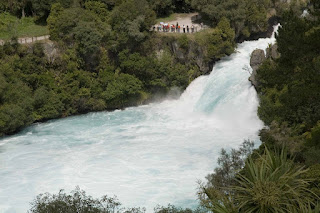 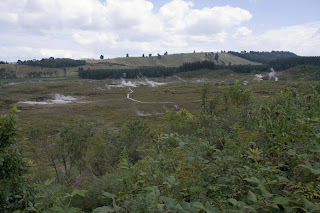 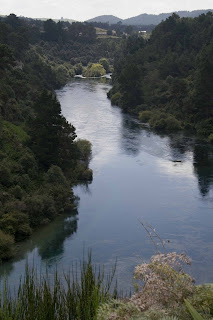 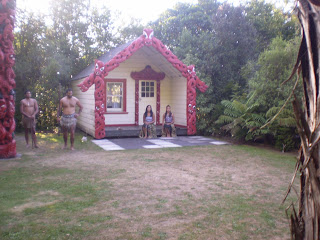 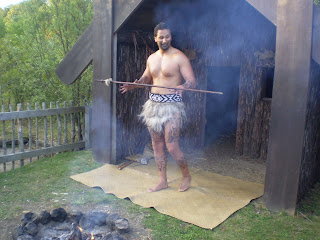 Taupo, where I had been last year, is still beautiful and peaceful. We visited the “Craters of the moon” and “”. Craters was a disappointment, but as the Lonely planet book suggested, don’t pay the $10 to go in to the park, simply stop on top a particular hill and sneek past a no entry sign to enjoy the view (as per the photo). I love saving money as a tourist!
Finally, finished Taupo with a traditional Maori Hangi and ceremony. Saw a live Haka, which was made famous by the All Blacks rugby team and was a dance performed to scare the enemy before a battle, quite good.
Mom headed back to last Thursday, March 8, 2007 and now I am on my own again. Time to start catching up on blogging and email!!!

Note: Mussels are bloody cheap here! Cooked up some mussels on the bbq one of the nights for only $1.95/kg (typically $20/kg in , I think).

Getting out of the City, Napier 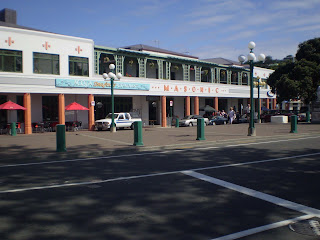 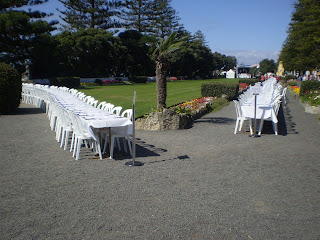 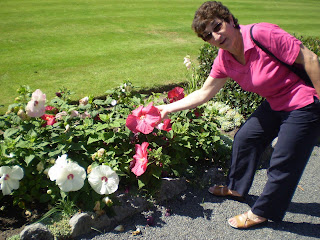 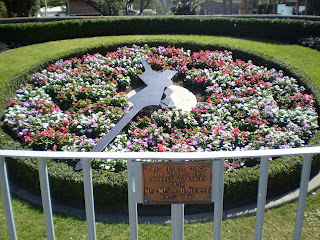 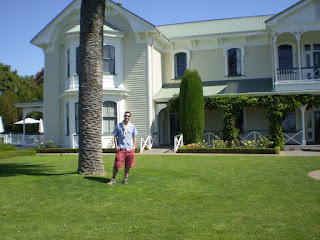 My mother and I decided to get away from the city for a couple of days before she returns to Canada, so we stayed a couple of days in Napier (Hawks Bay wine country) and Taupo (Thermal area of North Island).
Napier is in the heart of wine country that boasts strong whites and developing reds. Found out that through the white wine process a lactic bi-product is produced which I may be allergic to (I will have to test this theory). had a lot to choose from, was so, so and was the strongest of the three on our tour, which ended at a brewery, sweet. I like Moana’s as it was smaller and the most personal.
They also had "the Long lunch" when we were there that weekend, something like 800, 5 courses meals all at the same time. It's sold out a year in advance.
Napier is an Art-Deco town as you can see from the Hotel (Old Hollywood style).
No comments: 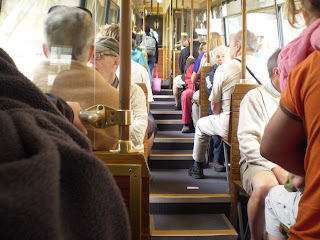 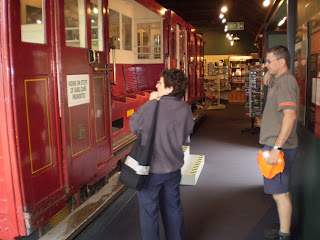 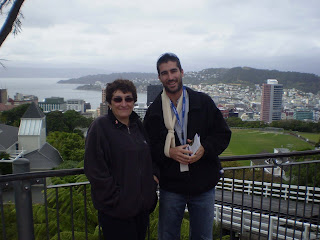 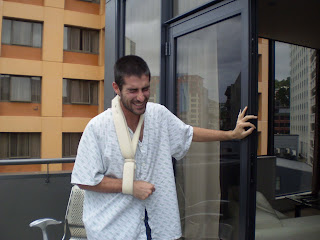 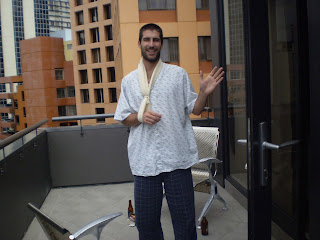 Here's a couple more photos from Wellington. My mother was trying to take a photo of me on the terrace and I started laughing about something and here's a photo of that. If anyone has ever pulled muscles in their back or stomach or broken ribs you will understand. Also a couple of photos from an afternoon when we took the only operating cable car to the university atop the city.
1 comment:

Back in the world 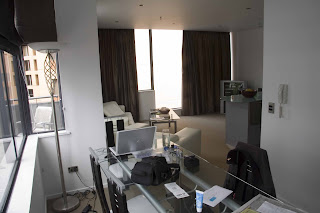 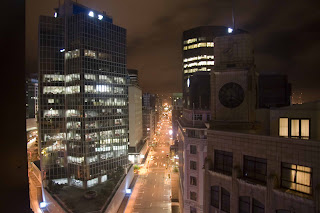 I was released from the hospital on Feb. 20 with a splint, my cut up cloths and drugs. In the ACC covers Canadian accident costs while you are in the hospital. After this your travel insurance kicks in and this is why travel insurance to and is extremely cheap ($90/year). Anyhow, my insurance was more then ready to fly me home, but the problem was and is that I am not allowed to fly for 6 weeks! So, instead they will send someone of my choice halfway around the world to assist me instead of paying for someone to assist me here. My mother is now in New Zealand and I am staying at her apartment in the CBD (Central Business District) for this week and then I think we will get away from the city to breathe the fresh air for a couple of days before she heads back to Canada, if I am up to it. So far, most of the day is good and only getting out of bed or off the couch are the major challenges. It is definitely nice to have her visit and to help out with cooking and other day to day stuff. Here’s a couple of apartment shots. It was hard to find something in the CBD that wasn't a bit expensive as this is the capital city, so most accommodation is high end. Cool views from the deck too. The apartment has definitely picked up my spirits.
No comments: 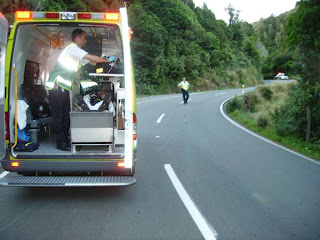 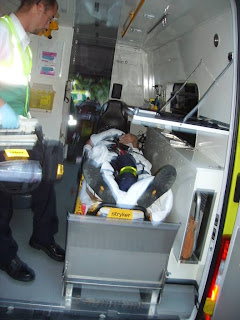 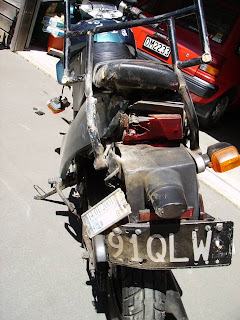 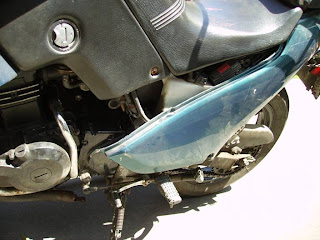 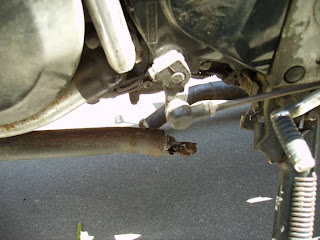 One week after owning the bike in the evening, I was riding a beautiful road, Paekakariki Hill rd, which is full of curves and blind corners; Curves = 9, Road = 8, Traffic = 5, View = 5.

I was muscling the bike along as I was still getting used to it when I went in to a left corner and drifted out to the center lane a bit, so I simply leaned into the corner which would be the correct move to bring the bike back on line. Unfortunately I put enough muscle to lean my Canadian bike (515 lbs) over, which was way too much for this little 250 (360 lbs). I leaned into it enough to bring the side stand and road together causing the bike’s rear tyre to loose the road for a split second. In essence it would be like riding through a corner with a metal rear tyre. With nothing to grip the road under my ass the bike laid down spinning 180 degrees, sliding across the road into a rock wall. I did somewhat the same without hitting the wall. It happened so fast and I only remember the feeling of breath loss as I arched my back trying to escape the feeling of a hammer being driven into my back ribs on my right side. Finally falling back to the ground on a pile of rocks where I stayed until the paramedics put me on a board and strapped on a neck collar. After a 2 hour ambulance ride I made it to the hospital and was admitted for 6 days before I saw the world again. I was stuck in my bed for 3 days straight as I was unable to even sit up. Damage report: Five broken ribs and one collar bone, bruised kidney, adrenal glad and liver with some fluid in my right lung. Some say I am lucky to be around. I think I am unlucky that I fell into a rock face. Had the fall happened in the open I probably won’t have broken a bone. It won’t happen again!
The above photos were taken by one of the first Kiwis on the scene, Paul Nuttridge who was incredibly helpful. Paul called Lynnda, came and saw me in the hospital the next and even went to the vehicle impound and paid to get my bike back. I am looking forward to paying this forward. In the Photos you can see the blind corners and some bike damage (missing exhaust, foot peg, smashed tail of bike).
2 comments: 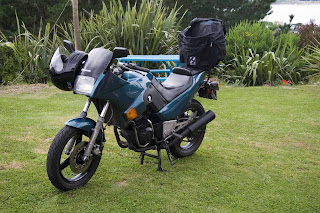 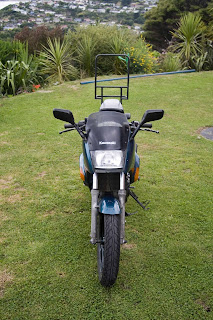 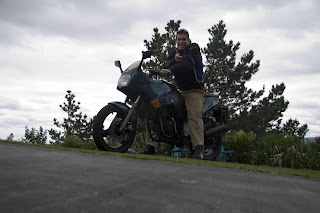 This was supposed to be posted pre Feb. 14, 2007.
So, I finally bought a bike from friends of Glen and Lynnda for only $600 nz = $550 aussie, $500 cdn, $450 us, 1 British pound. It is probably worth $1000 as it is in really good condition, but hasn’t been running for 5 years. The bike is a 1987 Kawasaki GPZ 250, which you can see from the photos is a form of a street / sport bike. In NZ and in OZ learners are required to ride two years on bikes with engines no bigger than 250 cc before they can graduate to any size. Bikes of this size tend to be readily available in these countries and not so much in where we have no beginner bike size limits. This bike was one of the top learners in 1987, and with an added travel rack and good tyres is a good buy. It has a top speed of 170 km/h and weighs only 360 lbs. Perfect for maneuvering tight corners. One problem that I noticed the day before was that I could scrap the side stand due to a soft suspension. This could cause a crash.
No comments: