Firstly, a quick shout out to the Juno Thai restaurant. Got your note and glad the Kitchen is up to date! (see Juno blog for reference)

Ok. So, before I left Canada I decided to send my baby, "Akira" to NZ and learn the importing process. MAF, Customs, Port charges, blah, blah, blah. I'm sure I will publish after it's over.

Me, my first helmet, my first jacket, my first gloves and My first bike bought in Aug 2005 (photo from Aug 05 after owning it for 24 hours). 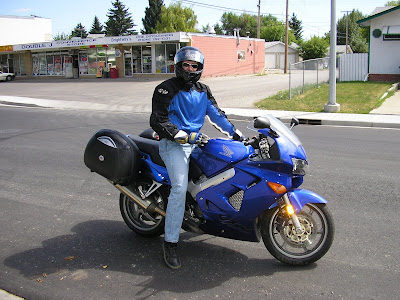 Knowing that shipping the bike would be a bit of a project, I relied on my good friend Brendan fitting the wood and kicking me in the ass to complete it. He always manages to forge through on whatever the task and the bike was no exception even though I was 50% on whether or not to send it. Brendan built a wooden case around a metal frame that my friend Mike had picked up from Trevor at G W cycle last year. I had hoped to send the bike then, but that didn't happen for one reason or another. Good thing I waited as I was able to take my last North American trip on Akira to Alaska which completed over 30,000 km in North American in 3 years. So, once Brendan got the wood ready and I got the bike ready I brought in Bill and Mark for energy and power before wing night completely slipped away. After some interesting pauses and maneuvers the bike settled in and was boxed. Finally, we ate wings and drank beer!!! 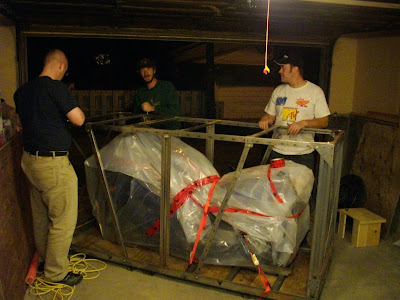 Brendan and I, and Akira with some extras (hockey gear and golf clubs) on final box up night. 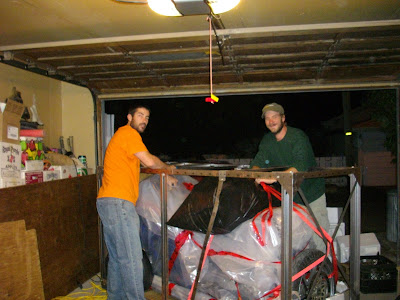 Off to NZ with dodgey truck driver. Not show in the photo, we almost dropped the entire crate off the back end of the truck when the driver left the park brake off a little too long. Hard to explain, but believe me it won't have been good. 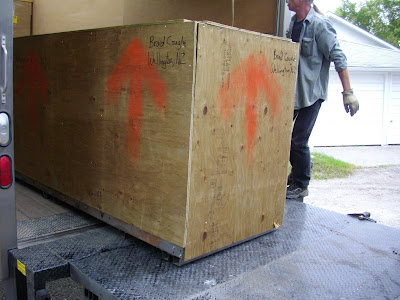 Video at the Vancouver Airport just before flying back to NZ.

Made it to NZ and I got picked up from the Wellington Airport by my welsh brother Gareth and went to his for a planned two weeks (see October). Gareth and his partner Dorit are fabulous flatmates and have a great spot up in Brooklyn with views. I hope everyone is as luckily as me to have people take them in like Dorit and Gareth.

Back on the Job. Back to work and funny enough the projects I left 3 months ago were in the exact same place. I guess that makes me feel important as nothing gets done with out me or there were a lot more important projects to worry about? I choose the first option!

Shot of "Casual Friday" me reviewing a flooring issue at a lab at the Malaghan Institute (Cancer research). Work is work with a side dish of fun. 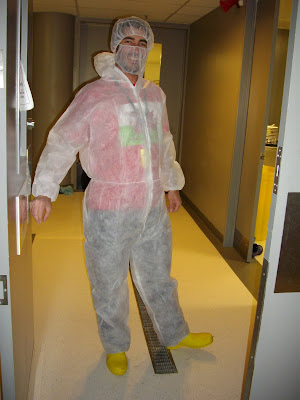 Immigration note: It sucks to immigrate! Checked my residency status to find out that I was missing a couple of things. Example: RCMP security clearance (apparently the Calgary Cop search of Canada is not as good as the RCMP search of Canada. Oh, by the way they are the same search!) and original degree, etc. Anyhow, sorting it out and should have it to them in October. Stay tuned!

Hey Brad do you have an email