Inline Hockey Season Began. Yes that’s right I play in-line hockey, which is just like ice hockey, sort of. Unfortunately there is no ice in Wellington yet. However, there is ice in Auckland, Christchurch, and Dunedin plus a couple smaller places. I have been in contact with a South African who is looking to rectify this and I will be meeting with him in Canada to discuss. Anyhow, the Tawa Typhoons began their 2009 season and we managed to go 6 – 1 in the 7 games in May. At the end of the season the top teams in our North Island South group go on to play in the National Championship which of course I will miss. Good luck Tawa!

48 hour Furious Film Making. A yearly competition where teams are asked to write, film and edit a 5 minute film in 48 hours and not a second later, seriously. I was introduced to a 48 team, the “Recpetionist”, through Philip on my hockey team, which consisted of mostly Germans and a couple other countries (even a Kiwi or two). We had a lot of experience in lighting, set dec, camera, sound and assistant directoring which gave us a good chance to put something strong in to the competition. Our genre was a M. Night Shyamalan Big Twist Movie, which I thought would make for a script challenge (which it did). The weekend went smooth enough and we completed 30 minutes ahead of time with sleep on both nights. We also managed to make it in the local paper being one of the few teams out of the 169 that were based outside of Wellington in Hutt City. http://www.stuff.co.nz/dominion-post/communities/2403360/Snap-shots-48-hours-to-make-a-film
Photo of location scouting. 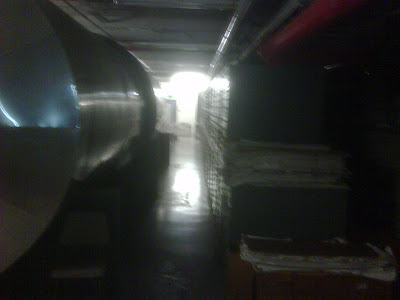 Our film was shown in Heat 13 on May 18 where we won the audience choice vote. Unfortunately no films from our heat made it to the finals on May 27, so we will need to try again next year. I attended the finals and was quite impressed with the final products. One film even had an Oscar nominated actress from the New Zealand movie “Whale Rider”.
Our entry.
http://www.48hours.co.nz/screening-room/2009/wellington/the-quarry-1/