So, I survived Stampede and moved right in to Chris's Stag party a week later. As the Best Man I was responsible for putting CK through his paces and making sure he got one last night of drinking, etc out of his system. One of the Classic Canadian Bachelor parties = Paintball, BBQ and Bar.

Not to say too much as I really shouldn't even be posting photos, but it was a good time. Now that most of us are in our thirties it was a well behaved evening except for loosing Martin. One casualty is not bad.

Bragg Creek Paintball in the afternoon. 29 deg C in those suits! I think we all lost about 3 or 4 lbs. Bill, Brad, Algernon, John, Mike, Jeff, Brad, Tom, CK, Kelvin, Me and Martin. 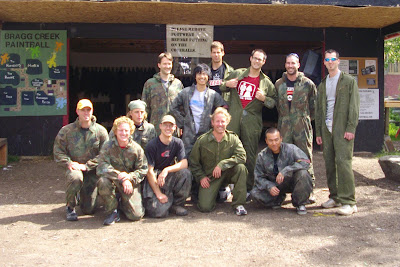 BBQ and a couple of rounds of shots/drinks.


Rounded up the boys and went to the Back Alley for some fun and yet another Bikini contest (not the norm in Canada, but fun anyhow). 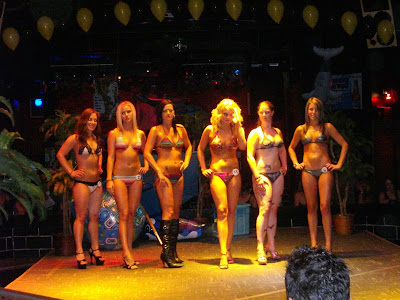 All the boys decided to go as Brad's since there were already 3 of us in the group. Thanks Alge for the name tags. 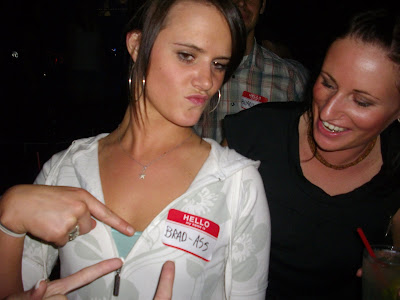 CK in his "Game Over" shirt. 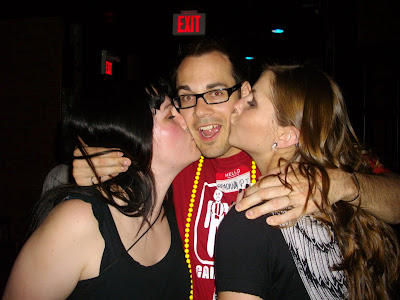 Kelvin and Brad, two of the more intoxicated of the tribe. 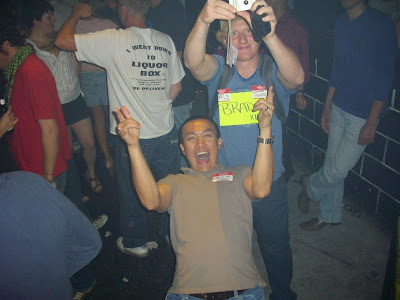 A good night. Stay Tune to see if CK goes through with it!

Another Calgary Stampede. Well, what can I say that I haven't already said in the past. It's a good time and runs over 10 days and many of people work agendas. Usually it takes everyone a day or two to get into it and this year was no different. For me, once I got in to it, I went 4 days straight. Went to the bars four days straight that is. I gave up going to the festival grounds years back unless I had Chuck Wagon or Rodeo tickets.

Got back from Europe on Sunday July 5 and rested for two nights. Then ...

Tuesday. Billy and I went to the Ranchman's on 4th for a couple at a vendor party. Not the best venue and they didn't even have country music. But, it was a good way to break in to Stampede 2009.

Some horse riding girl drinking a beer amongst the crowd in side the bar. Trust me, we don't see that every day in Calgary. 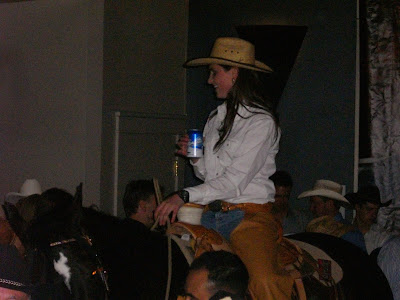 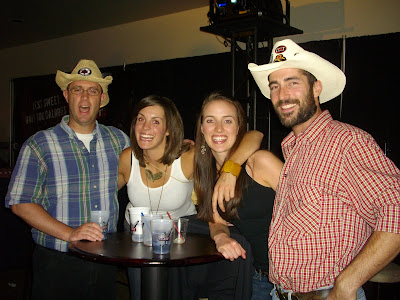 Wednesday. The Bikini contest at Wild Horse Saloon where I got to be a judge!!! Billy, Algernon, Chris and myself got in to the place after paying a $20 cover around 6pm. Had a couple of $7 beers and strutted around the huge outdoor area beneath a massive tent. 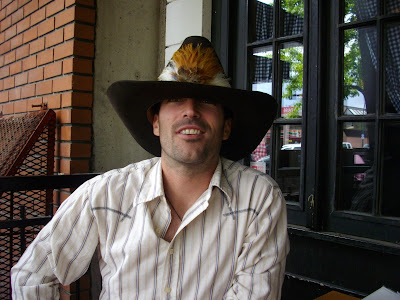 A guy it did fit. 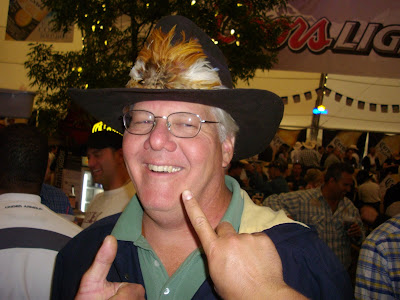 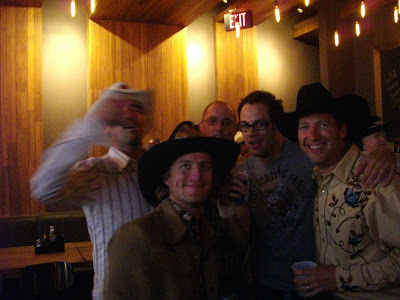 Me, Chris and one of the Beer Tub Girls. 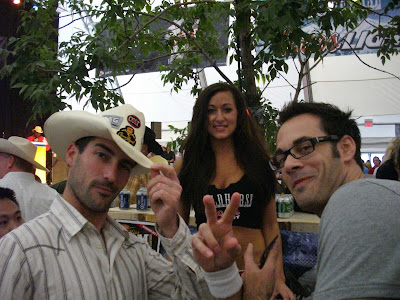 After running into some of the old cast from Heartland we took our spots near the stage for the show. Algernon, who is famous for getting into places no one can, managed to sneak his way in to judging the 2009 Hawaii Tropics Stampede Bikini Contest. Over 30 contests going for the title of miss Hawaiian Tropic and a bunch of cash and prizes. The bonus here is that he managed to sneak me in too! 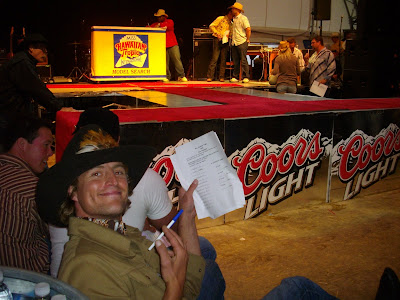 Looking for the contestant who displays confidence, poise and personality as well as overall beauty. It was a hard fought competition and surprisingly the judging was not that easy. 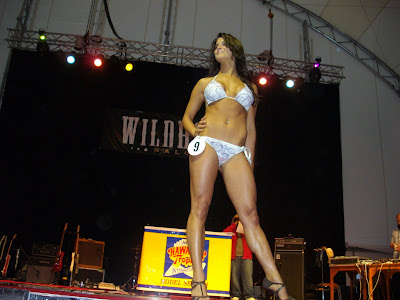 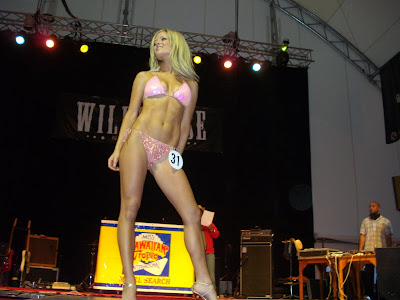 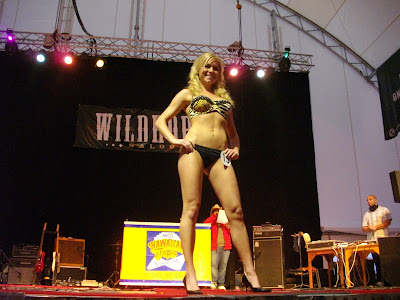 A photo after with the girl Algernon and I voted first. 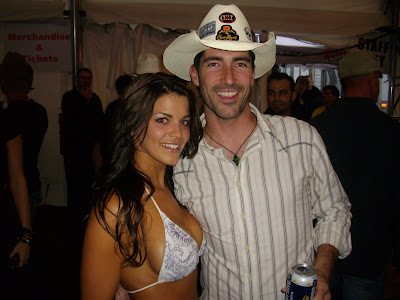 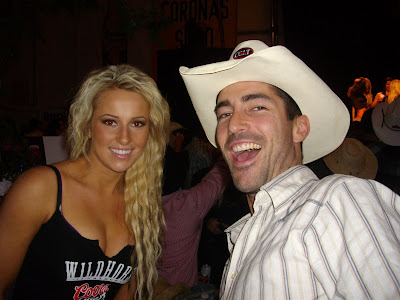 Thursday. Party Crashing. Algernon heard about a Canon Copier party with free food and drinks, which he was not invited to, but thought it was a good idea to go have a look.

I was quite nervous and hoped Alge would do all the talking, but when we got up to the greeters while Alge was looking at name tags for us, I blurted out my old company from years ago. The girl said, "Oh good, were glad you could make it, do you know Greg?". I said yes and they made us name tags. Success!

Alge a the buffet table. 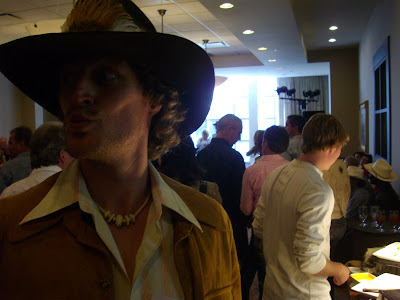 Once inside we grabbed two drinks each as we didn't know how long our cover would last. 10 minutes in one of the greeters brought over another guy who still worked for my old company and he started asking me which office I worked at. I replied, "Where am I working, I'm not working anywhere...I'm on holidays!" And we moved on. I expected the party to be 300 to 500 people, but it was only about 60 so I was still a little apprehensive. A couple more drinks, a ride on the chuck wagon and hanging with the Sunshine crew cleared my worries. I would say that we were the life of the party. 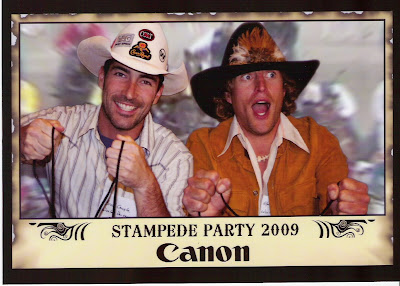 Me, Alge, and the Sunshine crew (Ralph on the right is the owner of Sunshine Ski Hill and a great guy) 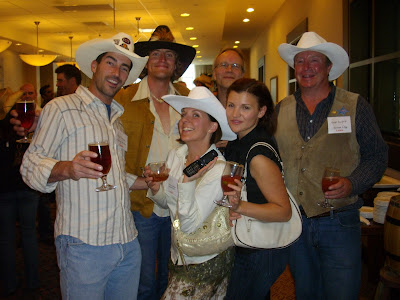 Hard afternoon of drinking. This was taken at 8pm. 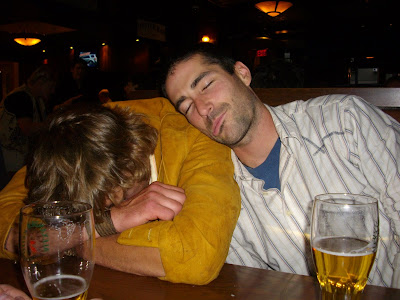 Friday. My last day of Stampede even though there was still Saturday which promised to be a good one due to everyone pent up inside waiting for the rain to stop.

Ranchmans (made even more famous in the movie Cool Runnings). 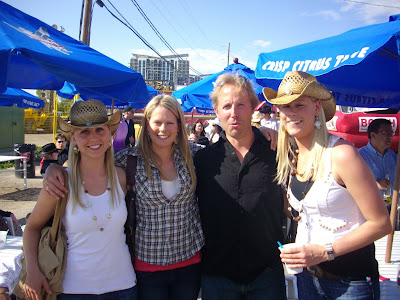 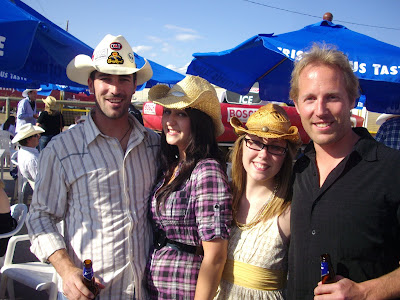 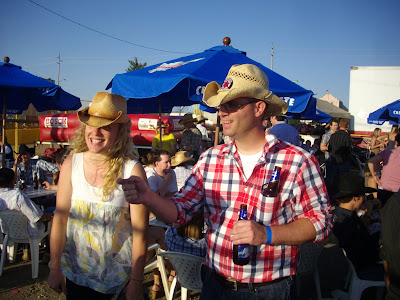 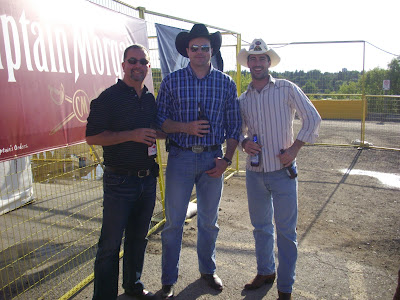 The worst bull ride I have seen in years! 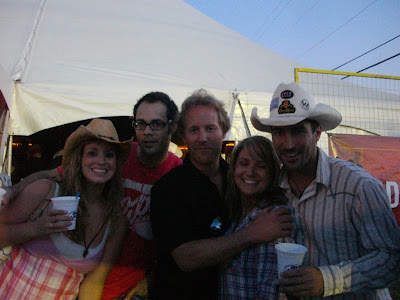