A busy November had a little bit of site seeing in Vancouver, flying back to NZ, wine drinking in Martinborough, political unrest in the Nation's Capital and my first paid film job in 2 years!

I made my way back to NZ in early November. Before getting to there I stopped in to see my old friend from university days, Davy B, who has been living in Vancouver for the past 7 years or so. Lately he has been living the dream on the weekends when he gets out of the city to his farm in the beautiful Okanagan Valley about 3 hours from Van. Good thing I stopped in on a Wednesday / Thursday in order to catch him in the city. Thanks for picking me up, showing me around and returning me safely to the airport. Good times.

Thursday night on the town. Gastown Steam Clock behind me. 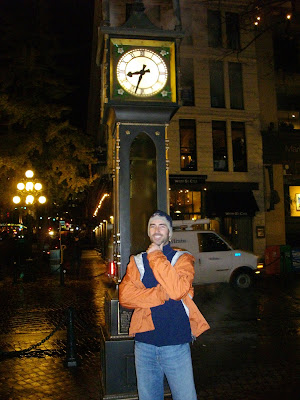 Davie B and myself at the Cambie. 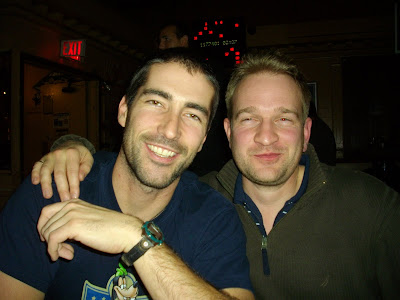 A friend Carol and Gassy Andy a busker / bum who I paid $5 to use his guitar and sing a couple of tunes on the street for the peeps. My hopes were to scratch playing for money off my list of things to do, but unfortunately Andy keep intercepting the earnings as I was busy playing. I'm going to count it anyway! Too bad I didn't think to get the video rolling either, damn. 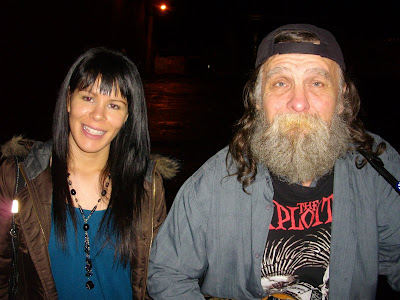 Last Canadian Sushi for a while and it was fantastic. 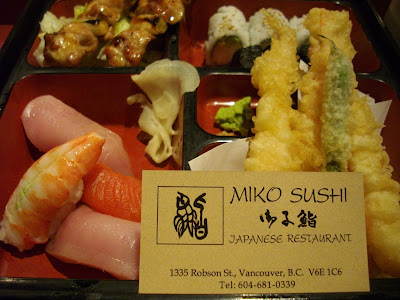 Back to NZ Friday Nov 6/Nov. 8. The flight from Vancouver to Auckland takes approximately 14 hours and you lose a day, so I left Friday night in Van and arrived in Auck Sunday morning.

Absolutely awesome view of Mt. Taranaki which stands along the west coast of the North Island about 4 hours drive from Wellington. 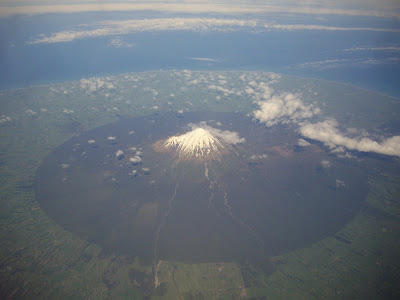 Back one week and already into the NZ culture. Toast Martinborough, which is an annual event held in mid November where the wineries / vineyards of the town and area put on a party. With wine, food, music and shuttles to and from the surrounding 10 or so spots it's a good day out especially if you get the weather. A bit windy this year, but sunny enough to make us all happy.

The beginning at Leuven in Wellington before getting on the train. 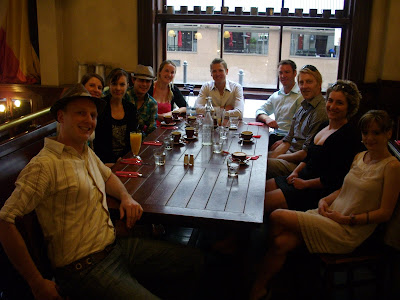 A quick look around TK wineries about 12 ish.

Sarah, Dave and I on one of the shuttles. 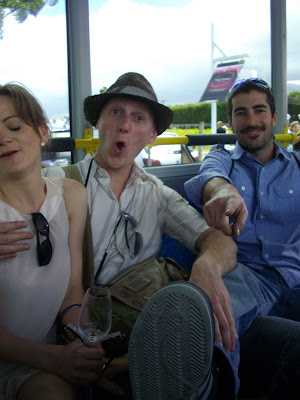 Having a good boogie at Escarpment around 3pm.

Alex and me in the back, Sarah, Dave, Laura, Emma and Shane. Great photo taken by Niels. 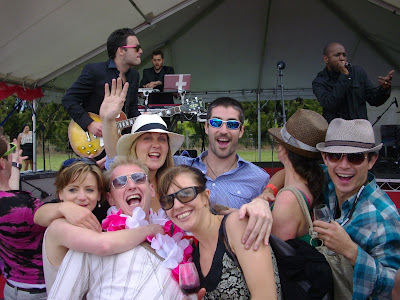 Late in the day and the cops are starting to take control or are the kiwi patrons getting out of control? "Bad boys, bad boys, whatcha gonna do?"

November 17, the Battle between the Government of NZ and the Motorcyclists of NZ begins.

With the election of the National party last year in NZ a focus on ACC levy increases has begun again (ACC is the government body that compensates and covers everyone involved in accidents). ACC have recently claimed that motorcyclist should pay higher ACC levies when registering a bike as they are costing high compensation levels. Currently my 800 cc bike costs about $300 per year and if this policy is implemented I will have to pay approximately $800 per year, Ouch!!! Silly government, don't they know that radical change doesn't happen in politics. This is also amusing as it has been stated that the ACC had a $1 MM surplus last year.

So, this spurred on a peaceful protest on Nov. 17 by bikers around NZ which consisted of bikers riding together into the city to convene on the Parliament grounds to confront the Minister of the ACC, Nick Smith.

It was an absolutely amazing experience with about 12,000 bikes turning up in comparison to the expected 4000 bikes. I have never felt so loved as a biker than on this day as we all road in to town paired over 5 to 10 km along the motorway to crowds of people waving and cheering. After arriving and hearing the biker supporter speeches I was amazed to see the ACC Minister address the crowd. And even more amazed to hear him say, "I was unaware that the levy increases would be this substantial." He must have been on vacation that day? At the end of his speech Nick Smith left to chants of "Bullshit" and disappeared back in to the "Beehive" (NZ parliament building). This is expected to be only the beginning and other motorists should be preparing their fight if ACC pushes through this policy for bikes.

One of the two main start locations for the ride into the city. 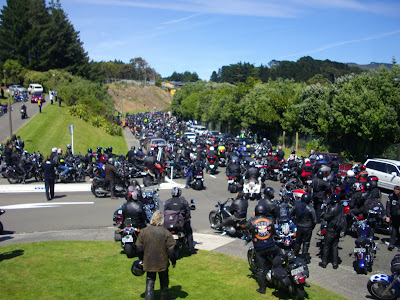 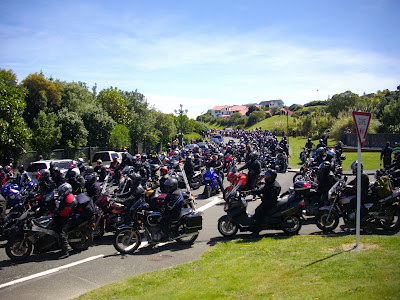 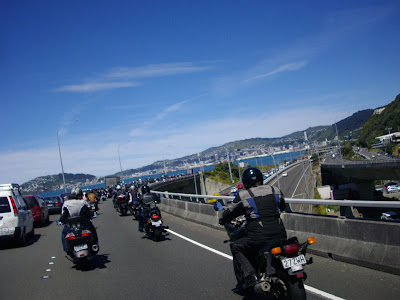 Great day to see every kind of bike. 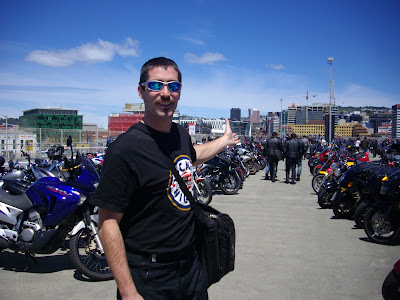 This 3 wheeler had a V8 in it and I doubt it would be legal in any other country. 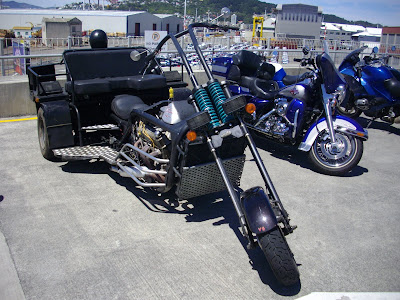 My first interview on the Life of Brad.

And finally as the month moved to a close I managed to pick up some TV work as a Production Assistant / Transport from my good buddy Carly at Kraft:haus (a group I worked for in 2007 a couple of times and my link to getting on AVATAR (due out in Dec 2009)).

Carly brought me out to give a hand with a Web ONLY show they were doing for TV NZ called Reservoir Hill. 8 episodes shot one per week and heavy interaction with the audience who actually guides the character through the show via text messages. Very cool idea which has turned out to be quite a success claiming the number one spot on the TV NZ On-demand shows. I was involved in Episode 7 and 8 and was even given an Extra role in episode 8.

Some behind the scenes photos.

This scene was written to show teens that police are now testing for drugs as well as alcohol which was part of an agreement with LTNZ who sponsored this particular episode. We even used a real cop / ex-bouncer from da clubs. 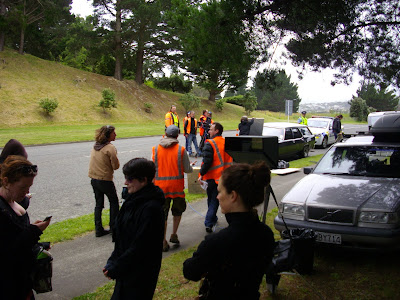 Unfortunately I can not provide footage of the show as it is only webcast in NZ. Regardless the mug shot below is me in character as part of the "Hoodies". Take my word that it was a brilliant performance, may be too good as I was asked to stop moving so much. I'm no actor. And check out the Movember action. 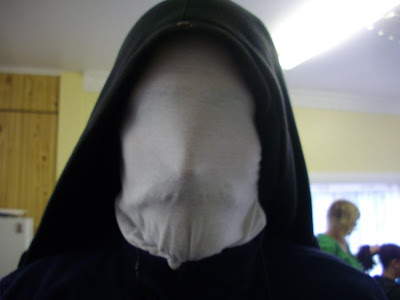 what's next for our masked adventurer?