February 2010 I enjoyed the 7s, struggled with the Tongariro Crossing and cried for the Gold during the 17 days of Olympics held in Vancouver. A pretty good month!

As I've told everyone before if you are going to visit NZ, February is the month to come here. The weather is awesome, everyone is in good spirits and the number one event of the year is held in Wellington which is the International 7s Rugby tournament (first weekend of Feb). This is a ridiculous event with masses in costume, masses singing, and masses consuming! Approximately 20,000 pay up for their 7s experience which not only occurs in the stadium, but all around town. Our team started at Taylor, Alex and Tom's place on Oriental Parade, which was a great spot to start and only a 30 to 45 minute boozy walk to the stadium.

Although you may think this event is for the young, the average age is 41 and the games go for 2 days with teams from NZ, South Africa, Wales, Niue, Fiji, Aussie, Scotland, Papua New Guinea, England, Kenya, Tonga, USA, Samoa, Canada, France and Argentina. This year Canada made the top 8 which was a great result. In the Final, Fiji beat Samoa for their first Wellington win in 10 years. Most people didn't even know who won and I'm not sure I knew either until Sunday. 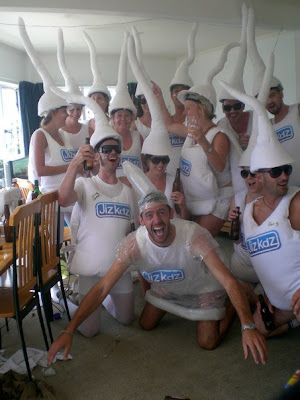 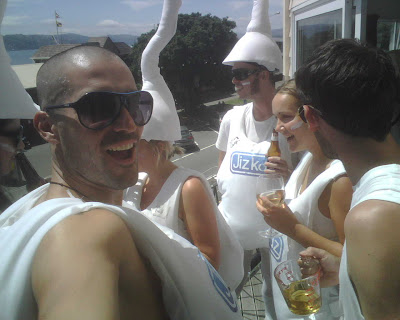 With a view of the 101 Dalmatians. 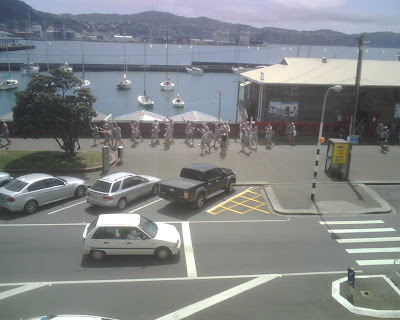 This photo was taken by one of the Dominion Post guys accompanying an article stating we got second place for the "Peter Jackson Best Execution" Award. Here Condom Scotty protects the crowd from the Sperm. 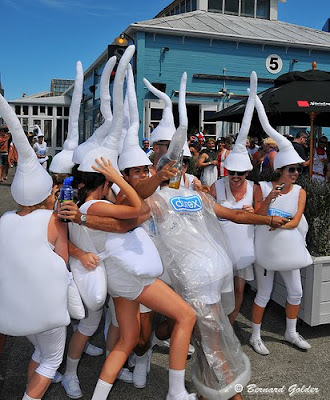 Bars on the waterfront packed out. 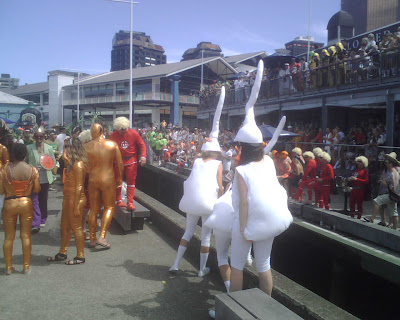 Girls losing their costumes at 1:30 pm. 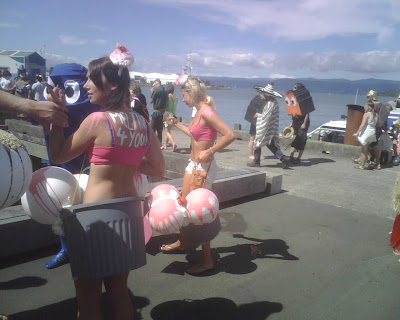 Beer lines and costume tours in the stadium. 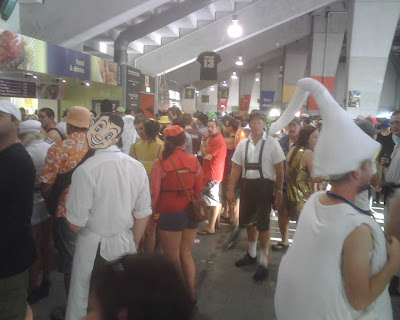 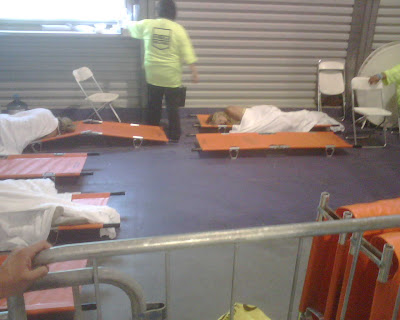 My favourite costume of this year, Traffic lights that actually changed when you pushed the button on their crotches. 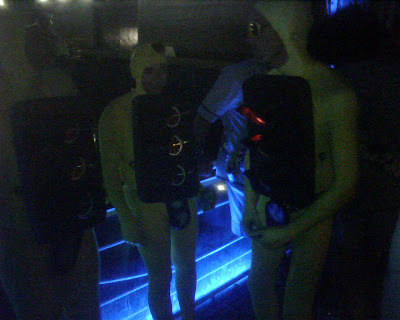 Day 2, back to the water front. 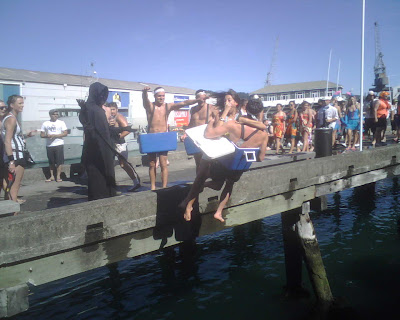 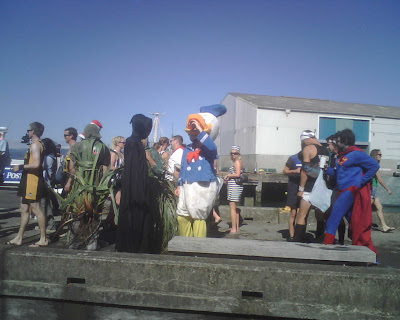 A goon who kept telling us to sit down. I sorted him out by allowing him to push me down which prompted the cops to throw him out of the stadium. Tough to get hurt wearing a sperm costume, haha. 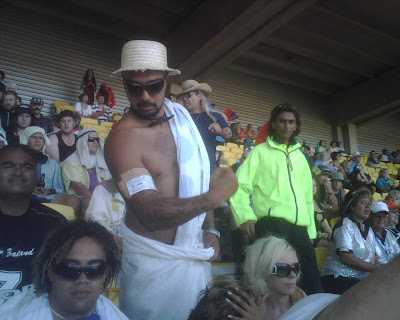 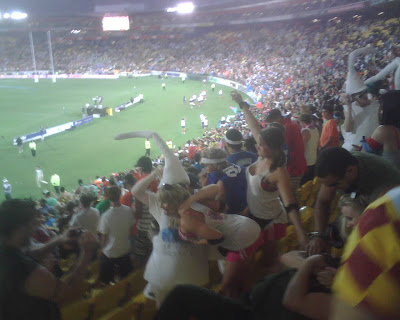 Aren't these guys supposed to be flying planes, not directing traffic? 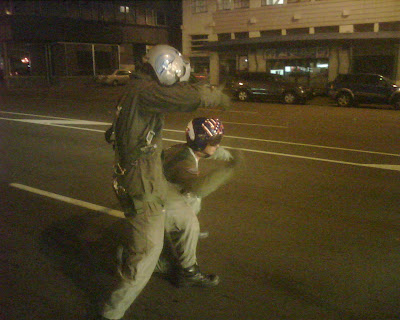 Good times and everyone survived. Most of the sperm suits did not, but a couple of them were saved and sold on Trademe, oh yeah!

In mid Feb I took on The Tongariro Crossing which is a world renowned alpine trek rated in the top 10. 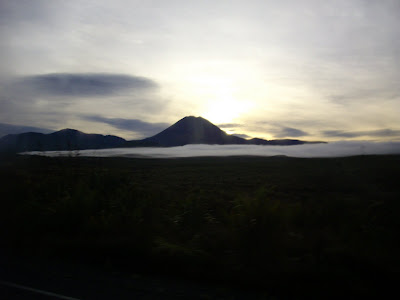 A weekend away from Welly after the carnage of the 7s weekend. Taylor suggested we take a relaxing walk over the Tongariro Crossing, yeah right! As the weather was poor on Saturday we decided to stay indoors and hang at Chateau Tongariro in Whakapapa Village saving the Crossing for Sunday instead of going to church. 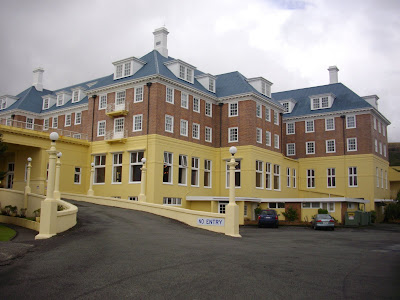 Blair, Shane, Taylor and myself battling the huge snooker table. 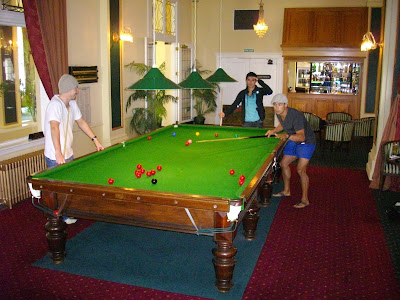 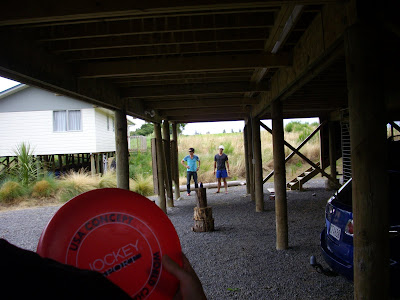 Finally, Sunday morning at 6 am Taylor and I set out to tackle the 18.5 km trek. How many km? The sign says it all. 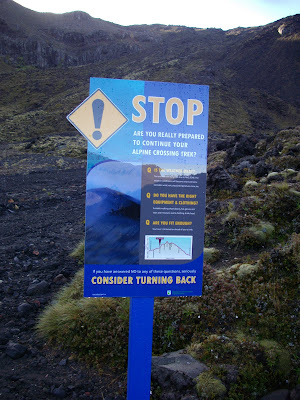 Start of the Tongariro Crossing. 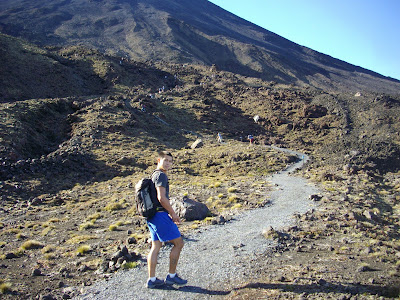 Top of Devil's Stair case which was my first test.

View from the top of Devil's Staircase.

A side trip that Taylor felt I could handle, Mt. Ngauruhoe (Mt. Doom from Lord of the Rings). Final steps as I complete the hour of punishment.

Taylor and myself above the volcanic summit of Mt. Ngauruhoe 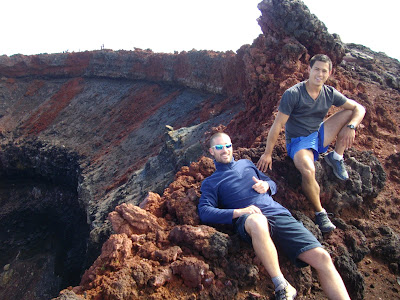 Looking out towards the massive Lake Taupo. 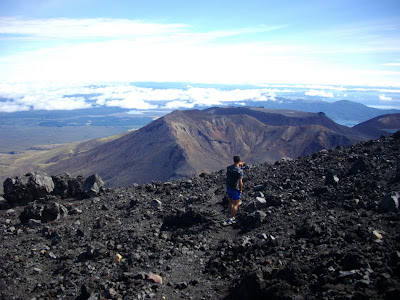 Sliding down Mt Ngauruhoe's face in 20 minutes. The video does not give it justice.

Shoes full of rocks after the slide down Mt. Ngauruhoe. 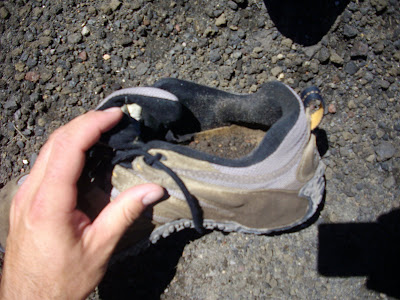 All the "Tour-ants" approaching Emerald Lake. 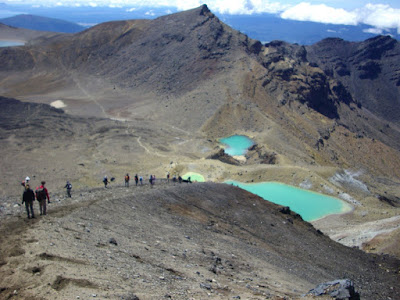 Top of the Tongoriro Crossing at Emerald Lake.

Mt. Ngauruhoe from a distance. I climbed that shit! 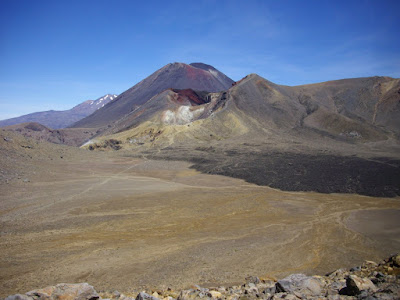 Panoramic of Lake Taupo as we begin our descent.

Near the end, not really...

Final words from the final stretch of the Tongariro Crossing

And finally a great video from the Gold medal victory by the Canadian Ice Hockey team over the USA at the Vancouver Olympics. Can you believe Canada won the most ever Gold Medals in the history of one Winter Olympic games! Even more amazing is that the ice hockey gold was the final medal of the games and broke the tie for most Winter Olympic Gold Medals in one games with 15.

If you are Canadian you must watch this!!!