May 2005, dressed in a canadian tuxedo, work gloves and Dr. Martin boots I passed my motorcycle driving test. 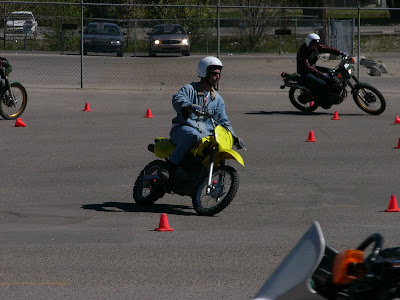 In August 2005 after trying to decide on a cruiser style bike I was introduced to a beautiful well rounded bike. A quick read on the 2001 VFR classed them in the top 50 bikes of all time, so I bought Akira and started riding...www.canam2005.blogspot.com 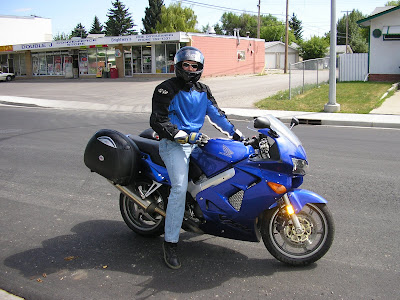 On May 5th, 2010 around 7:30 pm (Auckland time) as I was traveling in the right hand lane of the double lane 'K' Road a motorist from the left lane missed his turn and executed an illegal U-turn directly across my lane in front of me. Good reaction and hard braking were not enough as I was unable to stop in time to avoid a collision with the out of town motorist. My bike collided with the back quarter panel of the motor vehicle. We hit straight on, Akira fell right and I fell left. I got up right away and said, "I don't think that is a good place to take a U-turn." Surprisingly I was quite calm and never got angry with the motorist. We picked up the bike and I brought it over to the curb to inspect. A crunched head light and front cowling, but everything else looked alright. I thought the bike was fine to ride home and only expected may be $3000 in damage.

Not only did I ride the bike home, but I rode around for 5 more days before taking Akira into the Honda shop for review. At that point they told me I couldn't ride it anymore until after the insurance had a look. Since I hit the motorist on the side of his car it was deemed that his insurance would cover the damage, which was good because I did't have insurance in NZ(not required).

The insurance company got back to me once the Honda shop finished pricing all the parts a week later and told me Akira was a write off as the damage was well over $7000, $15,500 to be exact. Bullshit I thought and later found out Honda wanted to replace anything with a scratch including parts that weren't involved in the accident. Insurance offered me $7250 which is what I expected to sell it for in August on my way back to Canada. I decided to look at options of fixing the bike as it deserved better than a write off with so little damage. Upon my review I calculated about $3000 to $4000 in repairs after buying the wrecked bike back from the insurance company for a value of $1500. So, that meant $7250 - 1500 - 4000 = $1750 left over after repairs. Good deal? Two problems arose from this; 1) the bike would be deregistered and would need a new certification (minor risk, but still a risk) and 2) I would be leaving the country in August and may not have the bike back together in time to sell. Regardless, I decided I should buy the bike back and either fix it and sell it or sell it as is. To be continued in June...

Please have a look at my tribute blog to Akira from our trip across Canada and some of the United States in 2005. www.canam2005.blogspot.com

Now for the rest of the month...

I finally picked up a couple of film days in Auckland as an On Set PA / AD on "Love Birds" which was a NZ feature film starring Rhys Darby of "Flight of the Conchords" fame. It was good to finally get some work in Auckland as it is always hard to get started in film in a new city, especially when the two major productions had just been cancelled weeks after I arrived. Oh well. "Love Birds" was the first comedy I've worked on and the first show I almost got fired from in the first hour!

On my first day I arrived to the film trucks at 7am for the Stanley Point shoot which had a water main break scene and pier scene. I was hired to handle the extra motorists, but before all that Rhys had requested a coffee to set. Not really my job as I had no idea how he likes it, etc and hadn't even met him at this point, but I of course want to help where I can so I did. The problem was that in NZ a lot of the coffee is gourmet made, as in a shot of coffee and steamed milk, etc. Now as you may well know I don't drink coffee at all and never make it; So I grabbed one of my extras who claimed to know how and put him to work.

A typical flat white in NZ is an ounce of brewed coffee then filled with steamed milk. What I got was the whole cup full of coffee with a splash of steam less milk on top (just enough to make it spill over). In a hurry I made my way to set with coffee dripping out the top of the lid looking for Rhys Darby for my first introduction. I handed him the coffee with some napkins, he smiled and took a sip removing his smile. He asked who made this coffee and I said it was me. Of course, kiwis being a non complaining people he said nothing and I walked away saying my name again to ensure he had the right person to fire. Bare in mind that I thought the coffee was supposed to be made that way and thought he was unimpressed with the messiness of it. As I left set Rhys had his stand in throw it out quietly and ordered a new one which I witnessed being made back at extras holding where I had began the coffee mission. In the US I would have been sent home immediately, but here everyone just laughed. Later that day I had a good yarn to Rhys and his stand in about it.

Needless to say I didn't get fired and stayed on the show for 4 days over all. A good experience. 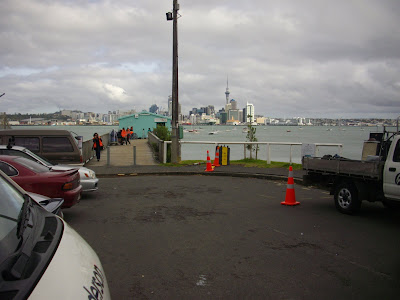 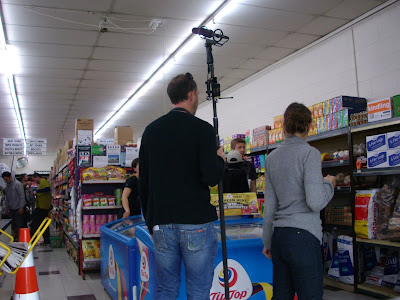 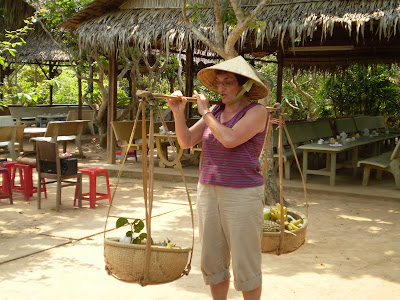 "My Mother" by Costa

You gave me everything I have today
My fears, my cares and all I have to say
Without you I could be completely lost
Without you I wouldn't have made the cross

Near the end of the month I finally made it to my flatmate's restaurant, Totara, toted one of the best on the North Shore and boasts a Gold Medal winning Lamb dish for the past 7 years. It was a delicious dinner with my guest Nicola who was passing through Auckland on her way to Denmark and entertaining to see how excited Pete was to see us and to watch him work. 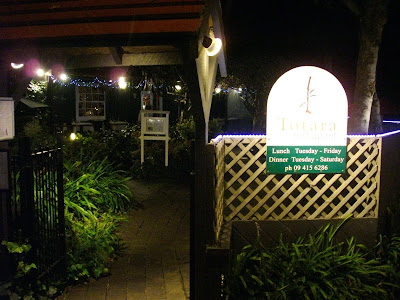 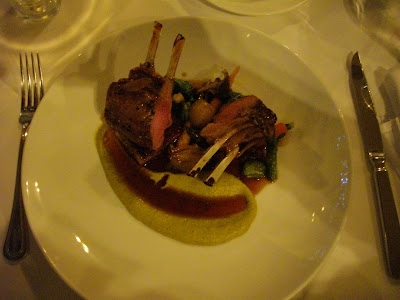 Tiger Beer Commercial as an actor?

Yes, that's right I finally scored some work in front of the camera which of course pays very well especially for 2 seconds I spent on screen.

I auditioned in mid May for a role as one of 4 sort of good looking guys hanging around a bar having a good time. A non speaking role as the commercial will only be shown in Laos, Cambodia, Vietnam and Malaysia. I was then called back for a second audition against 12 guys for the 4 spots. After no response on the deadline date I accepted that I missed out. But as things like this do, I got the call a couple days late, oh my nerves, haha. Shocked and not really that excited at first I told a couple of people about it and developed my excitement along the way. After a couple of fittings and a lunch with the director that week we were ready to shoot 6 am on a Sunday. Make up and wardrobe was complete by 7:30 am, we stepped on to set at 9 am, walked and stood around for an hour in front of the camera, had lunch, waited till 2 pm and were wrapped. More funding for thelifeofbrad.

I have added a bit of video to introduce the guys and what not, but I don't have the finished product just yet. I will post the advertisement when I get it from the production company. 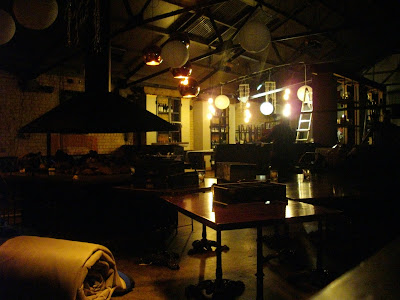 
Kiwi Ingenuity in May.

A little fun fact for you that Kiwi's are know for "making do" with what they have to work with and it is often mentioned as "Kiwi Ingenuity." 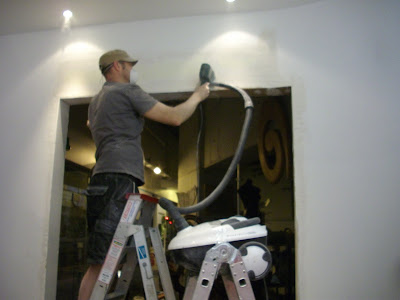 Two University girls picking up a mattress they bought from us on Tradme. A queen size stuffed in to a small SUV on a rainy night. In order to fit it in the car completely both the driver and passenger had to sit on the bed all the way home instead of the car seats. I wouldn't have believed it unless I was there. 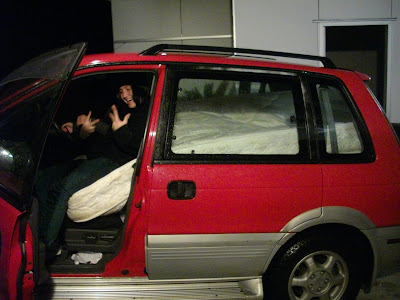 Great post, love it! Really sorry about Akira, but at least you're okay! Two thumbs up for your latest film work experiences!!!