Whether it was on the ocean fishing, on the slopes skiing, getting rained on at a rugby test, partying on a boat in the West Harbour or sailing in the East Harbour the month of July was played out to a water theme.

Early in the month Pete, Jimmy and myself finally got out in Pete's zodiac for a fish. Sure it was winter, but the sun was shining and the water was calm (enough) so we entered from the beach in Army Bay on the Whangaparoa peninsula about a 30 minutes north of our place for a 5 hour attempt at some fish. Great scenery and some fun moments made for a good day out. Plus, a blast around on the unsinkable zodiac as an added bonus. 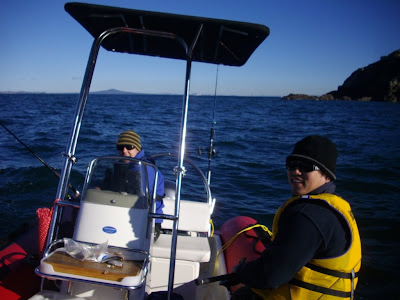 Video of Pete's fishing tradition for the first person to get the first catch.

In the middle of the month a trip back to Welly was in order to see the All Blacks play South Africa. This game was part of the Tri-Nations rugby which pits NZ, Aussie and South Africa in a 9 game tourney with the winner obtaining the title for the year. Considered the best rugby in the world.

Side track: On the way down Ben and I had a quick stop in Turoa for a ski on Mt Ruapehu (an active volcano right beside the Tongariro crossing which I did in Feb 2010). My first time skiing in NZ.

To sum it up the condition were poor and with only a half day to ski I opted for the trial run package which had an admin fee of $10 if you wanted to return your gear and get your money back. With rainy conditions, poor equipment and a lack of love for skiing I got my $10 worth, returned my stuff and got my $95 refund which would go towards beer later on in Welly.

Ben and I taking in the beautiful rainy conditions. The sunnies are not because it's sunny! 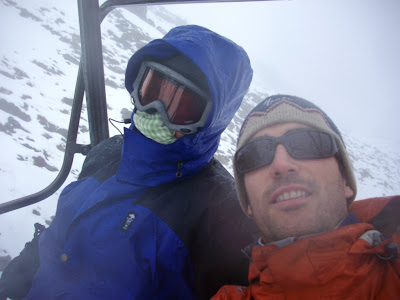 Can't remember what these things are called. They aren't uncomfortable, but just seem wrong. 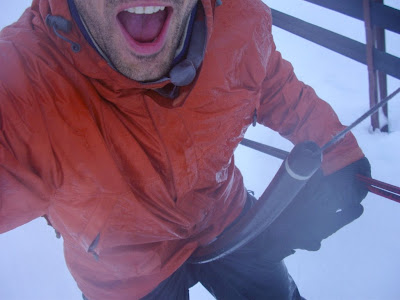 Video taking a lift up at Turoa Ski field.

Ben in action on the path back to the chair lift.

Haka time, and the NZ All Blacks vs the South Africa Springboks July 17, 2010. Game 2 of 3 where the All Blacks had a 1 game lead from their win the week before. Unfortunately I couldn't get a ticket to the Auckland game so I made me way to Welly.

A spirited affair with the expectation that the Springboks would be very strong and ready for the ABs this time.

Check out the crafty All Blacks display in the crowd 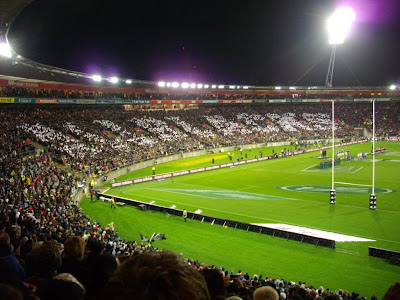 Video of the world famous Haka which is performed towards any NZ opponent before a match. I recommend you watch it.

A bit of the action. 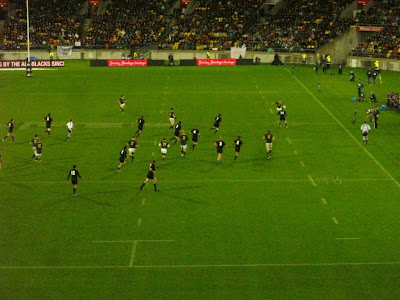 A well desired AB victory with some great passing and great scoring. Again the ABs were too much for the Springboks and never seemed to miss a beat as they lead the entire time.

Although it was Phil and I at the game, here's the rest of the crew after for drinks. Jemma, Phil, Ben, Jane. 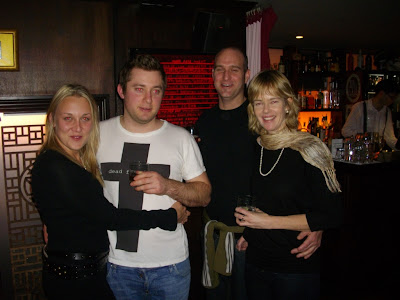 In the tour guides they suggest that the country lives and breathes with the ABs, but I haven't noticed that to be the case. To be fair it is not the World Cup, but I sure enjoyed it. I expect the Cup will bring everyone out next Sept 2011 (hosted by NZ). That should be awesome!

Back up in Auckland and on the water again I got an invite to a party on a boat anchored in the middle of the West Harbour. Although it was late I figured the mission of rowing out to the boat and getting the views of the Sky Tower and the city were well worth it. We made our way to the boat via a dingy who's motor would have gotten us there in a few minutes, but unfortunately was out of commission. Instead we used manpower to row the 20 min, fully loaded, to the party boat. 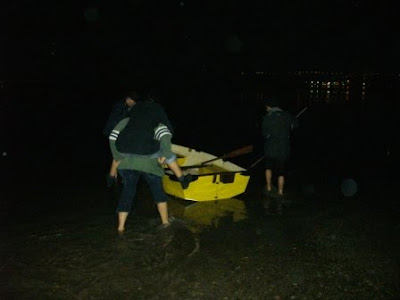 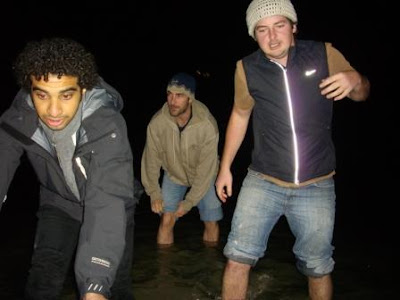 One oar each was not perfect, but interesting regardless. 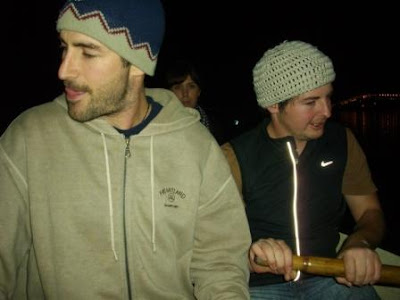 The Harbour Bridge turned out pretty good considering it was at night and the boat was pretty rocky. 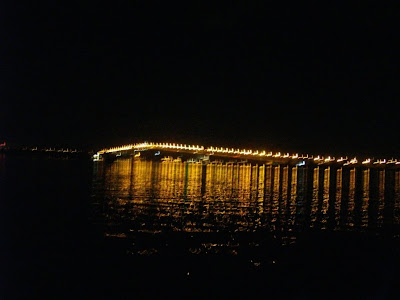 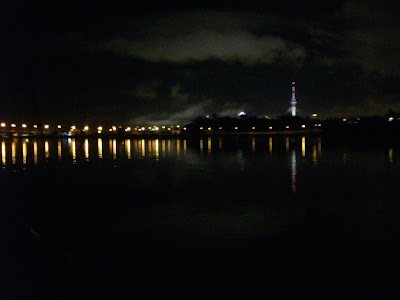 On Nathan's party boat as he takes a bird's eye photo of us. 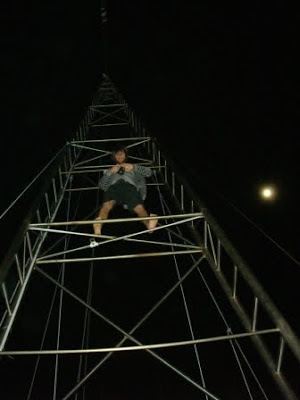 Sorry, no video of the party boat as it was pitch black.

Near the end of the month I finally got on a sail boat in NZ. I can't believe it had taken this long and what better way to get amongst then a full on race!

Through a friend of a friend I was put on to Rupert the captain of High Octane. Rupert has been sailing for years and then some more and had just returned from 3 months of sailing in the Mediterranean where he has another boat. Cool! Anyhow, I was asked to join and I jumped at the chance even though I would be used mostly as weight transfer.

I got to the boat and helped prepare for the race, jumped on and spent a couple hours in the East Harbour amongst the other avid sailors and boats in the Auckland community. We had a fantastic day considering it is usually raining in the winter. A great first time with lots of sun and definitely not the last time. We finished 6th in the top grade which was good. 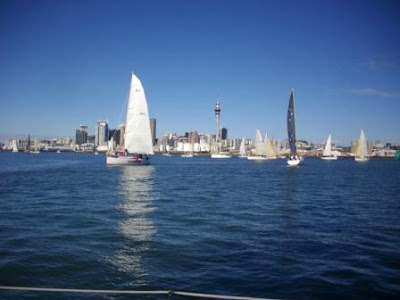 A couple of boats in front of us. 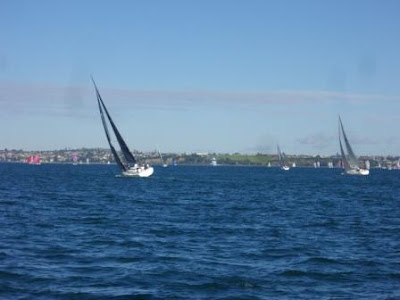 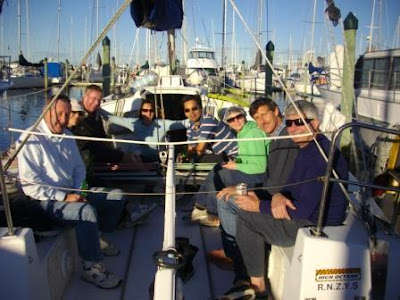 Gladiator auditions for Spartacus (new show on American TV, you will hear about it as it is very good!). A 3 hour test of coordination, fighting and listening. I thought it would suck, but it was so fun as we even got to play with wooden swords just like in the show, oh yeah.

Unfortunately I was not allowed to take video so this is all I have.

Wellington second floor port-a-loo on an over hang. This just seems like a bad idea. 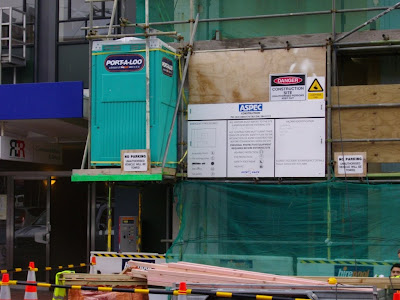