April 2011 was full even though it didn't seem like much was happening. My mother finished her visit and went back to Calgary, another Rebel sport catalogue came out, my TVC with Dan Carter hit the air, a couple of scenic adventures and my debute as a Stand Up Comic.

Another Rebel Sports catalogue for you to have a chuckle. 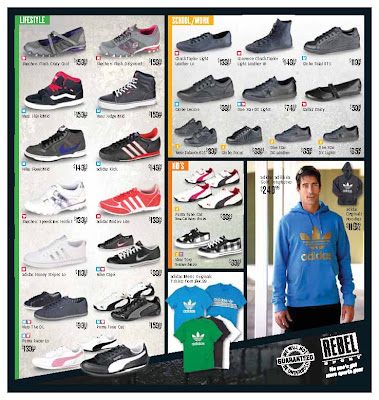 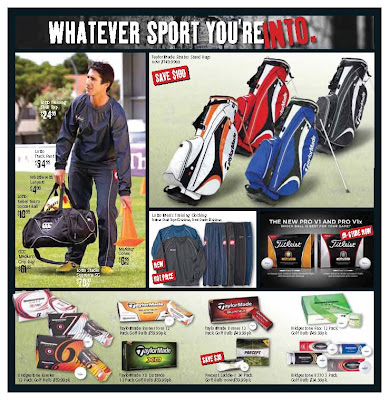 Then, the long awaited TVC for Daikin Heat Pumps featuring the biggest Rugby star in the world and nice guy, Dan Carter (Fly half and kicker for the All Blacks). Being from Christchurch he was actually the first person I got to speak to about the earthquake who had seen the destruction first hand. What a mess. 163 people died and about $12 Billion is needed to rebuild the area. Dan was good enough to put a couple families up in his house in the short term. Good on him.

As for the shoot, it was a good day and Olivia playing opposite me was a real pro. Man, she can turn her smile off and on like a tap!

Enjoy and try to spot the continuity error

A nice Sunday at Rangitoto Island in the Hauraki Gulf 30 min from the Auckland City centre.

The youngest of the Hauraki island emerging around 1300 AD from a series of Volcanic explosions. It took us 2 scenic hours to get up to the 260m summit going the long way. Rangitoto means "the day the blood of Tamatekapua was shed". Tamatekapua was one of the first Maori settlers in 1300s and the quote refers to battle in the Auckland area. 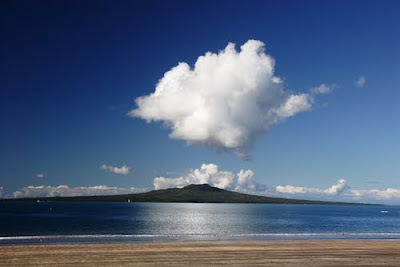 The island is now a conservation site with a few batches, but not much else. It's about 4.5km from the mainland and poses a good swimming challenge for crazy people! If you like volcanic rock Rangitoto is a good place to be. Oh, and bring your bathing suit for a dip off the nice beaches.

As we arrive by ferry you can see hundreds of swimmer along the shore preparing for a Sunday swim from Rangitoto to Mission Bay, 4.5km. I'm not sure if it was a race, but knowing Kiwis I'm sure it turned into one. 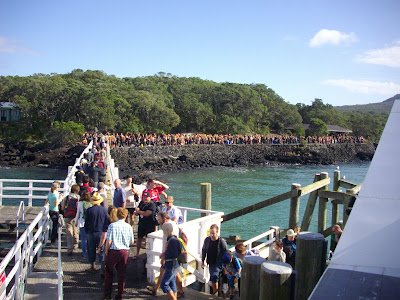 Me and Lenka happy to be on solid ground. 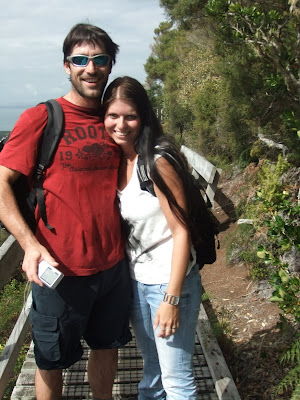 Getting close to the top!

Made it! Lenka, Eliska, me 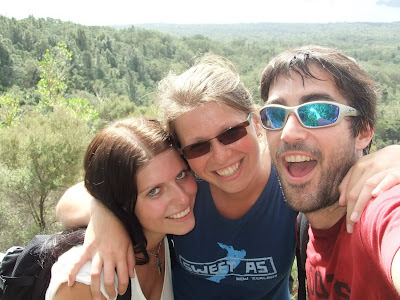 360 view from Summit of Rangitoto

Over Easter, I dove the Mikhail Lermontov, a Cruise ship that sunk in Port Gore 10km from Picton on the South Island in 1986, which was on my bucket list in NZ.

Being Easter weekend everything was booked up. The original idea was to take the bike down to Welly and ferry across, but the days I needed were totally booked up and expensive ($115 each way). The bike trip would have cost $450 with petrol and with limited travel times I flagged the whole thing including $650 for 3 days of diving. On a whim I checked out flying and found the only cheap flight was the exact flight I needed. $104 to Nelson, which left 2 hrs to hitch hike to Picton in 5 hours. Sounds alright, and then Go Dive in Picton offered $450 for all the dives, food and accommodation, so I decided it was all go! Flew down to lovely Nelson, paid $17 for Airport shuttle (BS!), got dropped at hitching spot where two people had been waiting for 4 hours, so I turned around and walked back to town for a bus ticket $24 to Picton. My goal was to stay well under $450 travel costs, which I did after the weekend ferrying back to Welly $56 and flying back to Auckland $79 for a total of $280 + $450 (Dive costs).

1 hr flight to Nelson with Mr. Exciting beside me. 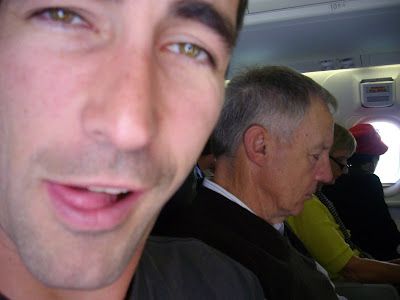 Why did I do this? To dive the 155m, 700 passenger Mikhail Lermontov of course. Biggest wreck dive in NZ sitting in 38 m on it's side with the first contact point at 14m. Just awesome. Aside from the 2.3o hour windy drive out to Port Gore which was only 90km and a battle with car sickness everything else was great. Although the best visibility is in winter it's pretty chilly, so I was happy to be diving in 14C and took on the challenge of 2 to 5 m visibility. As well, there is very little light in the wreck and down the sides which added to the challenge. Being a rookie to serious penetration dives I thought it would be easier than it was. Unfortunately the ship had been sitting for 25 years so lots of sedimentation stirred when you kicked too much. sorry dive buddies! My first penetration dive in 2 years, which Brent, our guide, really threw me in the deep end on as we went into the pool room. Typical Kiwi way! Although it was tough, especially because the ship was on its side, I enjoyed the challenge. 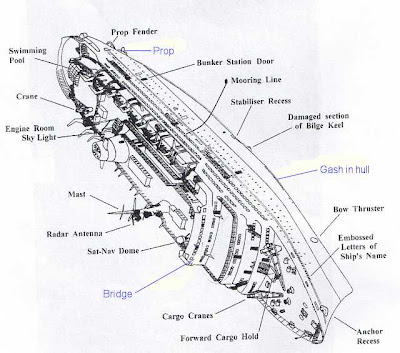 In total we only managed 4 dives as the weather packed it in on the 3 day. Fine by me and everyone else as the 4 dives were plenty in cold and rough waters. At 45 min each we dove the Pool, Bolshoi Lounge, Bow and Props (dark and spooky as you swim into a prop 3m across, 10ft), respectively. Between dives we went back to the lodge for lunch and a nap (for me). That's the way to do it!

Coming back from a dive in the 6 man boat. The Lermontov site is just around the bend to the left. Also, you can see the mussel farms to the right which fill this area of the Marlborough Sounds. 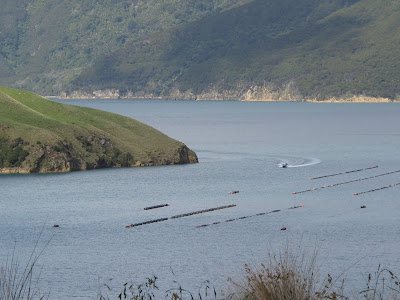 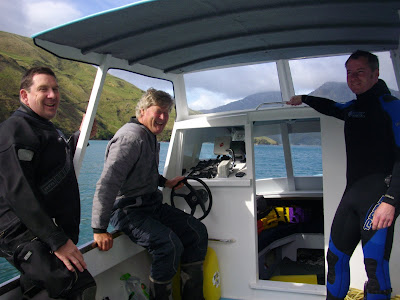 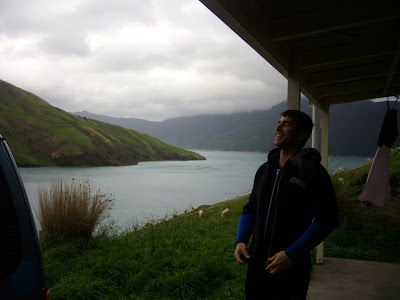 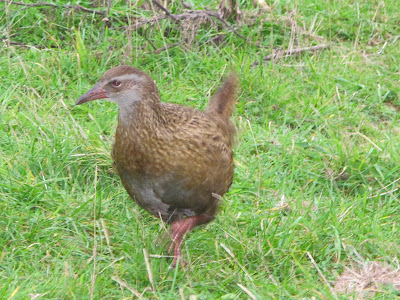 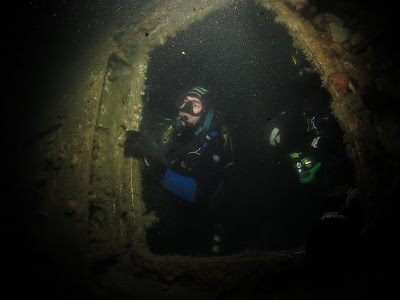 An idea of just how dark it was. 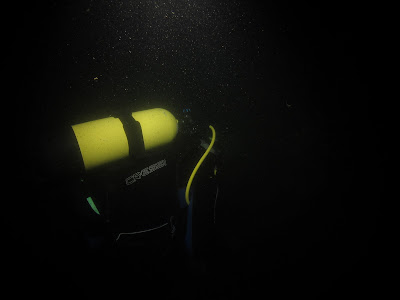 Great photo of a Star Fish. 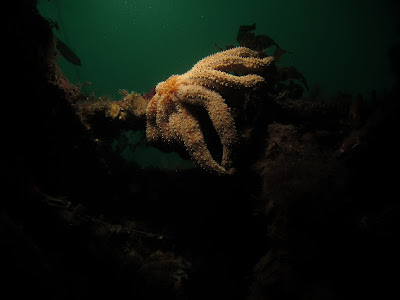 I recommend "Go Dive Marlborough" in Picton owned and operated by Brent McFadden who has well over 500 dives on the Lermontov alone and 5000 to 6000 dives around the world. He's a good dude.

Finally, My First Stand Up ever! The Fringe Bar in Wellington April 25, 2011.

What can I say? I had been preparing for this for a while and was set to go on in Auckland on Wednesday May 4 at Snatch bar, but knew the Fringe Bar would probably be a better first attempt.

I was not confident at all as I had just come from a practice set in front of 3 friends in their living room to NO laughs! Yikes. But we went down anyway and I met with Jerome Chandrahasen the comedian coordinator. Full of nerves and the thought that I was done with comedy after bombing earlier Jerome explained there were no more spots for the open mic that evening, but if someone didn't show... So, Phil and myself who had paid $5 each waited with a beer in hand. Apparently I would get the $5 back if I went on stage so there was some motivation.

Nervous moments passed as I waited to hear it is was happening or not. I probed Jerome 20 minutes later and he said there were no spots... but then he saw my arm full of pen marks and notes knowing that I was indeed prepared and quickly changed his mind to say "we'll fit you in". So, the nerves were not to be wasted and I headed backstage behind the curtain with enough energy to knock a house down.

I was put in 3rd and waited for the people in front of me to do their thing. I couldn't even focus on what they were saying as I tried desperately to remember my words in between a sporadic push up to help release the energy flowing out of me. I was forced to drink water as my mouth was too dry to drink my beer, crazy, and then I faintly heard "Brad Costa".

The nerves fell off as I made my way to the stage and began with a look in to the crowd and the words "Holy Shit", which got a good laugh and it was on from there. I did it!

Just the last two jokes which of course are the least funny, hahaha!

Photos from the Auckland Ice Bar on the waterfront. Set at -4 C it's no wonder they give you jackets as you do feel the cold after 10 or so minutes. $20 for 20 minutes and a cocktail served in a glass made of ice. Although you're not allowed to take photos, so they say, we opted to take a couple sneaky ones instead of paying $8 for a barman/photographer shot. Who's better at sneaky photos? 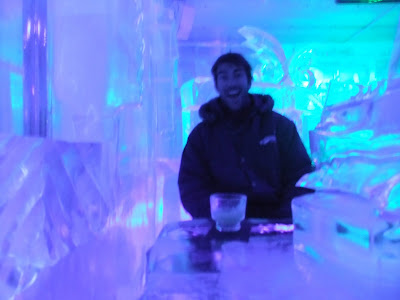 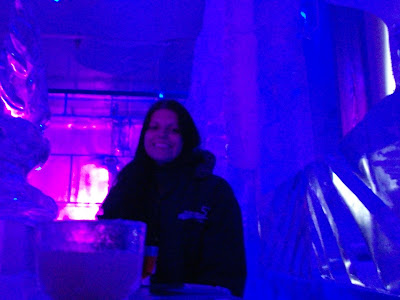 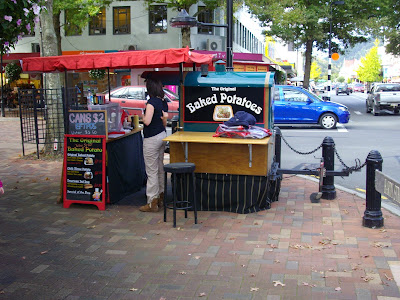 Also in Nelson. "Tasty Buggers" boasts an extremely funny and / or gross name if you know the history of the word "bugger". The word buggery which is closely related to sodomy means that you could think of "Tasty Buggers" the restaurant as "Tasty Sodomisers". Funny and gross. 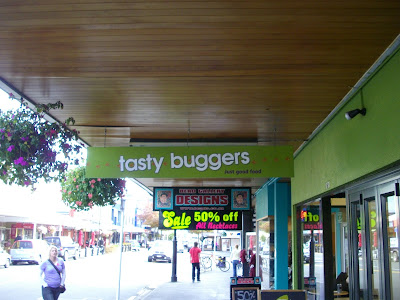