July 2011, Getting back in to the Calgary routine

Well July took an unexpected turn. Of course there was Stampede one of the biggest parties in the world, but before that there was a job thing, wtf? And after another motorbike, wtf?

Nice to be home and see my mother and brother and all my friends. Also great to be back in Summer! My first days back were incredibly busy reading up on South America trips and getting my head around it all. Quite daunting I must say. At first I was thinking I may bail on it do to danger along the route, but blog after blog switched my mind back to the great adventure. It's on!

JOB! After more than 2 years since pushing paper at a desk or having any steady work for that matter, I stumbled in to an Engineering job again, not because I need money for my trip, but because I may need money when I get back from my trip :o) I had sent feelers out early in July for a part time job doing whatever to keep a couple bucks in my pocket while I got ready for my trip. Initially my friend Dave Bainbridge in Vancouver responded saying "work with me as an engineer in Van" which sounded great, but would have made my trip prep hard and ended up developing too slowly for me to dedicate 2 full months he needed out of me. I couldn't believe I could entertain a short term position, but they are out there. So, I turned my attention to an opportunity to work for a guy I always wanted to back in my Colt days (2001 - 2005). Art Harms, who is considered one of the best Pipeline guys around and probably one of the guys I see eye to eye with more than most was looking for people. Thanks for the tip Tom A.

Now I don't need to tell everyone the secrets of life, but a good rule for work would be "Work with people you like and a boss you respect". That's Art. We had a lunch interview/catch up just before Stampede with a fear in the back of my mind that I may need to start working ASAP. Yikes! Near the end of lunch Art was happy to offer me work and promised some flexibility so I could keep on my trip prep at the same time. Oh and he mentioned (with out me asking), "you should start after Stampede". Hallelujah!!! I paid for lunch and Art gave me a $2 raise on the spot. See how much alike we are, haha! Note to all, if you need something from me buying lunch is a clincher.

Stampede 2011 (July 7 to 17) was as good as usual. Having a pending job give the credit card a long leash. I managed to get 4 days of stampeding/drinking in at the bars and company parties. Good times!

Day 2 of 10 (Saturday) - Kidnapped. Started at Ranchman's waiting in line for over an hour when Tom H and myself decided to give up and try another bar. As we were leaving Tom asked the bouncer at the patio a couple questions which followed into a discovery that the line we were in was ONLY for the inside bar and there was no line for the patio, shit! I'm a patio guy anyway, so we jumped in to the patio immediately. Upon entering 16 girls on a stagette set us up, allowed us to first drink a beer and then whisked us away to Cowboys for the night. Good times. Thanks for the rounds Jesse and the photos, nice work fellow hostage.

In the big stretch SUV limo on the way to the next bar, Cowboys. Nothing like a limo that holds you and your closest 20 friends. I think it was my first time in a limo, that I can recall. 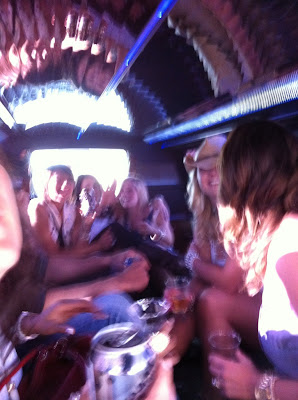 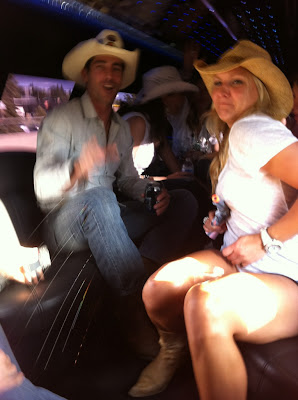 Day 3 (Sunday) - Party Crash Part 2. In 2009, Algernon Wilson and Brad Cougle did a proper job of crashing a Stampede Party held by Canon Copiers (Party Crash 1, middle of the page http://thelifeofbrad.blogspot.com/2009/08/july-2009-calgary-stampede.html) and in 2011 we were doing it again. This time unlike the last time the party was much bigger. Fortunately we had both attended in the past, but of course had no invite this time. Algernon figured if he had swag on from the previous years there would be no questions asked.

Pre-game outside Melrose Bar getting our heads into the right mind set. 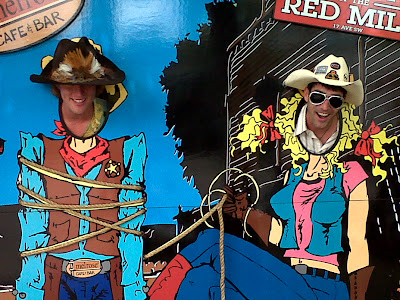 You would never know it, but Alge actually gets quite nervous about 5 min before we even get to the gate and he begins discussing our story and plan over and over, then goes in to a no listening focused trance as we cruise in. As we approached chose to go directly to the registration table at the front gate (best to get it over right away since everyone had name tags on and it wouldn't have been long before we were shown the exit gate). Basically what we did was...

Yahoo! we made it. Party Crashers 2 was a success. Free Beer, Free food (great food including Corn dogs) and free entertainment, Randy "fricking" Buchman from "The Guess Who" and "Buchman Turner Overdrive (BTO)." Easily one of the biggest private parties during Stampede at an estimated $100,000 plus spend. Great party! Thanks Jim Kinear as always. See you next year.

Oh, the smugness of success. 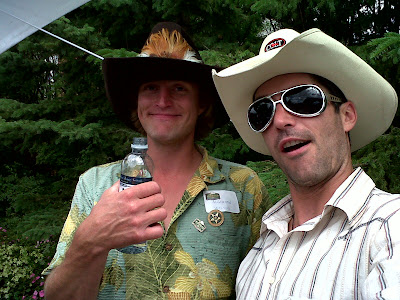 Paris Hilton and I showing tats. She even acted like Paris, what a nob. 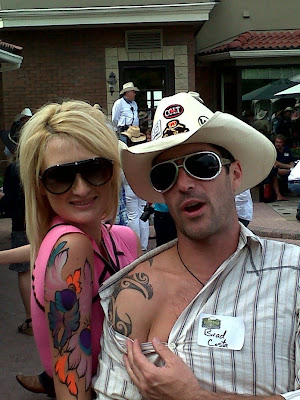 After the party we picked up CK and made our way to Cowboys for Tom Cochrane another Canadian singing Legend. Unfortunately, Alge had spent his party at Jim's house during the day.

Best photo of Stampede. Alge on the ground outside Cowboys (we some how managed to get him inside after this little moment). Reminds me of what a bird looks like after it's been hit by a car. 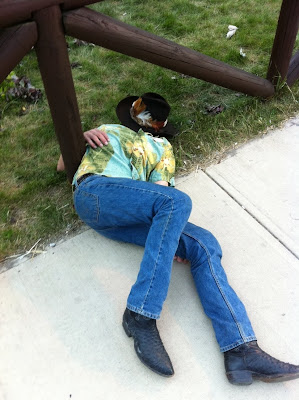 Tom Cochrane on stage at Cowboys 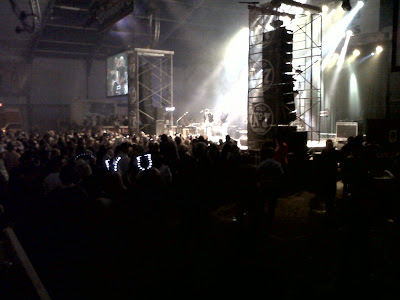 Tom Cochrane playing "Victory Day" and well known for "Life is a Highway". Youtube it.

Day 7 (Thursday) - Wild Horses Come Together. Big day starting at 12:30pm Billy got us in to the IPS free food and booze party which went till 4pm. Then next door to the Wild Horse Saloon, a party tent set up on a parking lot exclusively for Stampede (Bikini Contest 2009), where Billy, myself and Alge met up with Tom Anderson, Peter Strickland and even ran into my brother. It was a big night and so much fun. Good to see everyone in fine form especially Pete and his human bowling game.

Early in the day at IPS party. Alge and I showing support. 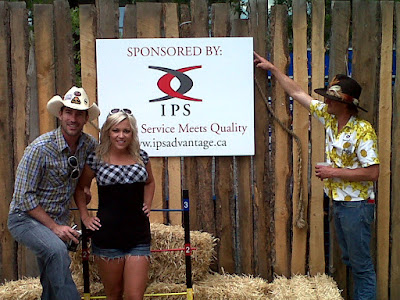 Me, Alge, Billy Dog and a couple beers in.

In line for the Wild Horse, some of the stampede footwear. Alge is on the far right, I think? 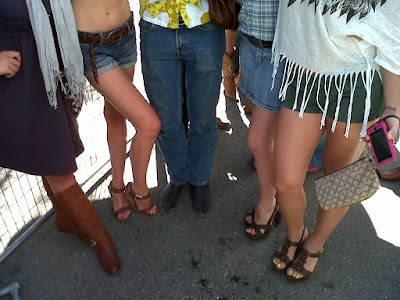 Day 9 (Saturday) - Big Party Here! Last party of Stampede 2011 (for me anyway, it is possible to go out Sunday too). Back to the Wild Horse with CK, Tom A and girlfriend Pam for another good time. One of the highlights of the night, a young team roper from Texas bought me and these 2 girls drinks just for telling him he forgot his card in the ATM. Nice one! Everyone is so nice during Stampede, it's the cowboy way I guess.
CK on form 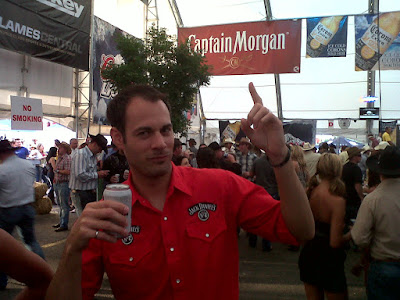 Stampede girls Tanis and Meaghan having a sweet dance 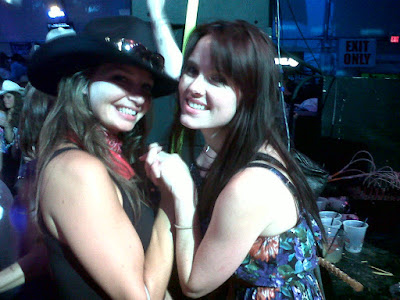 New Bike, Really? Yep, I decided that my KLR 650 wasn't going to cut it for the trip considering I'm planning to do a lot of highway kms which is not great on the KLR. In addition, it's a little too different a style for me and would need too much care and attention on the trip so I searched for the only other option in the $5 to $6000 range. If you know me well or even a little you will know I'm a Honda superfreak, but unfortunately Honda doesn't provide something in my price range and style in Canada. They do offer something, but it's a dirt bike really. I was forced to go Suzuki and went after a V-Strom 650 which is an 80/20 on road/off road, maybe even 70/30. Perfect for the trip albeit a little heavier and bigger (better in the wind).

I looked around for a couple weeks and got pretty close to buying in the upper range with low kms. Then I waited considering the KLR again and how much I did enjoy it. I was hoping for something to come along with 20,000km and some scratches. Bingo!!! A 2008 V-Strom 650 with ABS at a lower price with some extras I would have needed to fit on the KLR anyway. Perfect! Except it was in Medicine Hat (3 hrs away). Not perfect. But wait, I have a cousin who rides motorcycles in the Hat.

Steven Pudwell the cousin who got me in to "Tears for Fears" way back in the 80s and always was the coolest guy I knew was able to help out. I got a hold of him and he checked out the bike, it was good, I sent him the cash and he put it in his garage until I could collect it or he could ride it up as people tend to come to Calgary more often than people go to the Hat (Steve to Cal every 2 weeks, Brad to the Hat every 2 years). Hope to see it soon... 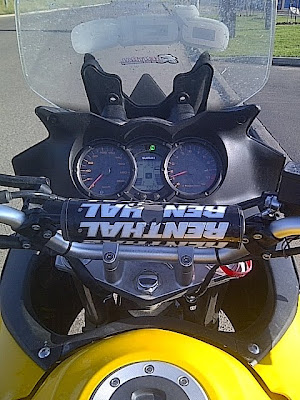 Stay tuned for a Cherry Pop on a Canadian Comedy Stage...