August 2011, Comedy and the Next Life for a Costa

A mixed month of August to be sure.  At the beginning I performed for the first time on Canadian soil, in the middle I switched motos for the trip to South America and at the end my grandpa finally found peace after 3 long years in a wheel chair inside the confines of a care facility.

Finally after 8 Stand up Comedy go's in NZ at open mics and 4 or 5 weeks of going to Comedy Monday Night at Broken City I got my act together and made it on stage.  The routine has gotten better since the first time, but I still have a ways to go and hope to get into it a bit more when I return to the English speaking world in May 2012.  Have a look, it's rated M for some bad language.  I'm not F&(*ing Cosby!

New bike in town.  Bought in July and delivered by my cousin Steve I was very happy with my new moto for my trip.  Much sportier and more technically advanced than the KLR this guy, "Bumble Bee" is going to fair well for my 30,000+ km trip to Argentina.  Although 90 lbs (42kg) heavier and not quite as nibble in the dirt this 2008 Suzuki V-Strom will take me down the Pan Am Highway in style.  I just hope no one gets angry about the sticker I can't seem to get off the side. 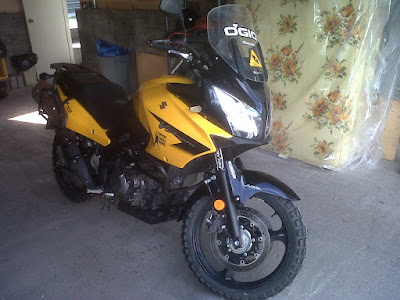 In with the new and out with the Sold.  Another bike moved from my hands which was the one initially bought to take me to Argentina.  Although most canadians going this year have KLRs I found mine too needy and too much of a departure from the sport tour world I have known the last 6 years.  So I had to move on.  The best part of this motorcycle chapter was that I sold the bike the same weekend I received my V-Strom and I was lucky enough to sell it on to a fellow touring rider, Jeremy Kroeker, who penned an account of his trip to Panama and back in 2003 called "Motorcycle Therapy".  A good read for sure.

"Comet" didn't have to go, but another really wanted him. 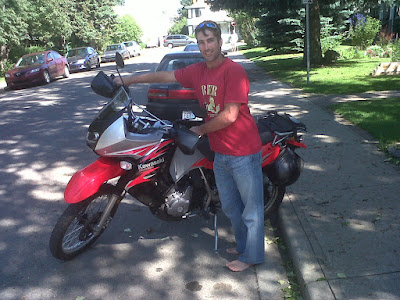 My Grandpa's time.  Everyone has their time on this planet and I strive to get a lot out of my mine.  Everyone has a different way and my Grandfather's way was to enjoy the prairies and the peace of the fields where he farmed for over 60 years.  I may not have his committment to working at the same thing for that much time, but I hope the things I pursue will be done to a standard I can be proud of as he was when it came to farming.  Well known and loved in the community my Grandfather never asked anything in return of all that he helped along the way.  That's a lesson I learnt at his funeral and one I hope to follow...

A nice photo of my Grandma caring for Grandpa in his last days. 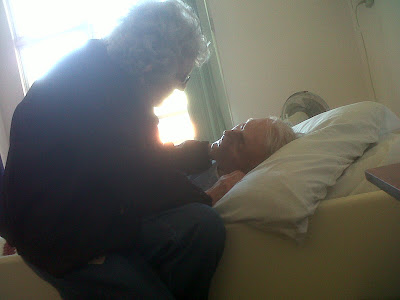 On the day of the funeral my mother scooped up a handful of soil from one of Gramp's fields.  She placed the soil and a can of beer in his coffin following Gramp's lead who left a mickey in my Great Grandfather Luigi's coffin.  A beer will be fine for me too, but it better be a good one and 500 ml at least! 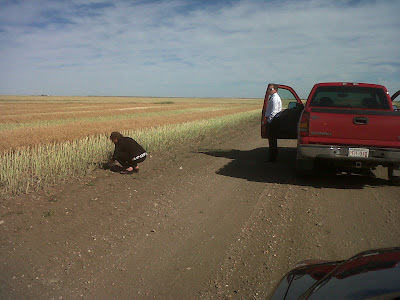 Classic: We loaded Gramps in his last truck which my mother was determined to keep until he passed.  It was a well respected gesture by the small town people of Eston. 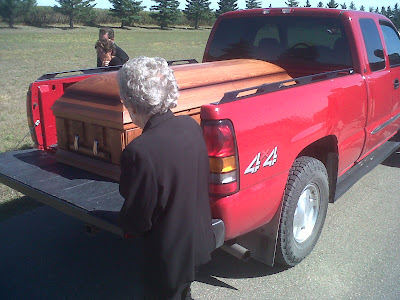 Summer 2004: One of my absolute favourite shots of my grandparents at Humpty's in Kindersley.  They didn't realize I was snapping away with my new digital camera.  So, great, soooo great. 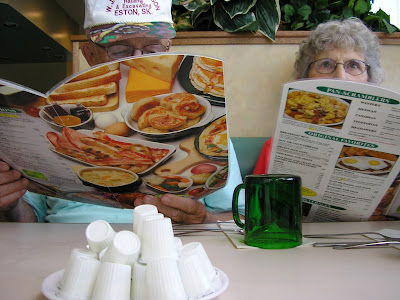 Peter was born in Netherhill, SK where he lived his younger years.  He was proud to be a farmer in the McMorran area.  He married Emma Mazzei on December 28, 1944.  Peter leaves to mourn, his wife Emma a daughter Bonny and two grandsons, Brad and Derek Cougle; one sister Toni Clark; four nieces Colleen Trotter, Lana Clark, Gloria Park and Valarie Clark; brothers and sisters-in-law and numerous nieces and nephews.

At the end of the month I joined the Colt (Worley Parsons) team once again for the year end baseball tourney.  This year's theme was Jersey Shore with top honours going to Darryl and his kick ass neck chain.  I guido'd up pretty hard slicking my hair back and strutting a wife beater sponsored by Malibu Rum. 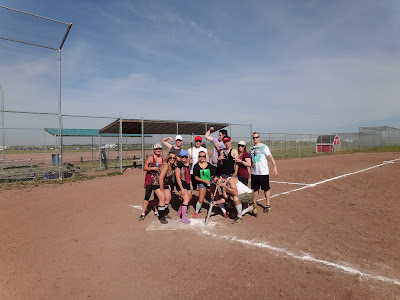 The amazing and endlessly talked about 5 star Dorothy B & B.  Reservations are impossible and I've been on the waiting list for years!