The Life of Brad has seen some sad moments these passed months.  Unfortunately not all days can be good ones and normally I only write about the good, but this month started with a shocking death and then recovered with some positives and moments to appreciate.

Early in the month on the way to a nice afternoon game of golf my mother called me up out of the blue.  I asked what was wrong and she replied that one of my brother's best friends had died.  I was in shock as I had just seen him 2 months before and had a couple of beers with him and his wife.  It turns out he took his own life.  Initially anger overcame me and I still don't know when I'll accept this loss.

Jeff Douthwright passed away due to his own hand in early September leaving behind a 4 month old and young wife.  I did not attend the funeral as I was still too mad to go.  I'm probably wrong to do so, but when I think about any parent leaving a child it crushes me.  If you are giving the miracle of life it's your responsibility to make sure it gets the best chance you can give that miracle.  It's sad that Jeff is gone and I apologise for not supporting everyone in this time.  I truly enjoyed hanging out with the guy and I still can't believe he is gone.  I wish nothing but the best for Karen and Braden and hope everyone truly appreciates this life we have... 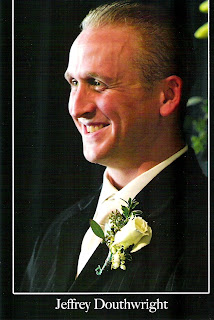 
On to the lighter side of life and my return to the Calgary Corporate Challenge after 5+ years.  Basically, a Corporate Olympics which puts some good athletes and some not so good athletes together to compete in 20 or so events from Truck Pulls to Crib Tournaments (whoa).  I was on V-ball, Darts (Bronze), Bocce, Mini Golf, Horse Shoes, Foosball (Silver) and Soccer (Puked after the game!).  It's a good time and I recommend if your company isn't doing it they should.

Opening event, The Truck Pull.  Unfortunately this girl ran in to my shot and it was the only one I had ;o( 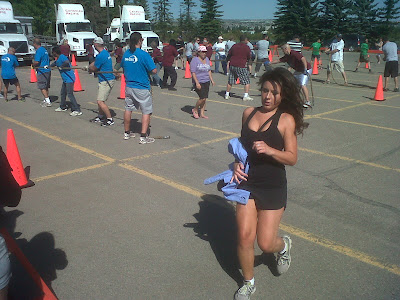 John Estepa nailing a "double 3" to move us in to the next round in a super tight match.  We all thought each of the first 2 darts were in.  Have a look at that grouping. 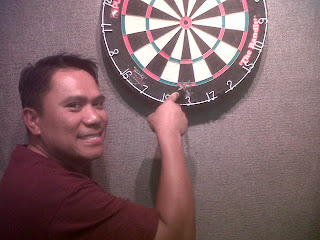 Foosball Silver Medalists.  Me, Mike C, Ian, Pat G, Kristina P and Chauntel.  Unfortunately I didn't make the cut to play in the final so it was hard to watch the Gold slip away when you can't do anything about it.  It was even worse to see a guy from Engineering that I used to beat soundly win the Gold.  Side note: Mike and I got revenge on them in a friendly match at the end of the night.  Next year Pason Systems, next year. 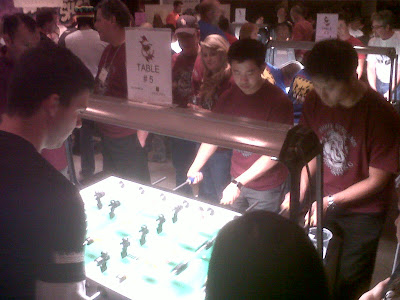 Winning the Spirit Award for the White Division