Before we arrived in busseling Guadalajara I had the pleasure of riding Hwy 70, which you wouldn't think was a pleasure from the start of it as it takes a while to get through the pot hole filled road out of Puerto Vallarta.  The first section is a bit rough and full of switch backs as we began the climb from sea level to 1500m (Guadalajara).  NV to Mascote C7/8R4T3V7.

A piece of road somewhere between Nuevo Vallarta to Mascote 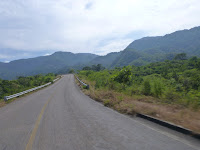 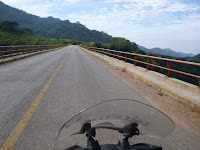 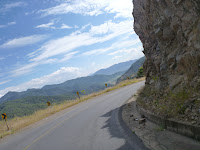 Arrived in Mascote leaving the pavement behind for cobblestone streets.  No problem with that, but...

where did the highway go?

HIGHLIGHT - pulling to the side of the road to pee 20km out of Guadalajara I heard vicious barking from two dogs when I slowed to a stop.  I looked right to see two mean dogs coming out of the farmers yard and straight for me, FUCK!  I'm glad I still had the engine on (The pee was safely back in side for about 2 more hours!)

Made it to Guadalajara where I planned to learn the entire language of spanish, tune the bike and go to the dentist.  Plus Alex had a bunch of plans for me like going to Wrestling (Luchas), Los Toros and Lake Chapala.

Alex's sister Vero was kind enough to pick me up and take me to a Dentist in rush hour traffic.  $90 for a check up, cleaning and x rays.  Apparently Doctor Mario was recommended and spoke english.  He was very nice and pretty good too.  His english was definitely good enough and I helped him out when needed.  There was a discussion about changing a filling, but the risk of opening a can of worms (root canal like years ago) and his hands working like a Mexican taxi racing around Guadalajara helped me decide everything was good at the moment.  May be in Colombia...

After the dentist it was off to dinner at Vero's restaurant (La Finca de Adobe) and then on to Los Luchas. 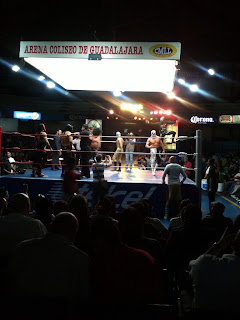 Luchas!  The Tuesday night action at Guadalajara's Wrestling Arena is awesome.  With two classes of people; the ones who pay for the floor close to the action and the ones who cheap out 30 pesos or so and get stuck behind the cage surrounding the second floor.  Chants of "Take the bus home" to the Second floor and returns of "Your mom drove me here" fill the room when the action is not grabbing attention.  Highly skilled Mexican wrestlers take to the air like Chris Jericho did when he was wrestling in Mexico.  Oh and I shouldn't forget, if you are a pretty girl the crowd will turn on you and ask you to stand up and shake your thing.  A very entertaining evening.


Sorry you can't hear me that well, but I thought the video was worth posting so you can get a feel of the energy considering there is less than 600 people in the place.

Let's get this MOFO tuned up!

Through Alex I met Sergio and then on to his brother who is a mechanic these days after getting out of the telecom world.  Initially I didn't see a smile on Salvador's face, but I think we really bonded by the end of the day.  For his shop and assistance it was $40 for the whole day which included driving around for coolant and brake fluids that Guadalajara doesn't stock.  No Dot 4 to be found!

Rush hour on the The Periferico (Guadalajara's Ring Road C1R3T7/9V2).  What a mess and a good place to get a flat...


Gas Suckess.  Needed to move tank which was full of gas so a siphon was required.  I took over from Salvador as I wanted to try for my first time ever.  Tip: make sure you put the tube in the gas or you are sucking fumes which is no good unless you are trying to get high.


Of course right after I tuned the bike and it was all ready to go the next afternoon on my way to meet Kuka for lunch and sort out my Mexican sim card (which was a pain and not worth it for the $15) I got the biggest flat.  As I was riding I heard this explosion below my bike and thought my spare rubber hose had jump through the wheel and was gone.  Unfortunately it was more than that.  I was on the Periferico with no chance of turning around for about 5 km or so.  Long story short, I ran away from this clinic that I originally was getting help at as things got dodgy and limped back on a side road to a Pemex gas station and found a Llantera next door.

The team out in Tlaquepaque Town Center 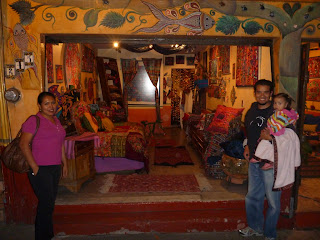 Seeing the effects of Tequila on me, Alex figured we should probably visit the town that started it all.  About 30 min out of Guadalajara you will find the quaint little town of Tequila where all the main producers can be found. 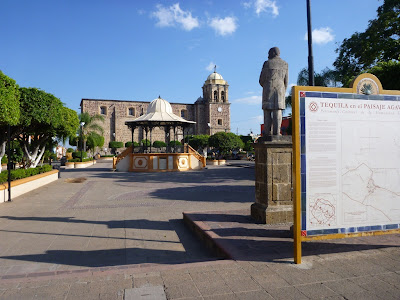 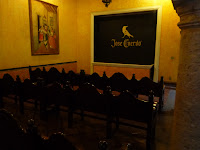 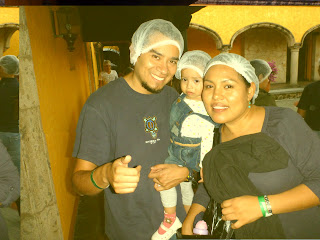 AND THEN, the event I had been waiting for since the first time I was in Mexico 13 years before, but was unable to see because it wasn't the season... 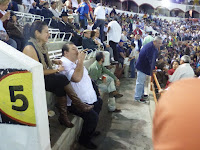 Oh what a day, vendors selling all sorts out side the stadium, a high class crowd, with some pretty girls and some fat cats.  $16 gets you a ticket on the shaded side of the stadium on a sunny Sunday afternoon.  Three featured Matadors and 6 main fights was a great equation for entertainment.  Awesome!
I always assumed the fighter was too good for the bull and never got touched, but...


This bullfighter has what it takes.  Very entertaining!


The kill.  With the sword already in the bull the fighter commands the bull to go to sleep.  Bullfighting may seem cruel to some, but a better way to go than a slaughter house don't you think?

A few days left in Guadalajara and my tire was still leaking so I went over to Moto-Chavane to get repairs and hopefully other things for the bike, etc.  Ended up with a Valve check, a fixed tire and tools I will likely not use.  Got to help out with the Valve check which was great.  "Help out" is the wrong word as I took over the valve check when my mechanic went for lunch and didn't come back!  His kid cut herself so it looked like he wouldn't return.  I convinced Chavane that I could finish the job as taking a 1 hr $50 plus cab ride was not an option.

With shop help from the others in the shop I got stuck in.  Cristobal returned to help with the rest of the work and the whole team got in to the beers as we wrapped up.

A Mexican Wedding (La Boda de Mexicano).  What can I say, I was thinking of leaving when Alex said, "hey man, you got to come to a Mexican Wedding".  Enough said, so I stayed.  Alex and Marilu's wedding, Congratulations and all the best in the future.  BTW this Mexican wedding was very similar to a Canadian wedding except it costs 1/10 the price for the exact same level of service (Ie: $3000 USD to serve 300 people dinner and drinks all night. 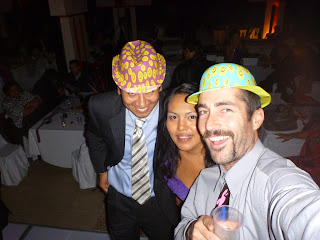 Last night around Guadalajara before I hit the road Southeast.  We took a drive out to Lake Chapala and I'm glad we did.  Great spot full of life, street shops and restaurants.  Unfortunately the lake is highly toxic according to unfounded sources and is also Guadalajara's drinking water source.  Still nice photos though.


Crossing Help.  Love how the guy speeds up.