Early morning and a rough subway ride (hard braking and bumpy), but I made my flight after slipping away from the hotel around 4:45 AM.  Subway and Sky train = $7.25 vs taxi = $60.  On the plane I shared some tickets and vouchers with the flight attendants which got me some new friends and a couple of cookies.

Hit the ground running after Dorit was kind enough to pick me up from LAX.  Final pieces added to the bike installing a Madstad bracket for the windshield to help with the well known wind buffeting problem common to V Stroms and a SW Motech Center stand which should be standard issue on a touring bike, but yet Suzuki still leaves this off even the 2012 models.  Both parts were ordered from www.twistedthrottle.com which has a tonne of bolt on upgrades for most bikes.  Thank god I went to Dorit and Gaz's local mechanic to use some tools at "A Step Above" while trying to install the parts.  Instead of 5 hours and pulling multiple pieces off including the muffler it was done in under 2 hours with help from the shop guys, happy Brad. 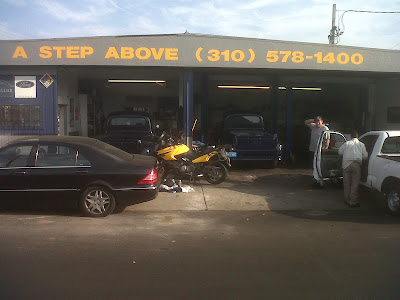 Thanks Mike, Steven and the other shop guys!

Picked up spare parts from Honda of Hollywood (Clutch cable, tail light, fuel pump strainer, etc) using my trusty GPS (Garmin 550 with only Canada and US maps loaded) and then got out of Tinsel Town.  All Interstate today (Hwy 10) for about 6.5 hours with few breaks, ouch.  Mostly straight, but cool views in the desert, which I find fascinating being so foreign to me.  Let's not forget about the Wind Mills!

Stopped on the side of busy Hwy 10 to get this photo and the wind almost blew me off the bike.  I guess that's why they have Wind Mills there.  I was surprised with all the people in prison you think the garbage that litters Hwy 10 coming out of LA would be no existent (not show in photo, but there was a tonne of it)? 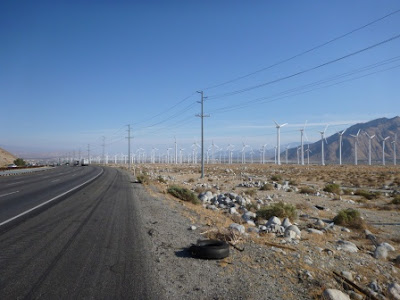 First of many Sunsets on the trip. 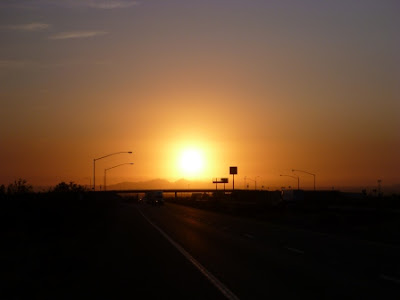 Made Maricopa just South of Phoenix around 7pm where Dave one of the 2 Canadians I met in Cambria that I will ride into Mexico with set Greg and I up in Harrah's AK Chin.  Apparently he's a bit of a gambler as he got the rooms on his player points with the casino.  This worked out well since we all needed to do a couple more tweaks, catch up on emails and everything else over our two day stay.  Thanks for the room Dave.

The hotels will diminish as we go, so why not start high!

Leaving Harrah's around 9:30am I decided to start using my stamp and leaving my mark.  Do to the late start and Dave going through vaccination shot flu like symptoms the border crossing was likely out. 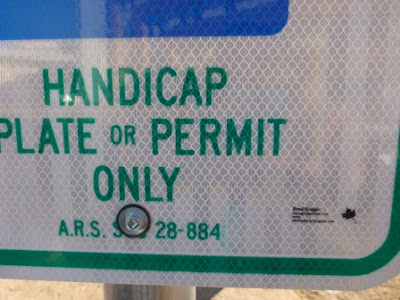 Hwy 10 and 19 were standard (C2,R7,T2/3,V5/6).  Wish I got a shot of those huge Arizona Cacti, but I thought I would see the same in Mexico (guess not, different types in Mexico).  Also as you get with in 40 km on the Mexican border the road signs change to km which I thought was cool even though that pretty dumb considering the speed was still in miles/hour, wtf?

Arriving at Nogales around 2:30pm we decided to hold up here.  Greg exercised one of his complementary hotel vouchers and it was $10 for the night for the cot, that's it.  Thanks Greg (Hannibal).

Shot of all our stuff on the hotel trolley. 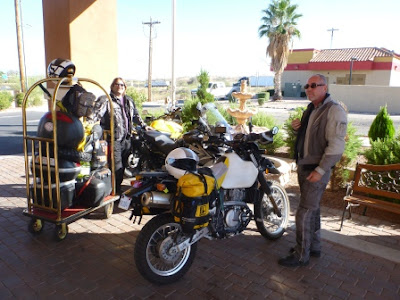 The next morning as we packed up a news reporter and cameraman working for Belo Border Bureau asked to interview us with regards to the danger of travelling through Mexico.  Just what we needed to put our minds at ease, haha.

TAKE IT EASY!  No lines as everyone is scared to go to Mexico!  Went into the border and through the "RED" light "GREEN" light system famous in Mexico.  Basically every 5th person gets the RED and inspected.  That was me this time, but it was too easy and took all of 3 minutes.

After that we parked the bikes together and checked ourselves in to Mexico!  It took about 15 minutes and cost $22 USD for the 6 month Visa (one office to fill in Visa card, then around the corner to the bank to pay, then back to the Visa office, done), which did not include the bike permit.  OH?

Nogales, Mexico side of the border.  A little different than the US side with a little more ciaos. 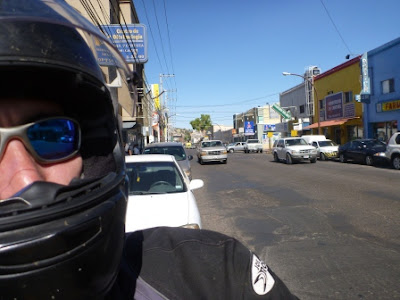 So, where do we get our bike permit???  How about Kilometer Twenty One is what we were told.  After 21 km you find this place where you get your Permiso.  $444 USD with a refund upon leaving Mexico of $400 if you can find the office at the South end (apparently 57 km before the Guatemala border, worry about that later).  Not only was it expensive, but we had purchased insurance ($90) the night before to cover us in Mexico and show the Permiso Office which they didn't care about at all!  All you need is the Visa doc from the border, Passport, Bike Registration and Canadian Insurance.  They don't even want to see your drivers license!  You will need one copy of each (both sides) and that's it.  Well that's it after about 1 hour.

Cool America dude driving down to the West Coast for some SCUBA action.  He drives his bikes around Mexico all the time with no problems, and HE'S AMERICAN (Gringo). 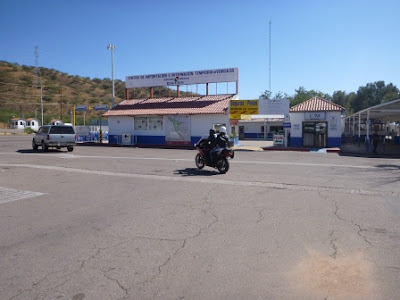 
Unfortunately for Trucks going in to the US the line is a little longer. 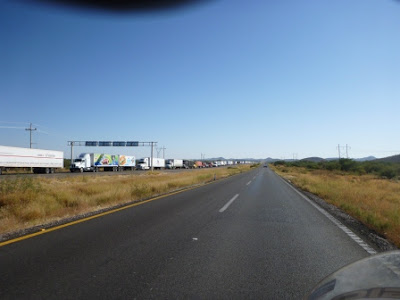 On the way to Hermosillo we stopped for gas and such.  Our first Mexican contact.  $3pesos ($.25) for the use of the toilet, I didn't pay, but went anyway.  Not sure what the price of gas was per liter, but I didn't pay any more than in the US or not by much.  We could tell it was special gas being pink in colour.  Oh those Mexicans and their festive colours. 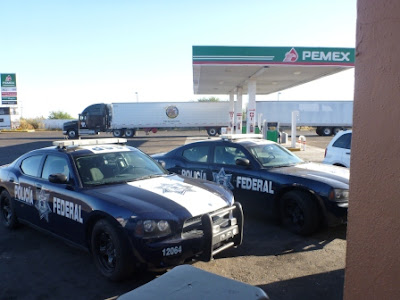 As the sunset we panicked a little and grabbed the nearest hotel after passing a "Zona de Hotel" not knowing  where the next would be.  $100 USD for the 3 of us for 2 rooms which was expense considering the road in front of the hotel was completely chewed up with construction.  In my experience with travel it takes time to get in the groove and figure things out, so I'm expecting to figure it out a little better as we dig in to Mexico more and more.

Oh, last thoughts; 100 pesos deposit on the remote control for the TV, the server at our road side eatery ran two blocks to get us beer charging us the exact price he paid at the shop ($4.50 for dinner) and St. Louis won the World Series that night.