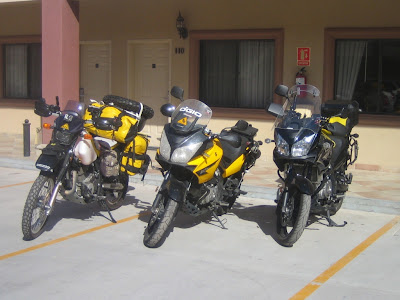 On the road and out of Hermosillo easily enough.  Hwy 16 is just great.  Hermosillo to Tecoripa (C3R6/7T1/2V4/5).  I guess I was expecting Mexican roads to be rough, but this one was not.  Saw my first desert Vultures ripping up road kill, but couldn't get a photo (I'm sure some of you are happy).

I feel cool, but it just doesn't look that way in this photo. 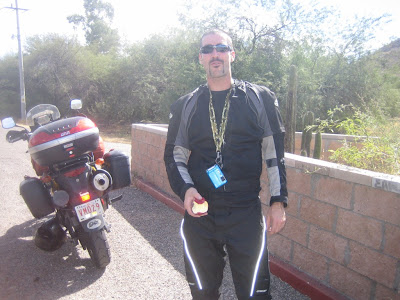 After Tecoripa it got gooooood...  The day was only 300km and this section helped me understand why it took 5 hours or more for the day.  Curva Peligrosa (Dangerous Curves) everywhere and just wonderful mountain riding.  Aside from no road shoulder and a few wondering trucks I can't say enough.  It would have been great to stop for more photos, but there just isn`t enough day for that.  (C8/9R7T1/2V8). 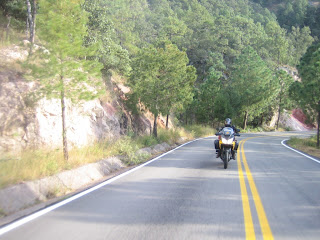 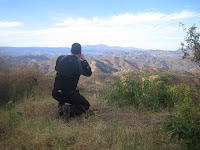 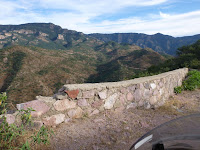 Video by Greg of road to Yecora and a Military Check Point (they do not allow pictures!).  I was ahead of the guys and had to deal with the Military on my own in Spanish.  I learned later from Dave that they were looking for guns and drugs and if I worked in Mexico.

In to Yecora with 1 hour or so before night fall.  On the way in to this town (population 1000) we passed a wasted cowboy on a horse.  Toured the town for a hotel, but ended up at the hwy gas station for advice.  Some King Hotel was the best and allowed us to PARK in our rooms! 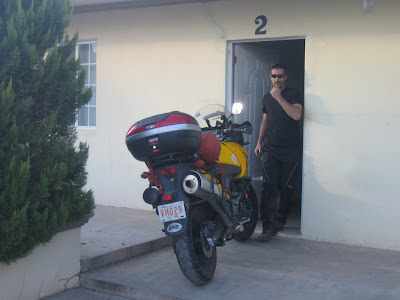 
After parking we shot over to a near by restaurant to grab food from pretty Monica a 20 year old single mom of 2 who was a bit shy at first.  It was decided to get back to the room to eat since the Military check point had mentioned to Dave that Yecora wasn't the best town.  Not sure if the town was that bad, but after a taste of a local shop owner's home made version of wine/moonshine we locked ourselves up instead of joining their bonfire next to the store.  Safe choice as it was still early in the trip. 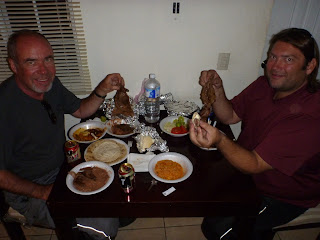 Many of these "Capilla" worshipping stops along the way. 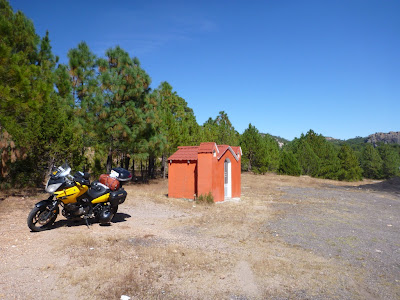 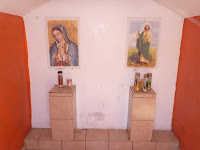 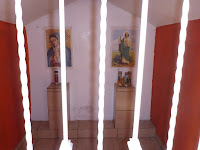 Hwy 25 into Creel was great.  Big straight to get in to a canyon road with great sweeps.  Unfortunately the sun was at eye level on some of the corners, but still great.  (C6R7T2/3V6/7).

My new buddy, Miguel, from San Juanito while Dave made a SD card change.  We told stories of our lives, hopes and dreams.  Maybe he'll remember this day as the day he meet the spacemen riding rockets through his town. 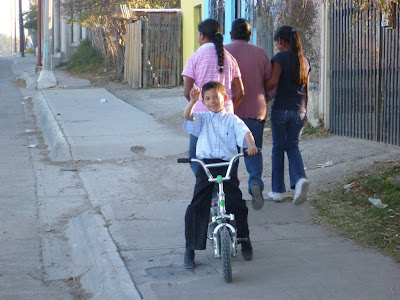 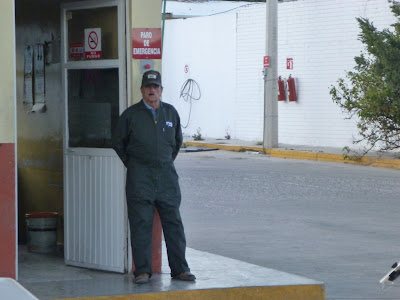 Ok.  The real welcome to Creel, a touristy type town at the North end of Copper Canyon.  We arrived the night of the Festival honouring Saint Creel (who actually doesn't exist, so it's truly honouring the nameless saint that watches over Creel).  All day festivities making it a challenge to get to our hotel, so I parked at the church nearby with permission.

Our Hotel Margarita (remember there are two, the one with the restaurant is the expensive one).  Just in case people are wondering why I have a sore head. 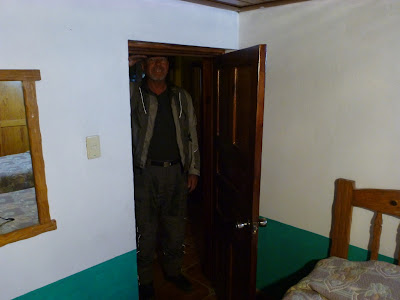 $40 between the three of us for a room, dinner and breakfast. 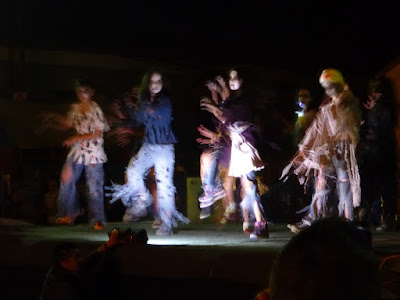 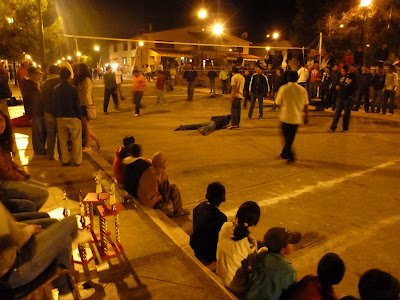 Check the end of the video as this player sacrifices it all.  He was clutching his arm a lot after this.

I was surprised how cold it was that night, but I guess to be expected at 2000m elevation.  Bolivia will be cold at 4500m.

Left the other two behind today as I needed to get down to Puerto Vallarta and Guadalajara to see my good friend Alex and his family.  See you guys in the Southern Hemi.

Well, I know I keep saying it, but the roads are all a guy who likes pavement and curves needs.  More sweeps than hairpins which puts a smile on my face.  Plus lots of landscape changes as the elevations went up and down over the 200km in the Canyon Area.  (C8/9R6/7T1V8).  Saw riders going the other way, but no one stopped to chat.  I had no traffic in front of me at all, may be 1 car in 3 hours, maybe...

I did have my first outdoor bathroom experience not for urgency, but for comfort and experience.  It was grand and peaceful on top of the Canyon.

You don't have to worry about stopping on the road as there was no one else around. 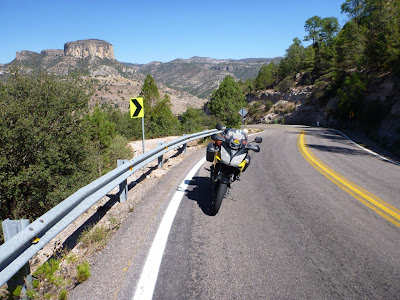 Leaving a second mark on the Canyon.

And then there was my crazy move of the Month.  Well for me anyway.  Riding by a look out tower I thought to myself, what a spot to look out over some of the Canyon (top right corner of photo). 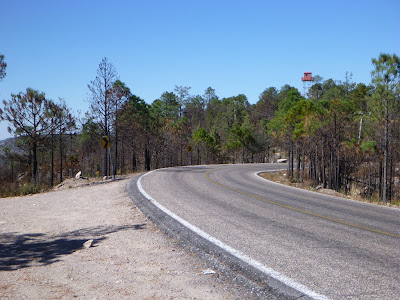 A couple butt clinching shots as I remember my fear of heights...See the videos for the sounds of fear. 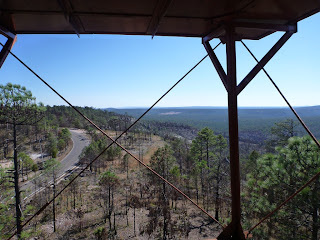 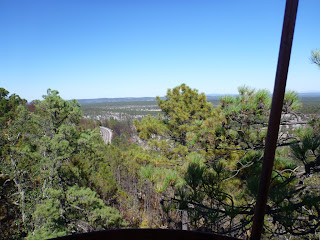 Three videos.  1) Good idea to climb to the top of the Tower, 2) Up top and realizing how unstable the tower is and how much wind is at the top, 3) Happy to be on the ground!

After the tower climb the the rest of the day was more relaxed.  Still great riding opening in to more sweeping desert and rolling hills. 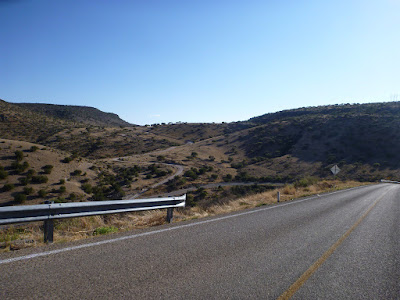 I pushed on passed a small town with one hotel opting to go for Parral and more selection.  At a gas station I struggled to get my point across for directions to the Zona de Hotel (actually La Zona Hotelera) and was lead by a local in his roughed up 2 seater Datsun to an Auto Hotel.  Looked expensive and it was compared to the last couple of nights.  $20 for 6 hours?

Auto Hotels are all over Mexico and commonly called Motels, which is where couples go for extra marital affairs.  Apparently this is common.  The hotels are beautiful with King size beds, huge bathrooms, cable TV with Dirty channels and a private automatic garage to hide your car so no one knows you are there.  Some of them can be quite dirty, but this one was immaculate!  So for a check in of 6pm and check out at 12 or 1pm the next day I gladly paid $32.

Tour of an Auto Hotel room


Miguel and Lourdes feeding and entertaining me at the hotel.   Miguel took me around the town that night and the next morning.  Cheers dude! 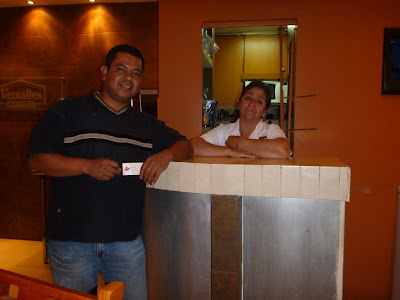 Most parts of Mexico struggle with blocked sewage so it's best not to put the TP in the toilet.  I think it's time to introduce Mexico to the Bum Guns of Thailand! 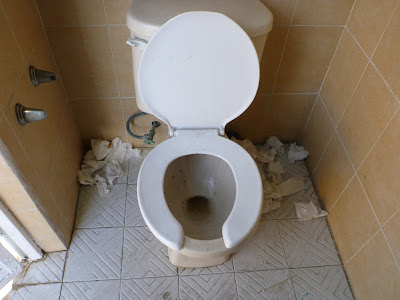 One of many Taco stands I have enjoyed in Mexico. 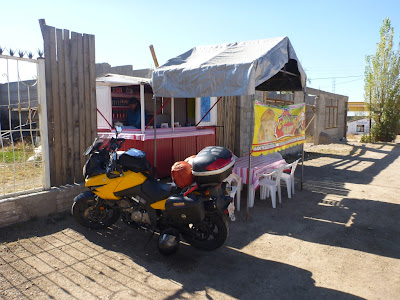