Awoke from a chilly night, had a crap breakfast which was included and got out of Comayagua after a 5 minute tour.  Some construction first then we were welcomed by 50km of beautiful pavement!  C8R8T2/3V8, Climbing up and down the mountains to Tegucigalpa, Honduras which was the easiest big city to get through so far was a joy.  The road as we closed on the Border was good too, C7R7/8T3V7 through farming country side and foothills.

Reminded me of Canada on the way to Tegucigalpa, C8R8T2/3V8 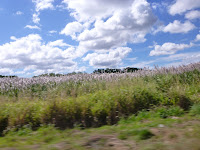 At the Border we obtained the services of a Helper named Porqui (Porky) who guides you through the numerous counters and papers to fill.  At one point a tough dude from Nicaragua wanted to take over from Porqui meaning we would have to pay two helpers, but I told him to get lost in a nice way (he was a amateur boxer).  Porqui earned his $2 that day and we were in Nicaragua and on to the best roads in Central America.

See stats page for Costs of crossing the border, etc.http://thelifeofbrad.blogspot.com/p/tlob-to-argentina-stats-page.html

Happy to know we were on the best roads in Central America for the rest of our 150km to Leon we dug in and ripped it up.  First section from the border was very nice in a canyon.  C8R8T2V7.  PanAm Estelli to San Isidro C7R8T3V7.  Took a lunch stop at Comedor Blanquitas which was very inexpensive and good.  Nice service too. 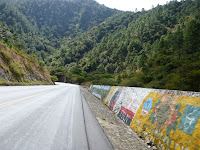 Portion of the PanAm Hwy before the turn West to Leon.

Entering Leon after my GPS took us down a couple of turn around roads I wasn't super impressed.  Didn't look like much, but once we got settled at El Hostel Albergue we found tasty Sushi and I found some live music at Olla Quemada and good fun with American travellers (Props to Bigota Ryan a forest fire fighter out of Idaho).  Leon is pretty good in my opinion and Nicaragua even though it doesn't seem safe, is considered the safest of Central America.  We even left the bikes on the street for the night.

A quick tour of the Cathedral which is the biggest in Central America.  Unfortunately we didn't go the 20km out to the Pacific (Beach time later in Nic).  Coordinates in and it was off to Granada stopping on Lake Managua for lunch, but not before a couple police check points.  One successfully avoided and one not successfully avoided.

Wire braclet making.  The guys hands were rough, but he was making $25 a bracelet so worth it for him.

Most of the day was good except for the annoying bit through the Capital Managua which took the majority of our short day.  In to Granada around 4pm on Lake Nicaragua where you will find a big tourist vibe with a main strip of restaurants and bars well developed. The rest of it is a bit rougher where you could get mugged,but no dramas aside from driving around with a freshly released convict who was helping us find a hostel.  We found this out later and hopefully have learned from our mistakes.  So many people see gringos as money, which is sad, but true. 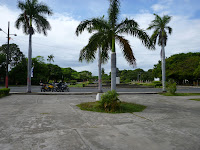 Sad Side Story: Gringos = money was emphasized when the local hotel owner we met early came by with her friend offering us a beer, which was the second time a local did this on my whole trip so far(didn't we learn from Vincent on Roatan?).  It was all good and we bought the second round of course.  I left David with them and went to meet our new riding buddy Guillaume for dinner.  Apparently in the end the girls didn't pay for another drink, but David and also asked him for more money to pay for their dinner they were going to have later.  Shame on you Valeria (owner of Hotel Valeria).  David told them to get lost.

Out of Granada around 11am with a short ride to San Juan we took our time stopping in San Jorge to check the ferry to Ometepe which was to be a one night trip some time during the week when the clouds had lifted.  Granada to San Jorge C2/3R7T2/3V6/7.


In to San Juan del Sur around 3pm after a good relaxing ride day.  Took a look around for a spot and met a french girl named Silvie who directed us to the Cruise Inn which is a motorbike friendly stop and only 4 min walk to the main bar area.  Although no one goes in to the water or stays on the beach in San Juan it's got a good vibe and great restaurants.  Plus a great beach only 20 minutes away by bike.  Check out the Black Whale for a beer and some foosball, oh and heavy drinking with Aussies if you get there.  Damn, let's just say I had a couple hard nights including hanging with an AFLer from Adelaide and his wife (Clinton and Heidi) who introduced me to ball punching on the pool table (don't ask).

Side note: Dutch Jonny is the MAN!  Had a great afternoon hanging out with one of the local poker players from the Cruise Inn.  This 70 year old Dutch guy had seen a lot and I could have listen to his stories for weeks.  I do find it quite sad and difficult about travel, that you never really know when to pick your spot, but 6 days in San Juan was a good choice.

Go to Henry's for a seafood soup, El Timon for 3 medium lobster tails for $12, and Maggies for anything chicken (it's called Pollo something?).  Big spend and absolutely amazing go to El Colibri! ($30 per person with lots of wine, starters and main).

One night out to Ometepe Island which was really good.  Definitely rustic with a cool new road that covers half the island (brick laying technology I saw in Europe a couple years back, see photos).  Thoughts of swimming in the fresh water waves were dashed when I saw the garbage floating near our water front hostel "Bueno Vista".  Boat and bike across to the island was only $7 so much better than Roatan, but of course a different style ferry going a heck of a lot slower.  Ometepe is must if you have time.