Leaving behind the busy street markets of Chiquimula we rode the 50 km to the Honduran Border 10 km from the town of Copan famous for it's Mayan Ruins.  But first the border.  Easy enough out of Guatemala, but Honduras had a bit more running around.  We made the mistake of having very little local currency and only $100 US bills which the payment offices don't always take.  Eventually after being at the border for 3 hours including waiting through the border groups lunch break we put it all together.  In Conclusion you could do this border in 1hr if you have your shit together and there are no lines.  Comments on Stats page...http://thelifeofbrad.blogspot.com/p/tlob-to-argentina-stats-page.html


Lunch at the Honduran border, disappointment


Copan is a great little spot, but the cobble stone can be tough on the bike.  Good spots to eat for cheap and we managed to get our own rooms for $11ea with toilet, fan and TV at Yaragua Hotel.  David found out about it through a minister guy, Jose, at the border who was changing title on a car.  Jose was a great guy to know and even took me to the doctor when my stomach went bad the following day.

First night in town we had happy hour beers at Via Via Cafe and then over to Lester's for steaks and good fun practising Spanish with the staff.  Bit of a slow night.

Copan Ruins.  Mayan Civilization that had 16 rulers over approximately 400 years falling after poor crop return and fleeting resources over the last years in the 8th century.  Definitely DO the above ground Ruins ($15) splitting a guide with 3 or 4 people (Total $25), but DO NOT go through the tunnels for $15 + $10 for a guide.


Scenic video of the Copan Ruinas

And then there was stomach sickness, oh crap.  After a pasta dinner and a bunch of rum with a Kiwi dude Adrian my stomach finally said good bye after 60 good days.  Late night chills and bathroom trips reminded me of other days of food poisoning. Even though I had an antibiotic for this I wasn't sure if I should use it since the SIDE EFFECTS included diarrhoea, nausea, weird?  So, I waited out the night and called off leaving tomorrow in the morning.  With the help of Jose I made it to an English speaking doctor for $20.  The doctor confirmed I had no Malaria or other commons and told me to take my Cipro (anit-diarrhoea) for 5 days to sort it out.  Perfect timing with my birthday coming the next day.

Cipro paid off and I was good enough to travel to Roatan which included all day rain and a 1.5 hour boat trip on a high speed cat where most people yak.  Happy Birthday.  And a Flat Tyre too!

Out of Copan with light rain.

We took the by pass around San Pedro Sula which is rated one of the worst cities in the world for murders.  Of course we were never planning to stay there.  From Nueva Arcadia through San Pedro to La Ceiba was good for views, but not much for curves.  C3R6T3V7.


We made La Ceiba around 3:30pm rushed as the boat was leaving at 4:30pm.  We had no time to figure out the best way to get to Roatan with our bikes which meant it was going to cost us!  $75 US one way for the bike and $20 per person.  I guess it was ok, well not really, and to top it off they didn't even put the bikes inside leaving them exposed to sea spray.  We found out later we could have shipped them in a container for $10, but not a safe choice.  In the end it would have paid off on the island if we had some days of Sun to ride around. Damn :o(

On to the passenger ferry with the bike.


Bike on boat cruising along (not show: loads of people getting sick)

Roatan is a very expensive spot compared to most of Central America.  For 1 week vacation it's still pretty cheap ($80 to 100 / day including some diving).  I was surprised to hear Caribbean English accents similar to Cajun USA.  Roatan definitely has a danger feel to it, but we had no problems at all.  Aside from the rain and the major road works going on it was a really good break (the rain days were a good excuse to stay in and chill out).

A couple of dives in Flowers Bay = Key Hole and Pirate Cove.  Thanks Bernd for the photos.

Sad Side Story:  DON'T ASSOCIATE WITH COCONUT TREE!  Owned by Vincent this hotel, restaurant, dive shop and super market only appears in Lonely Planet for its super market.  Why?  The owner couldn't tell me why.  We arrived late and figured to stay at Coconut Tree as they were supposed to have a good dive shop.  The owner Vincent befriended us immediately buying us a beer in his super market.  He suggested the best place to drink them was in his bar upstairs.  A couple more rounds of beer and platters of food we thought were on him for my birthday wasn't the case when David got the bill, which had all our beers, the food and the owners drinks.  Sneaky Prick!  In addition you get $10 off your room the days you dive with them for $35/dive which is $10 more per dive in comparison to the group I found the next morning (Native Sons = in Lonely Planet).  So it doesn't take long to save at $10 per dive in comparison.  I also found a great Hotel Posada Arco Iris we moved over to the very next morning for $60.

"Lovely weather we're having, isn't it"


Posada Arco Iris is a definite recommendation in Roatan.

Left early to grab the passenger ferry back over to La Ceiba and start what we thought could be a long day.  As we said goodbye to Roatan the Sun came out.  Looks like I need to correct my karma and fast as we went from rain on the island leaving sun behind in to rain on the mainland.  Come on, really...

Back to La Ceiba, paid our $6 per bike import tax (which you pay on the way to Roatan too).  In to the rain off and on up to El Progresso. C5R7T3/4V7.  The tyre plug from days before didn't hold after 100 km or so.  It was back to the drawing board starting with another BMW plug, which also failed as the hole was not round enough.  In the end it was time for the sticky plug, which David also had and installed like a pro. 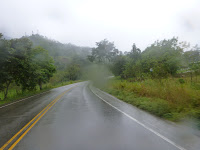 After the tyre drama and a missing bridge we made it to a nice lunch stop on Lago de Yojoa.  El Progresso to Comayagua C5/6R8T3V8.  Lake and nice curves by the water then up the mountains and over to Comayagua.  No real comments on Comayagua other then you don't need to go there.  I did try Tajaditos in the Centre Square (Fried banana chips with ground beef.  When warm this would be great).  Went to sleep with an armed guard outside the hotel and that was Comayagua.  Oh, Hotel America is not great or cheap and only has Eggs and beans on the menu for dinner (worst meal of trip)!