Said goodbye to the Campos family and I was on my way South again.  Thank you for everything.  Nice to have such good people in my life. 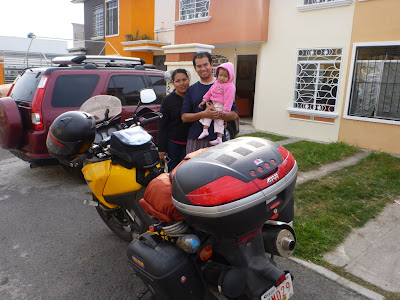 Only 20 km into the trip and I realized this at 100km/h and the case stayed on.  Wow, Givi is great!  It was just all my clothes in that case, so not major.  After the safety strap was added to the luggage I continued on.  The road passed Chapala was boring especially because I saw little of the lake at all..  Only C2R6T6V3. 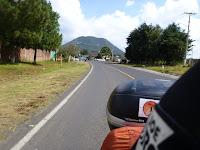 Although, paranoid about Michoacan State and possible drug lord controlled towns I went anyway.  Sure enough Cheran did not disappoint as I came around a corner in to a built up post with sand bags and two traffic control arms just before the town.  A younger guy with a black bandana over his face asked me something I didn't understand.  I wasn't scared, but made sure he understood..."Tourista!"  Ok... no problem and the arms went up.  I only wish I could have taken a photo. The photo to the right is the last piece of the barricades on the way out of what I thought was a very normal looking town.  Quite a war zone look with staggered blockades which included a burnt up car and what not.  Phew!

Urupan to Nueva Italia, Outstading!  Yet I don't know why I don't have any photos.  C8R6T3/4V7.  Riding above a canyon as you come back down to sea level and humidity.  Much different from the 1500m that Guadalajara sits at.

Photos below capture some of the views around the Rio Grande in Michoacan.  Ruta 37 to Ruta 200 and the coast.  The views here were very good, but the Tolls were not.  Someone told me if you went from the US to the end of Mexico you would spend $250 in Tolls.  That's shit and I believe them now! 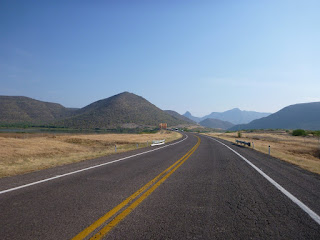 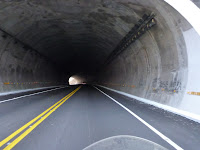 
Zihua (as know by the locals) probably has more to offer, but I was really only looking for a place to stay where I could go diving and sit on the beach going for a swim every couple hours to relieve the humidity.  Not the case.  I'm not even sure there is an open Dive shop at the moment.  Plus a boat filled beach front and higher prices which put me over the bridge on the less safe North side.  Oh well.  In the end I slept in a fantastic bed (best in Mexico), ate well, gambled some money away and had too many beers.  Oh, and dropped the bike for the 1st time on the trip (Don't ask).  Not too shabby for one days work.

Recommended by absolutely no one I just had to stop in Acapulco.  Well, actually what I expected to be a 7 hour drive from Zihua to Pto Escondido was said to be 12 hours so I thought I better stop in Acapulco for a night to break it up.  Actually a pretty eventful stop.

Ruta 200 Zihua section that parallels the ocean at points, goes through jungle and mountains. C6R6/7T3V9.

In to Acapulco with about 1 hour before night to find the famous "Los Flamingos" once owned by John "The Duke" Wayne.  Tough to find if your GPS is retarded.


After the locals of that back alley sorted me out I finally found my way to Los Flamingos and battled the price from $50 to 32 which the bell hop was very impressed with when I told him.  Adolfo who owned or managed looked tough, but he was pretty nice in the end and had his photo with all the stars from the past and present.  Although no renovations have been down since the Duke owned it, Los Flamingos is a good place to get your nostalgia fix. 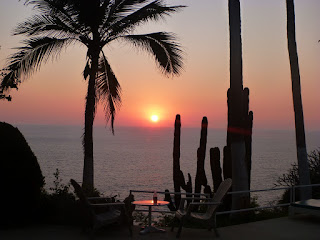 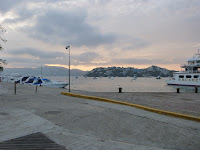 Since I was up so early I had to find something else to eat besides Tacos.  No lunch at 10:30am, so I stopped in at Danilio's store for a banana and what not.  I was about to buy a big yellow banana when Danilio stopped me and gave me a very browned, over ripe banana for free (I bought 2 instead).  Thank god as these big bananas (I think Muchuchos) are very bitter if you don't eat the over ripe ones.  Nothing worse then a bitter banana!  Also picked up what I thought was a cookie, Dulce de Tamarindo.  But not really.  It's like the end of a slurpee with out the cold.  Too sweet, but you can stop eating it! 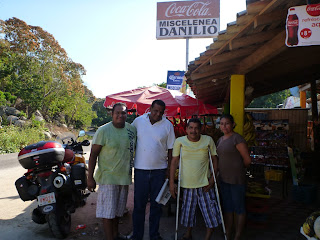 Puerto Escondido.  They say if you stay longer than 3 days you never leave.  Staying at Hotel Ines which was $32 a night I felt two days was enough.  Thinking of leaving in the morning I left the bar before my second drink, came back to my room and convinced myself to go back out.  When are you going to be staying right by the beach and bar at the same time.  Hopefully always...

It was good that I returned to the bar as I met some Germans which you know are my favourite.  In addition to meeting the Germans and hanging with them for a couple more days on the 4th day I woke to a bunch of other moto riders at my hotel.  Happy Brad.  So after being quite solo for weeks through Mexico (except for Guad of course) I now had a group of friends to hang with = 5 days in PTO Escondido.  The town is good and everything is along the beach or you can go to town for more local food and community.  I found it funny that most of the meals I had were not very good and the surf is heavy and crashing so swimming isn't great either.  Yet people love it here and so did I.  These were the first days of my whole trip where I can say I really relaxed... 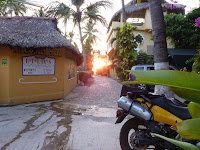 Tequilaphistication (Copyright Nov 2011 of the word)

This is awesome man, keep posting, have fun and take care.

If I remember correctly, today is your birthday! Happy birthday ! Trip looks amazing !