Got my camera going again so back in the world of video and photography.  Off to the not so travelled border Sixaola in the Northeast corner of Panama that has a tough to navigate bridge well known to motorbikers.

It was a slow border crossing, not because it was that busy, but more the fact that they only have one person working each check in and out station so a border that normally sees 20 people per day and few trucks can get quite jammed up when there are 40 people crossing at the same time.  About an 1.5hrs on the Costa side and then another 2 hrs on the Panama side.  The bridge was super cool with a few tough spots where boards were missing, but manageable.  Only crap thing was these kids who surrounded me at the bikes trying to get money off me and trying to get me to go for a cool swim in the river about 300m from the bikes.  One kid would try for 10 minutes and then another would replace him.  No way you could leave the bikes with these vultures around.  BTW, thanks for doing the paperwork Guy.

Check out the stats page for more on the crossing http://thelifeofbrad.blogspot.com/p/tlob-to-argentina-stats-page.html

Leaving the border we were lost for a bit and then after many requests for directions we finally got on the only road to Almirante.  The hwy portion was fantastic C7R7T2V7/8.  Arriving in Almirante we all thought "I hope the islands are nicer".  Rough looking spot and we didn't love that we had to leave our bikes there then boat to the main Island Colon where Bocas del Toro is.  I sent my GPS Spot location and forgot it on the mirror of my bike in the parking place.  Worse case it would be gone and not such a bad case it would be there with dead batteries.

In Panama's Party Central Bocas del Toro.  A video below of Fireworks in the street.  One night in Bocas was good for us.  At the bar we met the niece of Manuel Noriega who looks normal, but was definitely on the wild side. 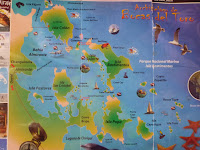 The next day we decided to go to the more relaxed island Bastimentes / Red Frog Beach which meant we had to move all our shit.  But first I took a little tour of Bocas del Toro.


Our very industrial Bocas Bound Hostel on Bastimentes which people raved about, but I found to be soulless and hammockless (well, one lopsided one, which is not enough for a big hostel).  Air conditioning you can't control meaning it was about 15C in our dorm at night, back breaking beds and the expectation we were right on the beach were the big negatives to this apparent paradise.  Where were the little beach huts I had in mind?

Two rough boat rides back to Almirante which Guy definitely didn't enjoy with his sea sickness issues.  We picked up the bikes in the rain from our $2/day parking spot near the water taxi office.  I was happily surprised to see my Spot(GPS) still attached to my mirror and blinking away, Holy crap!  David, Guy and myself suited up in our rain gear and mounted our steel horses for a long day of riding.  A midday start couldn't be helped due to the 2 boats required to get back to Almirante.  The day was going to be long for sure, but really good riding was expected as we were going to pass over the mountains from the East Coast of Panama to the West Coast.

It truly was an amazing day of riding with a bonus handshake from a Canadian Member of Parliament.  What are the odds of that?

Our first 65km was outstanding with jungle, ocean views, sweeping curves in the mountains and small undeveloped villages which started in the rain and opened to the sun 30 minutes in to the ride.  Great!  C7R6T2V8/9.

Side story: A quick lunch stop at a Bus Terminal which looked dodgy, but was quite delicious found us chatting with some guy from Nova Scotia.  He turned out to be Mark Eyking the MP for Sydney/Cape Breton and a really friendly guy.  He had returned to Panama on vacation to see developments he had been a part of 12 years before.  We shook hands and he parted letting us know if we needed any passport help to give him a ring.  I will likely be calling you Mark, haha (that's not funny). http://markeyking.liberal.ca/


Up and up to the clouds and a bit more rain was next on the days Menu.  C7/8R5T2V8, very few cars on this road and I would say this pass as one of my great rides of the trip, RECOMMENDED.  Actually the only section of the day that was disappointing was the Pan American section after the city of David where about 50 km was quite shocking to say the least. Before choppy C2R6T3V5 and the choppy 50km C3R3T4V6.  Gorgeous section of road from PanAm to Sona = C7R7T2V7. 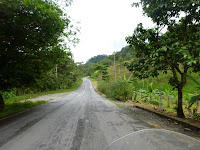 Video of the dam along the mountain pass

Down from the mountain pass on the way to the PanAm

As night was approaching we had 70km from Sona to Santa Catalina which an America girl had told me was brilliant and freshly paved only days ago.  Sounded great so we rode in to the night to a nasty surprise that only 15km was paved and 30km had rough patches of gravel that were hard to see in the dwindling light.  Sorry Guy for getting tight with you, but I would rather go a bit quicker with the fading dusk light then hit this shit in total darkness.

Not so paved road to Santa Catalina 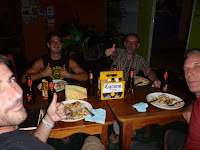 Ran in to Conor (from San Cristobal, Mex) and had dinner at the Dive Stop bar where we parked our bikes, bought $1 beers and eat nice burritos ($9 with 3 beers).  The hotel Brisa Mar above the bar was ok. The quietest toilet of my trip! which was actually a bad thing because I could hear what I thought were rats running around in the roof all to well.  I really thought one of what ever it was was going to fall through the drop ceiling and on to my head over my 2 day stay.
What's in Santa Catalina.  Well, not much with only a few shops and restaurants the place was not as developed as I expected considering having a major national park on its door step where people pay too much to dive with Whale Sharks ($20 each to enter the marine park, $120 for 2 dives with out lunch which is double of any place on my trip. NOT recommended.  Spend $40 and go snorkelling as you still get to see Coiba Island, etc.).  However I did learn a new technique for releasing head pressure while underwater, thanks Luca.  What didn't happen is that I missed the damn Whale Shark by 2 minutes as I went low on air just before the others saw the big fish.  Still in the end it was great to see Coiba Island which you should stay on if you have the time as there are many things to see and hike to (including a resident crocodile very close to the accommodations).


Hoping to see a Whale Shark

Sad side story: For the lunch I needed to pack I went to the depressing corner store which was grim.  They had one bag of rolls covered in maggots or some kind of insect so that was out leaving me with a cup of noodles, a can of ham, a can of tuna and a snickers bar.  A very depressing shop indeed.  I managed to get 6 slices of bread for $1 at a cafe next to the dive shop.

Don't get me wrong, Santa Catalina is a good spot to go and I recommend staying towards El Estero Beach.

Woke around 8am to get a quick swim at Playa El Estero which was great, but short as I left the bike taking up too much parking and figured I should get back to move it.  My silly North American attitude still ingrained in me.  People will just park around you so don't worry Brad.


On to Panama city in the light of day so I had a good chance to take in the road from Santa Catalina to Sona C5R6T2V7 first part, rough section C5R4T2V7 and new pavement C5R8T2V7.   Then finally PanAm all the way into Panama City with a great double lane mountain pass finish C4R8T3/4V6.

That's how to cut a coconut!

Entering Panama City I went through an area of high poverty which is situated right next to Casco Viejo the sexy old town area.  Unfortunately we couldn't get in to the highly talked about Luna's Castle and with little options in the area we drove off to Bella Vista close to the Center of town where you can get a double bed with parking, Wifi and A/C for $25.  The Wifi at Backpacker Inn didn't work in the room so we moved to Hotel Cuba which was extremely lucky for Guy and I as our mate Dan who didn't move with us had his bike broken into the next night in the so called secure parking.  So, Backpacker Inn is SHIT! and Hotel Cuba with a crap reception area is actually really good for $15 each in a double room, very secure indoor parking and Wifi.  They place is so secure sometimes you can't even get yourself out.

Good video of bridge view of Panama water ways to the Canal.

Over our three days in Panama we hit a bar on a Saturday night which was great, went to the Panama Canal ($8 for full access, go with limited for $3 as you only need to see the ships go through) and spent a lovely night with Richard and Lupe at their amazing place in Casco Viejo (Thank you so much for the food, drink, great stories and photos).


Cruise ship coming through the Panama Canal, check out the speed. 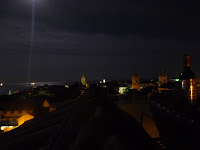