On the road early in order to beat everyone to a busy border and our first PanAm main border crossing.  Some rain and a lot of wind as we made the 50km to the border.  C4R6T2V7, Windmills which are always cool to me.


Wind mills to the border

A line of semi trailers indicated we were at the border where we had already planned to use a helper hoping to get through in 2 hours or so.  It was menacing from the start, thankfully the Nicaragua side went quick enough (45 min) and it all looked good at that point.  We were handed to the Costa Rican helper agreeing to pay both guys $1 per bike (the Nica helper agreed before and then jumped back when we tried to pay commenting that this was nothing and he didn't even want it which is a typical ploy.  He took the $3).

Unfortunately arriving on the Costa Rican side we were welcomed by a massive, and I mean massive, line of people trying to go both to Nicaragua and Costa Rica.  Holy Shit!  We paid $10 each to jump the queue which entailed standing like a sponge in a bucket of people who gave no quarter as we all tried to squeeze through the patrolled door.  The worst 30 minutes in a long time that felt like 4 hours while the helper was on the other side of the door just looking at me signalling to go through every 5 minutes only to be stopped by the security dude and yelled at by the crowd.  Yikes.  I've definitely spent $10 in a more enjoyable way before that day.  In addition to this pain and cost the helper wanted pay more than the $3 in my mind.  As Guy and David were in the final of what seemed like 100 stops on the Costa Rican side I agreed to $3.  He flipped out and said it wasn't enough and walked away.  I wanted to punch him, but let him go.  Shit, he had two other groups of people going at the same time so he was doing alright with the $30 from us in 2 hours (average wage about $500/ month so these helpers at $30 in 2hrs is great).

Finally on the road again after about 4 hours we pushed through a head / side wind all the way to Liberia for a Subway lunch, WTF?  Everyone was too hungry to search around so we paid Canadian prices for Subway in Costa Rica.  Wow.


Road from Border to Liberia C4R5T3V6, trees lining the road making it tough to see much more than the road. 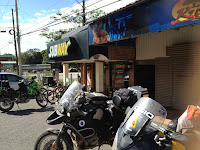 After lunch we rode our way to one of the more expensive places in Costa Rica = Tamarindo.  Beautiful beaches, food and people!  At first it was not paradise as we struggled to find a place to stay, but luckily snapped up the last room at Hotel Chocolate for $60 for 3 with A/C, kitchen and a pool (Dec. 26 to Jan. 15 the price goes to $120).  Great manager, Christian, out of California who was full of tips for health, drinks and food.

Sun and Beach in Tamarindo 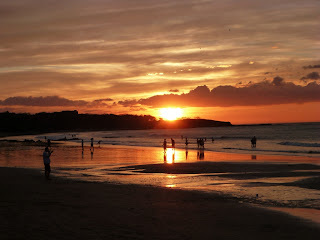 Side note: Hanging at Monkey bar around 8pm David and I met this guy with a noticeable head twitch which I thought may be turrets.  It was from surfing equalling 3 broken necks and more.  After some good chats about Tamarindo we started talking about football.  It turns out Eric's son-in-law is Hank Baskett from the Colts.  Who's that?  He's the guy who married Kendra Wilkinson (Baskett) from the TV show "Kendra" and firstly famous for being one of Hugh Heffener's 3 playmates appearing in the show "The Girls Next Door" (my favourite one).  Holy Crap, the people you meet over a beer is mind boggling.

Leaving Tamarindo we knew the day was long to La Fortuna, but still pretty good to get going and see some of the beauty Costa Rica has to offer.  Still lots of wind in the Northwest side of the country which we had to endure as we made our way back to Liberia and then Southest to Lake Arenal.  Tamarindo to Liberia C3R5T5V6.  On from Liberia our GPSs took us the most direct way which was also the tougher way.  A washed out dirt / rock road which I believe is off ruta 6 around Palmira.  Even though I didn't love it as it beat up the bike, it was a good experience and Bumble Bee did well. 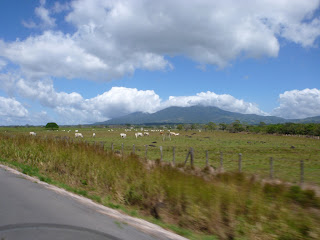 Tough to get a smooth video of off-road.

Out the other side of the rough road with a first look at Lake Arenal.  This was a great choice to ride around the lake to La Fortuna.  C7R6T4V8, great curves, greenery and homes along this route.  A couple bad sections from wash outs and some slow downs in the towns.  Should have taken a bit more time through here.

Video of road around Lake Arenal

After some wonderful riding around the lake we rolled in to La Fortuna and Luigi's Hotel (Luigi Jr. for real and his sister Karen).  Not a bad spot, but a little pricey with NO WIFI in the room.  It did have incredible views of Volcano Arenal when the clouds weren't covering it. 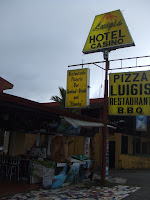 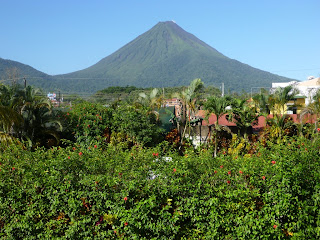 From the lacklustered La Fortuna you can do a shit load of tours to the Volcano, jungle, zip lines, white water rafting, hot springs, etc.  The town is really disappointing if you are hoping to find a community nestled in the mountains like a Banff, Alberta or Bend, Oregon.  We decided on the Hanging Bridges ($22/ea) which was ok, but probably only worth $5 as you can see all this stuff for free if you simply take a walk in the jungle.

Day trip to the Hanging Bridges and Hot Springs

Really cool to watch these massive ants run a two-way traffic system for metres and metres.  Not even sure where it ended.

Video of Lake Arenal and Volcano Arenal from the bridge

At the FREE Chollen Hot Springs.  Good times with locals and other tourist who don't want the super tourist experience($15 to 80).  Thought I would try my water proof camera that has a minor crack in the flash lens.  My theory of the flash lens being separate from the other components was incorrect.


Fun with the underwater camera - Lumix TS3 no longer water proof after the shock proofing failed in NYC.

With a tainted camera I finally took a break from photography, well for a half day until I remembered that my phone can take pics too.  On the road people were flashing headlights at me which meant nice bike in most Central American countries, but not Costa Rica where it means cops ahead (like in Canada, NZ, etc). Lucky enough for me although I saw a lot of cops in route I didn't stop for any of them.  Speed fines are $500 USD.  At one point I was signalled over and I signalled back that I would stop just passed them as I rode between them.  They didn't seem to care so I snapped the throttle and kept going.  I did feel a bit of stress the rest of the day, but found out later that if they weren't looking for a bribe not stopping was probably the easiest way to deal with the situation.

Good sections of road, but for the most part not a lot of curves.  La Fortuna to Aguas Zorcas (where the cops were) C4R6T4V6.  HWY 32 C2R7T5V8 with views of jungle and rivers I was happy with the straight roads.  Finally, Limon to Puerto Viejo you are given the opportunity to ride a nicely paved thinner road with one lane bridges along the coast that you could find in NZ (the surrounding plant life reminded me more of Tonga though) C3R4T3V8/9. 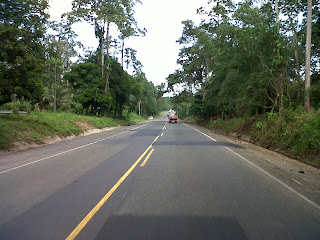 Puerto Viejo is good.  Definitely a rougher spot with good levels of crime from the stories I heard, but if you are travelling with a buddy you are quite safe.  I really enjoyed our Hostel, Kaya's place, and the super positive owner JT even though it could do with the removal of the resident drunk dude from the states (quite common through out Central America when you have Gringo Hostel / Hotel owners).  The bartender Sergio was great too constantly jumping on his scooter to get supplies (make a list dude).

Kaya's Place, right across from the beach

The plan was 4 nights in Puerto Viejo including NYE which we initially wanted to spend in Panama (Bocas del Toro) for cheaper costs, but I think it worked out pretty well and not too expensive at all. 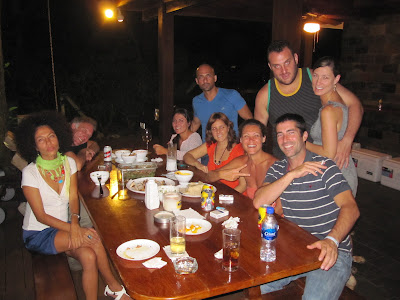 First day in PTO Viejo I met Alberto and friends on the beach when we were playing V-ball and they invited me to there place for dinner.  Beautiful place at the far end of town right on the water.  We were lucky to find it and even luckier for the invitation as the food and company was fantastic.  Only wish we could have got another game of Vball in to redeem ourselves against Julio's team.  Costa Ricans are full of different heritages as you can see in the photo.
Eat at : Chile Rojo for outstanding Sushi made by a very inexperienced talented chef.  They also have live music and Karaoke most nights so we went there quite a bit. 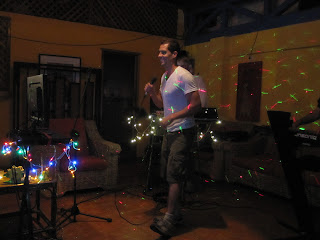 My first Karaoke solo so the old bread and butter = "Free Fallin".  Of course it sounded way better live. 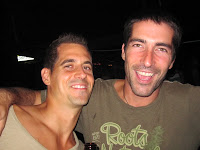 NYE was good.  We got to the beach in time to literally get in the middle of a fireworks display that was fun at first becoming dangerous like a Vietnam War fire exchange.  Pieces of burnt fireworks were landing on everyone, crazy.
Finding ourselves at the far end of town we took a drunken local bus ride at 6am instead of hitch hiking.  Mission accomplished = We made it to Sunset on NYE so that must be good right?