Quick Background note: The Darien Gap is the section between Panama and Colombia that has no developed road through it.  The 160 km span has not been developed due to expense, environmental concern and guerilla / drug traffic.  So there is no road connecting the Pam American Highway between Panama and Colombia.  This means you can either fly your motorcycle across or take a boat (and if you are taking a boat book 1 month early to make sure you get the boat you want!).  The typical boat trip goes through the Panamanian paradise that is the San Blas Islands and then crosses to Cartagena, Colombia.  Sounds as good as the Whittsundays in Australia which to this day is one of the best things I've ever done! 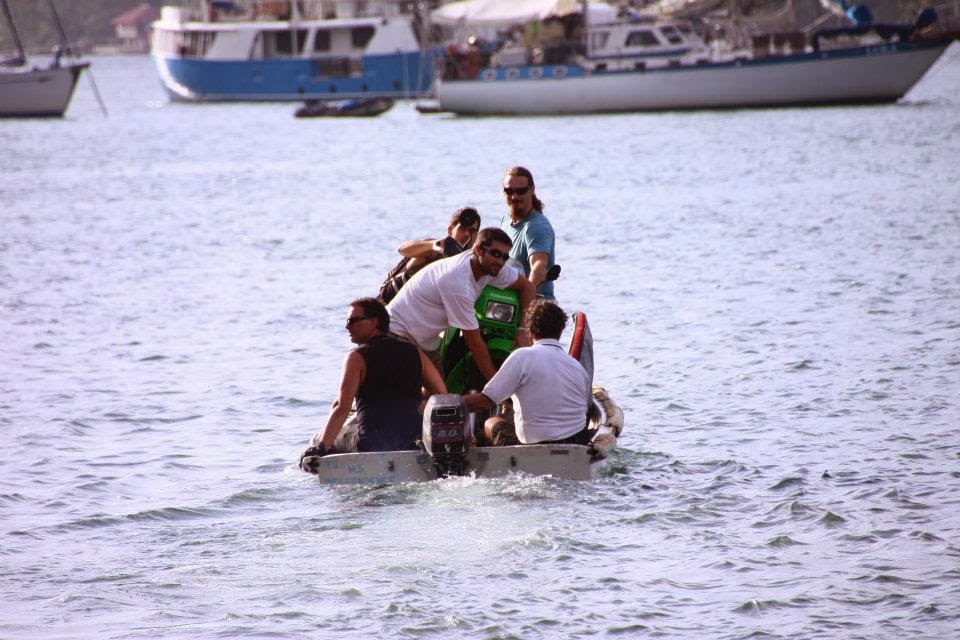 Hearing great things about the San Blas islands I was determined to take my bike on a boat and sail to Colombia from Panama.  This was to be one of my trip highlights.  As the open sea to Colombia is quite rough late December and January I knew it was better to take the biggest boat I could.  Unfortunately I screwed up and was too late booking the Stahlratte which is 30 m (big) and highly recommended so I chose another big boat, the MS Independence (25m), and convinced 4 others to join me.  SORRY GUYS!

After our late night and great night with Richard and Lupe in Casco Viejo we woke around 11am with hangovers and tried to break our reservation at Hostel Wunderbar not needing to go to our boat until the next day.  We felt another day in Panama would help us prepare more where there is at least one or two bike shops, not like Puerto Lindo, etc.  However, the german run hostel would not hear of it saying they were turning people away and if we didn't come they would take $15 per person from our $100 per person boat deposit (May be we should have let the whole $100 go).   So, we managed to get a 3pm check out extension and ran around grabbing a bike wash, bike oil, silicon and money! (For the boat we needed cash: $450 per person and $400 per bike to cross to Cartagena, Colombia).

The ride to Puerto Lindo which is 15km passed Portobelo (where we board the boat) was a short 2 hours with out lunch and cost us $5 each in tolls.  A rip off for 50km of Autopista C2R7T5V5 full of construction, the other 50km was free and quite nice C6R6T3V7, sea side after the shit hole correctly named "Colon".

Our first night was at Hostel Wunderbar in Puerto Lindo which was really nice.  To add to the ambience the place was transported and reconstructed from original hut structures in a village in the hills.  Nice.  Guido and Silvia are definitely a little crazy, which probably comes from 18 years on a sailboat.  Having said that they are good people and will help out with all sorts of stuff including bike maintaince, thanks Guido.  Definitely try the pizza restaurant next door (it's your only option in Puerto Lindo, but it's a good one!)


Sample of road to Portobelo C6R6T3V7

Hostel Wunderbar, and three Aussies Andrew, Matt and James playing cricket.  They were taking the same boat as passengers.

The next night we were promised we would sleep on the boat saving us accommodation, but "the old and wise" captain Michel claimed he had no crew so we couldn't (Definitely better that we didn't). Needing to make the boat for 8am with our bikes already on it we decided it would be better to stay at Captain Jack's in Portobelo (Mistake 26 or so on my trip) saving a taxi ride and using some wifi as well.  $11 for a dorm bed was alright, but the food and the Captain were lacking (and the wifi wasn't free).  Cap Jack enforces a curfew of about 11pm and tells stories of his battles with Guido from Wunderbar.  It's a small community with a bunch of sailors so drama is to be expected.  I would have preferred to stay at Wunderbar for a second night and the taxi in the morning would have been worth it.  At least we got to meet a bunch of the people jumping on the boat the next day and had a couple of beers.

The day after I had put the deposit down, along with 4 others I convinced, I began to hear bad reports about Captain Michel and his boat MS INDEPENDENCE.  By the end of the trip I could say he definitely lived up to the stories.  A poor job of loading the bikes the day before cutting the locals out of loading and packing money they normally get with other boats made a bad impression.  Knowing a little about sailing the captain's abilities in my mind were questionable and this was only his 4th passage to Colombia.  Yes he has been sailing for a lot of years and his boat is pretty much unsinkable, but I definitely got the feeling he was a corner cutting cheap operator.  This became very apparent when we squished 9 bikes (max load 8 bikes as advertised) and 24 people on the boat.  Yes we all had a bed below deck (below the water level) in cramped and hot quarters, but we had no space to sleep on deck at night with all the bikes and Michel's other crap laying around the boat.  For reference when I was in Australia on my Whittsundays trip all 22 of us slept under the stars on deck each night which was absolutely amazing (Perhaps that's the problem with travelling too much, it's hard to have the next experience live up to previous amazing experiences.  Man, I'm turning in to a junky looking for his next travel fix!).

So, I was expecting 2 days anchored off a beautiful island and 2 days doing the crossing with 1 night out of the 4 at sea.  In reality Michel kept the boat moving a lot allowing us no time to chill and drink our mass quantities of alcohol on board.  With the boat moving up and down and the storm doors closed we couldn't even access the front of the boat while sailing.  So, it became a long boring voyage aside from the one night anchored.

Day 1 = Visited Grand Island for 3 hours, had dinner and went out to sea from 7pm to 2am with people getting sick in the dark and no power to the toilets as the generator only operates 3 times a day for 2 hours.  Let's just say there were things floating in the toilets.
Day 2 = We woke in "paradise" as Michel put it "maximizing" our time in the San Blas Islands.  Chichime Island is lovely and a good spot to walk around even though we got hit up for $1 by a local Kuna for using his beach.  For dinner, toast and a half lobster each which Michel claimed was $100 out of his pocket (12 lobsters in San Blas would likely be $60, but that's nothing when Michel is grossing = $12500 or so over just 4 days)
Day 3 = Stopped in at another island during the day for 6 hours or so, before beginning the 36 hour crossing in open Sea at 8pm.  "Everyone, we make you as comfortable as possible", meaning you will all sleep on the floor in the outside dining quarters, or Bridge (see photo).
Day 4 = During the day I took on the sea from my quarters.  I put in my earphones and rode the sea for 1 or 2 hours at a time and then I would take a nap and do it again throughout the day.  At night I planned to sleep in my quarters no problem with the occasional poking of my head out my front deck access doors.  These were also my bathroom doors.  Unfortunately I would not be able to sleep in my quarters this night as the waves hitting the boat grew, water started coming in to my room around 10pm.  I went to have words with the captain as my deck access doors were not able to close allowing water in to my room and in to the rooms below me.  Once on the Bridge I found Guy driving the boat in this storm with waves 7 to 8 m high (at least one wave was as it came over the boat and in to the Bridge/sleeping quarters getting everyone wet and the bikes too.  F*^k I say, let's just get there.  I didn't sleep the entire night.

As the sun rose and the land of Colombia and Cartagena was in front of us a small tear may have formed with the end in sight and a new beginning of South America.  Incredible.

Thanks to all who survived and made the trip as best as we could including Paula and Diego who had the worst jobs.  Ok, Majo you deserve thanks to for being the girlfriend of Michel and having to say no to all of us when he would simply walk away.

In a nutshell regarding boating across from Panama to Cartagena, Colombia see the stats page http://thelifeofbrad.blogspot.com/p/tlob-to-argentina-stats-page.html

The San Blas Islands on the trip were great and could be even better with the right accommodation and trip plan.  In the end we survived the tough part of the trip.  It's important to have these experiences in life to appreciate the really good times.  Too bad we couldn't have done the crossing first and then enjoy San Blas after as it was tough to relax knowing what was ahead with the crossing.  I hope I get to have a good sailing trip in San Blas in the future.

Below, I hope the photos and video can tell the story...

My room and a little disappointment

Bit of a boat tour, and possibly no lunch.  Problems begin...

Some videos to help show how the crossing went.  Sorry if the audio is not the best...

Preparing for the crossing

First night in the open sea.  Not too bad and I was able to sleep too.

First day at sea, I took the ocean on


More video showing the accommodation and no one in their rooms

Settling in for the rough night ahead

Captain Guy?  Where's Captain Michel as we going in to this storm?

It's over and we survived the storm that hit us 30 miles from Cartagena.  No life jackets needed...


Next up, Importation and Northern Colombia...

What an adventure ! worst storm the captain had ever see.

We can say we went to war together heheand we won !

see ya in Argentina buddy.

That documentary was filmed on March 2013.