Delayed start as I held on for Dan to finish some property business in Santa Marta.  We never thought we would reach Medellin in one day as it was about 800+ km, but had no idea where we would stop.  The original plan was to go to a town near Bucaramanga which was about the half way point.  However, the day went well and the roads were straightish for most of it so we were able to eat up quite a bit.  Unfortunately with the late start, some construction hold ups and Dan's KLR acting up Medellin was about 200km out of reach and we were only able to make Puerto Berrio on the River Magdalena.  It was as far as we could get in the dark once the road turned to shit, so we found Hotel Magdalena with private rooms for $11.  Not a bad spot, but we had to leave the bikes out front, which in the end was no problem at all.  RECOMMEND Hotel Magadalena to stay and P-Way as a good spot to grab dinner.

Road notes: Santa Marta (hwy 45) first 150km C3R7T4V7/8.  Great greenery with a mountain backdrop.
Around 180km from Santa Marta there is a massive dip in the road that almost launched me off the bike!  It pushed me in to a standing position, holy crap!  Temp = Desert hot btw.  180km to Aquachica C4R6T5V7/8 Desert and Mountains with ranchlands.  Short stint on Ruta 62 C3R6T4V7.  Last section hwy 45 to Puerto Berrio not great, C4R4T3V?(night so no views).

A short day to Medellin, but through the mountains so curves and a slower average speed was to be expected.  Before we left "the real Colombia", Puerto Berrio, we went back to the cool train and car bridge to get some footage.  Check out the transport moto they have for it.


A curvy road up to Santa Domingo on hwy 62 C7R6/7T2V8 with no one around.  Excellent sweeps which I love.  The second part of the journey after a hill top lunch was on a rougher road, but still very doable as we dropped into the valley towards Medellin (1500m) C8R3/4T3V8. 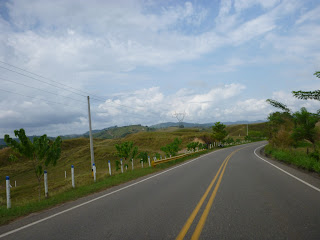 Curves through a tiny road side village.


This could be New Zealand if I was on the other side of the road.  Legally I mean... 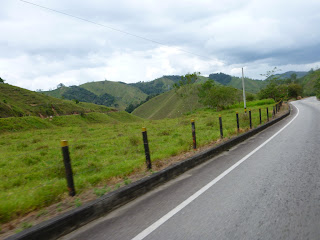 After looking around the tourist area for a couple of hours and seeing a bunch of the guys from the boat we decided to take the recommendation to go to this really nice hotel in a less touristy area - Itagui, Hotel Central Plaza.  This would be good as Dan and I would still need to speak spanish which definitely doesn't happen in the gringo zones and it was only a $4 cab to Parque Lleras the main spot.  Hotel Central Plaza is close to the clothing district and a major hooker avenue, which was very interesting to say the least.

As Medellin (Colombia in general) is a major motorcycle city with tonnes of shops this was the place to get services done.  Hell, they even have a Suzuki Factory 4 hours south of Medellin.  Paul the owner of Casa Kiwi where we originally wanted to stay recommended Carlos and his shop Moto House.  Thanks for that Paul and for hanging on to some of our stuff over the 3 or 4 days.  So, Dan and I headed over to Moto House, met with the very capable Carlos, left the bikes and helmets and took all our stuff in a taxi to Hotel Central Plaza.  My service included oil change (synethic $15/L) and filter, air filter, valve check and resealing covers so they wouldn't leak oil anymore and a new chain ($150 which was cheaper then the USA by $50).  RECOMMEND Moto House and chatting with Carlos who has continued to support me via email on my trip.  Total bill for all that work and parts was just under $500 and would be closer to $900 in Canada.

Video of Moto House when we picked up the bikes after 3 days in the shop.  I've never been to a shop so clean the mechanic can use his lap top (which was super clean too).


Up top at Hotel Central Plaza where the bar and spas are.


Central Plaza at night from the roof top

So with a 1 week stay at Hotel Central Plaza it was time to relax.  Dan and headed to Parque Lleras / Rosario for Friday and Saturday and then I truly chilled for 4 days in my hotel only going out for food and some shopping for GPSs and speakers.  It was a good break even though I started to feel like Hunter S. Thompson in "Fear and Loathing in Las Vegas".  This is probably why I lost my Blackberry somewhere, Urgh!

In general, Medellin is a good town with great beauty and a ton of Moto bike shops.  It would be easy to spend more time there, but this is only the start of South America...

Following people to where?  A Market?...


Side Story: 9 Bikes and Bikers crossed the Darien Gap on my boat (MS Independence - NOT RECOMMENDED) and we had one accident out of the 9 just outside of Medellin (Bello).  Nothing fatal, but enough to end Scottish Annie's trip when she and her Harley got sandwiched by a truck and a bus at low speed breaking her arm and leg.  In the end, what Annie thought would be 6 weeks turned out to be 6 months so insurance flew her back to Scotland.  Sorry Annie.  It sounds like you already have plans to return so best of luck with the recovery and your return to South America!