Best of luck Dan!  Leaving my riding amigo behind I made my way over one of the surrounding mountains out of Medellin and headed towards Bogota (10 million people!).  What a trip which included all kinds of road and riding conditions.  Oh and of course due to the rainy season a ton of repair works in the mountains crossing to Bogota just after Honda.

Climbing out of Medellin the road was great and the views fantastic (2600m).  C7R7T3V8.


Riding up the pass out of Medellin


Great Look out from above Medellin 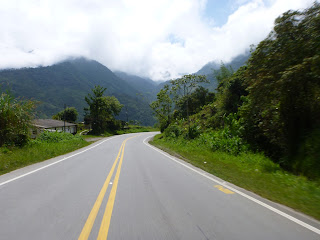 Side story: Looking for a lunch spot I stopped in at a road side cafe probably 20km before Magdalena.  They wanted $4.50 for lunch and I said in crappy spanish, "What, is this the best food in all of Colombia!"  Then I dramatically left, not really.  In the end when I ate down the road in Girardot I saved all of $.50.

From Girardot to La Dorada to Honda it was hot and straight.  C3R4T6V7, lots of traffic too and this super crazy driver!

Then there was Honda.  Nice town and I even thought of staying one night (of course I love the name), but I had to get to Bogota.  Had I known what was ahead I may have stayed ...


Traffic!!!  This would be the part where you would want to get a helicopter and get out of there if you were a truck driver.  The line of trucks must have been 5km or more.  After they finished the first section there was 3 or 4 more smaller blockades.  These truck drivers must be there through the night and then some!  Fortunately on a bike it's easier.  So, Honda to Guaduas C9R3T8V8 and Guaduas to Villeta C8R4T6V8.  An ugly section of HWY 50 for sure.

Motos to the front of the "long" line...


I decided not to edit this video so you can see that I do have to drop the camera some times in the name of safety.  Heavy traffic on the mountain. 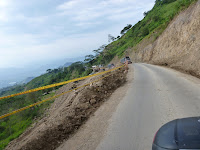 At least a couple hours later I was out of the mess (as seen in the videos above).  Last stretch to Bogota was a good road up through the fog with a touch of rain.  C4R7T3V6/7.

Cloud ride to reach the highland prairie going in to Bogota.


Night riding in Bogota a city of 10 million people.  I couldn't believe how good the traffic was at 6:30pm.  Sam informed me this was because of "Dias sin Carros" (Days without Cars).  Lucky me.

Sure Bogota's a big city, but how many times do you find yourself travelling all over a city.  You just hang for the most part in your areas.  For Sam, who I was staying with, and I, we toured Chapinero, Candeleria and Norte.  These are the 3 main communities in Bogota where you will find Ex-pats and a bit more money.  Sure the weather is not amazing with the odd shower through out the day and a max temp of about 22C, but the city is alive at night, especially in "Norte" where there is at least 5 square blocks of bars and restaurants (maybe more).  Anyhow, thanks for taking me in Sam and showing me around.  Hope to see you and Dan sooner then later!!!


Tire changing machine.  Too bad you can't carry one of these with you on the road.


Sam's B-ball court in his house!

Thanks Sam for taking me in and showing me around Bogota.  Good times!

Back on the steel horse after 4 days and heading south to Cali for a couple days.  A bit stuck getting out of Bogota with traffic a little tighter than my arrival as all the cars were back on the road.  Got out finally after finding my way and started up in to the mountains, rain and fog.

Views from a high bridge.  Lots of curves Ibague to Armenia with the pass at 3300m.  C8R5T6V8.  Lots of towns and construction with a nice valley view.

Began the day in Cali with a bit of rain.  It was reassuring to see that the Colombians actually slowed down and drove overly caution in the rain.  Different.  Took about 30 min or so to clear the city going south which is more than coming in from the north, but at least the rain stopped.  Cali to Popayan was full of green and sweeping curves.  Very nice C6R7T4V7/8.  Had a big feed in Timbio for $4 and then into an assortment of roads.  Timbio to Rosas C8R4T6V7 Construction!  Rosas to Mercaderas C6R6T2V7.  Mercaderas to Taminango C7R5T3V7.  Mountains and valley.  Taminango to Chachagui C3/4R7T3V7.  And finally Chachagui to Pasto C7R7T3V8 which was fantastic.

Fast ride through a valley in the middle of the day


Check out this packed bus


Rough road about halfway to Pasto.  Rosas to Mercaderas C6R6T2V7 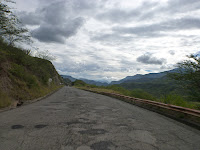 Backhoe on the hill adding big rocks to the road, what?  I guess better to pull them down in a controlled environment then having them rolling down when ever.


Riding between to valleys, view from a bridge. 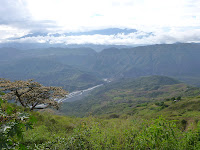 High riding in the curvy stuff

Colombian tunnel and a view of huge valley.  Nice!


In to the quiet town of Pasto after a full day which included a chain guard snapping off (how? I have no idea?) with a zip tie road side repair while in search of my selected accommodation I was followed and bugged by this guy on a 180cc bike.  "Where you going?  you alone? I show you a nice hotel, you alone?"  Of course all in spanish so my understanding was lost on what exactly he was trying to do with the "Are you alone?"  We stopped at this more expensive hotel and had a little chat.  Once he said the magic words "I'm an Engineer" I was happy to hear anything he had to say.  It turned out he wanted to know if I was by myself in order to be able to offer me a bed at his house.  Cool!  I'll take it.  Having only one free bed was why he kept asking if I was alone.  Too funny.  Thanks for the hospitality Andres and of course if there is anything I can do for you or your family down the road let me know!

The kindness of strangers.  Friendly Andres putting me up for the night.  Always good to hang with locals and a bonus to save accommodation costs too.