Road wary after having a cold for 5 days with a bit of a stomach bug too a rest in Quito would be welcomed and I found a comfortable spot to do it.  Of course I first had to make my way over the Colombia / Ecuador border (my first South American border, which are considered much easier than the Central American borders).

A nice ride Pasto to Ipiales in a valley most of the way with an urgent "rest stop" halfway C7R7T2/3V8.  Oh and don't miss Las Lajas, UNBELIEVABLE!!!

Finally around midday I found my way to the border which is about 30 minutes from Las Lajas.  The Colombian side was super quick.  They stamped my passport out in a 2 min line and simply took my bike paper work and told me I was on my way.  I planned to check in to Ecuador next, but some how missed the offices thinking they were further down the road and not right beside the Colombian ones.  Anyhow needless to say I stopped 4 km in to Ecuador admitting to a cop that I had no papers to be here.  No problem, so back I went to wait about 30min for my passport stamp and another 30min at least for my bike paper work.  Still not terrible and the bonus was I found assistance from 3 keen Colombians who visit the border hoping to practise their English with a foreigner.


Similar to Nicaragua, I was told Ecuador had great roads and who ever told me this was 100% correct.  What a treat after the border C6R8T3V8.  Great sweeps and some outstanding hill side views with fields outlined by trees and bush (see photo).  Brilliant curvy sections to Chata / Carpuela C8R7/8T3/4V8 where I stopped for some super cheap gas($.35/litre).  Then on to Ibarra C5R7T2/3V7 and finally the last 50km going to Quito which is also worth mentioning with a nice mountain climb and cool valley views C7R7T4V8.


In to Quito around 5pm with reasonable traffic for rush hour.  It was slow, but it was rush hour.  Prices for accommodation definitely lower than Colombia as I found a place with private room/bathroom for $12 with Hot water, Good Wifi, a big old desk to write, secure parking, right by the bars and a comfy bed (One of the best accommodations of the trip!!!)  The place is connected to El Aurpo Hostal (not a Hostel, but botique hotel).  It was so good I decided to stay 4 days in Quito.  Hey, the town is pretty good too with very reasonable priced restaurants, a good night life, a beautiful Old Town area and very friendly people.  I stayed near Plaza Fuch (in Barrio Mariscal).

While in Quito I also met up with fellow Panama to Colombia boat mate Conor and his 2005 V Strom where we both had work done at City Moto Sport by Willy (Give it a 50% Recommendation).  Conor and I had some great experiences at restaurants and bars around Plaza Fuch and even got a private tour of the Museo de la Ciudad by his friend Carolina.  As well I watched as Conor provided a film crew with his opinions on Tourism and Gentrification.  Be sure to check out his Website for more as it is very colourfully written with great photos.
http://twowheeledtravels.wordpress.com/

Side note: After the real equator I went to the more popular Mital del Mundo which was figured to be the equator before GPS existed.  A massive line to get in with cost of $5 or so, so I said stuff it and left.  I was equatored out!


Below some photos from my nights in Quito.  Thursday = Salsa lessons, Friday = Turtle's Head pub for $5+ pints which is ridiculous for Ecuador, went with new friends Christian, David and Juan to "El Aguijon" an alternative rock / dance bar for a bunch of drinks paid for by the boys (thanks for that guys and the foosball shots Juan), Saturday = Kidnapped by a Stagette who also bought us drinks!

Made my way out of Quito easy enough to find out that I had a vibration issue in my front tire between 40 and 60km/h.  Not bad enough to stop riding, but bad enough to turn around and have Willy at City Moto sort it out.  Short story - Willy checked the tire and rebalanced it finding nothing wrong even though there was still a vibration at 40 to 60kph.  His conclusion was that the weight in my bags was not evenly distributed which was causing the problem so I headed to the coast.

Unfortunately my second time leaving Quito was not as pleasant ending up on the wrong road here and there taking an hour longer finally clear the city.  This meant 2 things; 1) I would not make Montanita today and 2) I had no idea where I would stop which actually relaxed me allowing me to ride until I decided to call it a day.

Ride Report: Quito to Latacunga C4R8T3V7 fast with sweeping climbs and descents.  Latacunga to Zumbahua C7R3T5V8 bad conditions with dog chases and near drops in the mud.  Zumbahua to Pilalo C7R7T2V8 lost the traffic and the villages for a good bit of downhill with nice pavement.  Finished the day with a push from Pilalo  to Quevedo (C4R5T4V6) which was warmer and flatter with some chopped up roads, Temp: 25C. 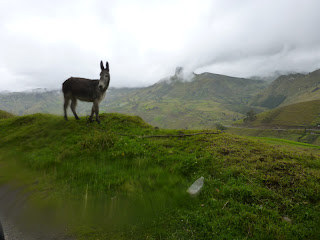 Wet and foggy with a fresh rock slide.  Cool to encounter the rocks through the fog.


Over the pass and coming down to a warmer zone


Not out of the rough stuff yet.  About 100km to Quevedo

Super Side note: Kindness of strangers!  Arrived in Quevedo with no clue where to stay.  While looking around a guy in a truck was yelling at me and almost bumping in to me.  With out panic we stopped at a light and he displayed his Motorcycle sticker on the truck.  Ok, must be a great guy then.  So I followed him to a hotel where I met another member, Augusto, of "Hormiga" Moto Club who allowed me to park my bike in his shop for the night right next to the hotel.  Great!  I checked in to Casablanca for $10USD which included a private room, bath, fan and TV with no Wifi of course.  Good enough for me as I would only be in Quevedo one night.  In good spirits the biker boys invited me to go for dinner and then a couple beers at their club shop where we could discuss my tire problem indepth.  Did I mention that this all had to be done in Spanish...

Big thanks to Freddy, Augusto and Nelson for everything!