View Larger Map NOTE: GOOGLE CAN NOT GENERATE MY ROUTE ON E582

Tire vibration, urgh!  Met up with Nelson and Augusto in order to touch base with the Hormigo shop guys about my tire issue.  They didn't show so we went to a couple other spots Nelson knew and after 2 more balances and no change to the problem I decided it was safe enough.  Nelson and I had a quick lunch, I jumped on the bike and made my way to Montanita for some much wanted sun and beach.  Thanks for all the help guys!

A different way to balance a tire.  No one charged me for any of their balancing attempts this day.  Cool.


Big side note: Feb. 14, 2012 was the 5th anniversary for my most serious motorbike crash that happened in NZ in Feb. 14, 2007 (also the reason I have that big tattoo on my shoulder).  In 2007 the crash happened due to mechanical failure and today I was riding with a vibration problem (mechanical) which kept my 5th anniversary at the front of my mind!  Here's a link below or you can use the "Search" in the right corner "Crash Ninja". http://thelifeofbrad.blogspot.com.ar/2010/04/april-2010-film-making-and-tattoos.html

A smooth day of riding with a lot to see from low lying flooded farmland and very green foothill mountains passing back over to the ocean!   Quevedo to Daule C3R7T2/3V6 a flooded area reminding me of parts of Central America.  Daule to Jipijapa C3R7T3/4V7 a bit more towns and big smooth curves between long straights.  Jipijapa to Puerto Cayo C7R6T2V7, Really nice, green foothills finishing at the coast.  Puerto Cayo to Montanita C6/7R7T2/3V8 similar to Hwy 1 in California riding along the ocean and through pieces of Machalilla National Park (Top 10 ride).

Through the green hills with a first look at the ocean since 1 month. 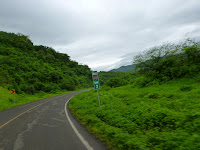 Staying at the Montanita Spanish School for $15 / night in a 6 bed 2 storey dorm with 2 bathrooms and lots of space.  Prices are double or more during Carnival so $15 was good and would have been $10 if I took a week of lesson (which I should have!).  Anyhow, the place is quiet since it's on the other side of the road from the big night life, it's beautiful with a nice pool and the people are fantastic.  RECOMMEND!

But what about Montanita you say?  In a nutshell Montanita is a beach town with a good party scene, great food choices both super cheap and a little bit more, fruit smoothies on most corners, surfing and most importantly Volley ball (so good, I was too shy to play and didn't have a partner, where was CK?)!  Tons of nice spot to stay too and if you come any time except Carnival you should be able to get something great for $20 or less.  I will return!!!

Carnival note: Basically a bunch of people running around dumping water and spraying cans of foam on everyone.  Really anyone is fair game.  Mid February for most Latin countries.  I thought Montanita was expensive this time of year, but I heard people were paying $80/night for a dorm bed in Rio, Brazil!

Montanita First Night (2 days to Carnival).  This night set the tone for the week.  I didn't wake up until 3pm the next day and I swear I was drugged (?) or was it the "cockroach" shot? 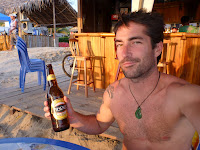 
A little sample of the music in one of the bars


A controlled Sunday eve (3am) was needed in order to hit the road a day before the hords made their way back in to the cities.  Miss you Montanita!

On the menu for the ride this day was coast, on coming traffic, a lot of tempurature and elevation changes (max 3000m or so) and a 100,000km milestone reached above the clouds.  Montanita to Guayaquil (biggest city in Ecuador), First section on the coast C3R6T4V7 and the second section on Hwy E70 C3R8T2V6, lots of oncoming traffic as people tried to get out for one beach day inevitability returning the next day in worse traffic (silly I say!).  So, this meant Guayaquil was a ghost town, YES, making it very easy to blast through.  Once passed Guayaquil it was up in to the mountains and on to Cuenca to meet James and Mark with my used front tire that I left at City Moto (Willy claimed he didn't have it, but after 15 minutes it magically appeared, Thanks James!).  The final 100km to Cuenca C6/8R6/7T2V8, up in to the mountains and outstanding!  Two lanes through the fog with out rain then flatting out along a river leading to Cuenca.

Curving my way above the fog

Once I arrived in Cuenca it was the same story as Guayaquil, dead quiet.  I made my way to Alternative Hostel to wait the arrival of James and Mark.  Nice place with a great layout and good parking (Reserve a private as it's the same price as a dorm bed).  It's a new hostel, good luck Xavier.


Having Monday all to myself I went for a walk around town to find...not a lot open.  A very beautiful city that was quite sleepy during Carnival with the odd drive-by water spray and foaming.  I did find a tasty fast food chicken place for $4 and that was me for the day.


The next day James and Mark arrived with my tire and an American dude named Clark.  We quickly got on the tire change which confirmed that the Conti Trail Attack was defective.  So, back to the Tourance which had at least 1000km or 6000km left (6500km to be correct) with no vibration!


Once the business part of the day was done it was time for fun and what better day to accomplish that then during Carnival.  So, we jumped on the bikes and became a gang of hoodlums buying water balloons and foam spray cans from the locals who we in-turn began a battle with.  It was like buying drugs from a dealer and then getting the dealer high.  Riding around was perhaps a little dangerous, but really fun and no damage was sustained unless you count our soaking crotches. 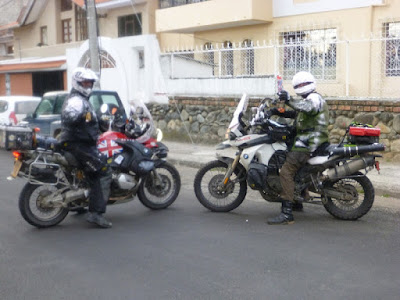