After only one night in Coroico (me sad) I was back on the road pushing South to Argentina with a couple key stops still to do in Bolivia; the Potosi Mines, Salar de Uyuni and a challenging road to Tupiza.

A long 700km to Potosi, the highest city in South America, that began at 8am.  I had debated going to Potosi to do the Silver Mine experience as I had heard it was an experience, but not fun and more a test of endurance.  I was on the fence as this didn't appeal to me, nor did being 100+m below the earth with few escape routes (it turned out to be one entrance, same exit and had I know that before I would not have gone).  Path of least resistance.

From Coroico to La Paz I enjoyed the newly made Hwy 3 in the sun C7R4-7T2V8/9 spectacular views, tunnels, nice road and elevation.


Why not a video of a Bolivian tunnel and the magical scenery after. 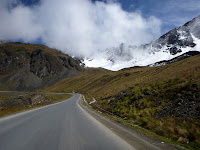 It took about 35 minutes to fight my way through La Paz seeking relief at the end only to be destroyed by the jammed traffic in El Alto for another 20 minutes which covered only 8 or 9 km.  With the traffic in my mirrors I really began to enjoy the day as I took in the flat, farmlands C1/2R6/7T2V6/7 to Challata.  After that the day got a lot colder as I climbed up to 4300m C5R7T2V8 and eventually entered Potosi after incredible riding in sporadic rain C7/8R7T2V8.


100km to Potosi, cold yes, but a smooth road can still warm the heart


Potosi was not as lovely as I expected, but I didn't come here for lovely, I was here to survive a Silver Mine tour.  And that's what I did damn it.  Initially I wasn't doing the tour, but enough people convinced me that I had to.  It is always easier to face a mountain in a group than alone.  Luckily my group "Sexy Dynamite" was full of great internationals (no local would be dumb enough to pay for this tour!).  I would RECOMMEND a tour of one of the mines (likely Candaleria), but I will tell you right now you probably won't enjoy it.  I'll let the photos and videos do the talking...

The trolleys don't move too fast, but when there's no space you want to be sure you are out of the way of the 2000kg bin on wheels.


Going down to Level 2 we lost one of the group due to claustrophobia.  I was very close to going with him!


Getting out and why hard hats are so important!

Potosi to Uyuni where you will find the Salar de Uyuni (Salt flats of Uyuni) was supposed to be a great new paved road and will be when they finish it!  A fantastic first 100km on this road C6-8R6-8T1-3V8/9 mountains, badlands, cacti, red rock and sweeps.  Took a good break to hang with the cacti and have a snack.

Good section of road out of Potosi with great corners. 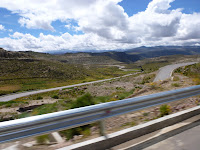 Sad side story just out of Potosi: Unfortunately with a good road comes higher speeds not only for the bikes, but all traffic.  About 2 weeks after my ride through this exact section of road our good friend Kevin Irvine from the Darien Gap Boat suffered fatal injuries in a collision with a truck.  RIP (http://www.facebook.com/kevinaye).

Pleased Brad not aware of the construction and dirt road ahead.  Just hanging with Cacti. 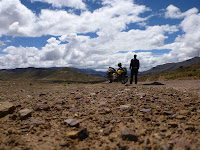 After a nice break and conversation with a cactus the road became less attractive.  I found myself in 10km of dirt and construction, a bit of pavement and another 30km of dirt to finish the day to Uyuni C4R3T3V8 bad road, but great views.  Riding up to and in to Uyuni I was taken back by how rough it was considering (at least I thought) it's a major tourist destination.  It looked like a ghost town on my arrival. 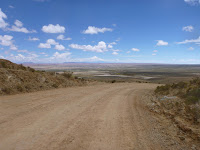 Salt Flats and Train Cemetery the must sees.  Get a tour?  Due to the rainy season the only good way to see the Salt Flats is by 4 x 4 tour which only go around 11am and cost $80 or so.  Unfortunately it was 2pm so I would have to wait for the next day for a tour and staying in Uyuni for only this was not enough so no tour for Brad.  Instead I jumped on the bike and went for my own tour hoping to get close enough to see something.  Oh, I saw something, enough for me in the time I had anyway.  Check the photos and the photos of the Hotel made of salt!


Incredible, like if the ocean and beach were reversed. 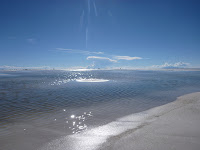 The second leg of my self guided tour was at the Train Cemetery which I smartly planned for sunset.  Only 1km out of town, if you don't pass it, you will find a bunch of units past their prime just begging to be photographed.  Enjoy.  *Note: If you haven't been on a swing in 10 years or more, don't, you may throw up.

Getting a taste of the Salar de Uyuni and really wanting to get to Argentina I decided that was enough Uyuni.  I was hoping to push to Tupiza for one night and then in to Argentina for St. Paddy's day.  Only 210km to Tupiza, but the road was one of the worst of the trip.  Of course the views on this day were spectacular and the ride experience well worth it!

I started around 10am planning to take it slow hoping the 200km would only take 4 hours, which was close enough.  Uyuni to 80km mark was mostly quick dirt (smooth enough road) and dead straight C1R2/3T1V8, but this doesn't mean I didn't have a bit of slippage going through the mud and river spots.  80km mark to Atochi C7R3T1V8 river bed riding and lots of colour change.  The last leg was Atochi to Tupiza and equally great with more colour-filled mountains and wildlife C5-7R2-4T1/2V8/9.  Once again, like Santa Teresa in Peru, I was very happy to see beautiful pavement thinking to myself that would be the last dirt of the trip as Argentina is supposed to have great paved roads (yeah right!).

That damn chain guard again!  How does it keep breaking?

Great video of curves ending on the discovery of a tiny little settlement in the valley before Atochi.


360 view after the quick climb out of Atochi


Tupiza was a much nicer location than Uyuni and from my experience a much friendlier attitude especially at the hotels.  It's not a bad town and less than 1 hour from Argentina (I would have pushed on if Bolivia wasn't so cheap and I didn't have so many bolivianos to spend)

Side Note - Chain guard repair: Friendly William from the neighbouring tour place took me to buy an aluminium welding rod, which we brought to his friend Orlando who in turn welded my chain guard back on the bike for a total cost of $6USD (cheap yes, but I did do all the tire removal myself, I'm cheap labour too).

Missed: The Death Site of Butch Cassidy and the Sundance Kid which is about 20km out of Tupiza on a different rough road than the one I arrived on.  Next time.