Up early for sure knowing that I was less then 100km from Argentina my PRIMARY goal of the trip!  Good bye Bolivia and hello Salta for St. Paddy's day was the plan(or may be not?).

Tupiza to the Argentinian border (Villazon) was excellent as expected coming from the mountains in to high elevation prairie C7R8T2V8, that's a Bolivian 8 for road condition which may only be a 7 in other countries.

Intro to the day, bye Bolivia.


The last of Bolivian scenery for this trip.

I arrived at the border via a side road (must have been as it was beat up with no traffic) in search of a spot to park.  Leaving the bike as secure as I could I lined up at the Bolivian immigration post for about 10 minutes.  When I got to the halfway check officer he took me to the front of the exit line and I was out.  Damn it, I was sure I asked the right questions in line, but now that I think about it it's likely the people in line had no correct answers for me anyway.  Stamped out of Bolivia I grabbed the bike and headed to Argentina (50m) where you do both aduanas (out of Bolivia and in to Argentina with the bike) and immigration in to Argentina.  Exciting?...

No, not exciting, as Argentina being more westernised is definitely more thorough forcing me to open my cases and provide my "World Insurance".  In the end about 30min or so was needed walking from office to office and I was now officially in Argentina.  Best part, well 2 parts; First was I exchanged a couple USD with the aduana officer for pesos and the second was as I rolled up to the gate an officer prepparing to stop and search me again was called off by the aduana officer I just changed money with.  That felt good.


Ride report: Arg border to Tres Cruces C2R5T2V7 straight road and potholes, where were the great Argentina roads?  Tres Cruces to Humahuaco C4-6R6/7T2V8 began the mountains and valleys of RN9.  Humahuaco to SS de Jujuy C5R7T2V9! colourful mountains like I had never seen before, wow.  SS de Jujuy to Salta on what looked like a full size hwy on the map that turned out to be this mini highway that put me in a bizarre world up until 10km from Salta (check the photos) C8R5T3V7 tight shoulders and limited view do to surrounding trees, but a truly different experience on this paved road only really wide enough for bikes, but with cars and animals on it as well.


After Humahuaco, check out the colours and textures of the mountains. 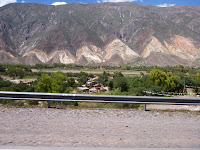 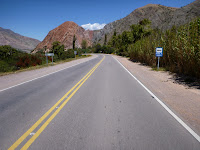 After SS de Jujuy ruta 9 to Salta turns in to a unbelievably narrow highway. So weird

Once in to Salta I searched around a bit looking for a good price on a hotel.  Coming from Bolivia I just wasn't able to adjust and finally gave up taking a room at a very nice place for $45USD /night (most expensive hotel of my entire trip!).  I dropped my bags, bypassed a siesta and went in search of food and an Irish pub.  I found my first empanadas, but no Irish pub as it was closed last year.  Without a hostel community to draw on I was left to make my on St. Paddy's.  In the end I found myself in a bar drinking Fernet and coke with a semi-pro rugby guy and his girlfriend (how do they drink this Fernet stuff?)


At Pena Pachumama for some live entertainment and a great steak and beer for under $20. 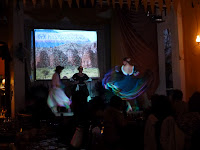 In the morning the question in front of me was... Do I head to Chile to the desert following other riders' paths or stay in Argentina making my way to Santiago, Chile the more economical way(Arg is cheaper)?  Feeling like I just got in the country (and I did just get here) I decided to stay at least one more day in Arg and headed to Cachi on the advice of the front desk at Hotel Ocy.  Apparently it is lovely.  I collected some pesos from a bank machine and jumped on Bumble heading west with the intention to go to Chile from Cachi (if only the road was paved this may have happened).

Alright, so maybe I wasn't in love with Cachi, but getting there was fantastic.  Only 150km from Salta and really great.  The first section on Ruta 33 started paved and turned to gravel.  Not great, but the scenery was outstanding C6R7T1V8.  A climb up to Piedra del Molino C8R2/3T3V8 switch backs and views.  Once I reached the foggy summit it began to open up to fields of cacti and badlands, excellent C6R8T1V9.  Of course this all ended when I ran in to the FAMOUS Ruta 40 which is not famous for being a nice road, and the reputation was spot on C4R4T3V7.  I only had to deal with 15km to Cachi which was doable, but this was the paved portion of Ruta 40 so what would happen riding this tomorrow, not paved?

Cachi, it's a quiet town with a nice cemetery on a hill overlooking the land.  Oh, and at night, this night in particular, it was the Fiesta de San Jose.  If you are doing the 5000km of Ruta 40 to the South of Argentina, Cachi would likely be your first or second stop in the North of Argentina.


I just had to stop here and get a panoramic video of this scenery.


The Sunday night celebration in Cachi with fire and fireworks.  Don't worry I don't know what I'm saying in the video either. 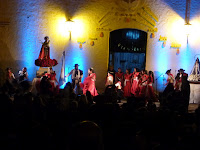 Well, being in Cachi definitely changed my path as it was 200km of gravel on Ruta 40 going north and then 250km to the only real town after crossing a border or 150km of gravel going south to Cafayate staying in Argentina.  Plan B was the go which meant I was now crossing to Chile at Santiago, going south a bit then cross back to Arg and eventually heading towards Buenos Aires.

The famous Ruta 40 that Che Guevara rode on his trip around South America (Motorcycle Diaries) and many have taken to the very South of Argentina.  Certain sections of the 5000km are paved in some of the provinces, but not in Salta where I had to ride 150km.  This took about 4 hours at an easy pace stopping along the way here and there knowing I wasn't likely to return any time soon.  Cachi to Cafayate on RN40 C6/7R2/3T2V7/8 rock, sand and dirt until San Carlos.  A really good experience both to see the route and to build my ability off road.  And where are the nice roads of Argentina, haha! 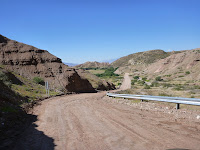 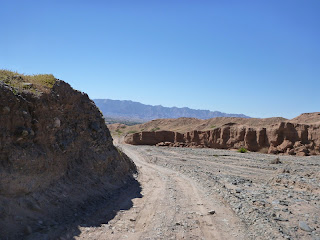 Simple agenda for my two days in Cafayate = relax, go to a wineries, taste wine, make friends, try a rabbit empanada and goat stew + take a spin up to the Devil's throat on the magical hwy 68, C6R7T2V8/9 north of town.

I was very excited to get to Cafayate.  A smaller town (felt like 2000 people) with a good amount of wineries within walking distance (reminded me of Martinborough, NZ).  I grabbed a room off the main Plaza at the very Italian owned Hotel Briones that was under construction.  Negotiations were successful scoring a good sized room, TV, private bath and great bike parking close to everything ($25/night).

RECOMMEND: Restaurant Baco, Nanni an organic winery and the ride north on Hwy 68.

Sad Side Story: One of the many begging dogs at the BBQ place wasn't paying attention and got clipped by a car.  1 minute of screaming and then he just sat at the curb after dragging himself over without enough strength to get to our table.  Everyone was sad.  A drunk guy hanging around went to the dog with a plastic bag in hand and the crowd gave a roar of "hold on buddy!"  After discussion the drunk agreed to take the little guy to the vet down the road, so JP and I resurrected a box from some old cardboard.  Maru and JP slowly lifted the dog in to the box with out any yelps then placed him and the box in the basket of the drunk guy's bike.  Success! at least until we watched  the drunk guy driving off with a noticeable lean to the right.  After a wobbly cross over the whole street he dismounted and decided to walk the bike the rest of the way with the little guy in the basket (sorry I don't have a better photo).


Excellent ride through some of Quebrada de Cafayate 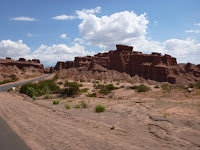 Ready to go to Mendoza, but unfortunately it was more of a 2 day ride so I needed a halfway stop.  A quick stop in at the Quilmes Ruins (an unconquerable people, pre-spanish) which you can miss if you have other ruins to see.  After that I avoided Ruta 40 which took me for a bit of a circle route passing through some rain forest and then eventually getting to Los Rioja a nice enough town in the middle of the prairie.  The only thing to mention here was that I left my bank card in the machine.  The damn thing gives you the money first (the opposite of Canada and everywhere else) and eventually returns your card.  Of course I walked away without my card having my reward in hand.  Out of my 3 Credit cards and 2 Bank cards this was the best one to lose as no one can use it with out the code (credit cards would be another story).

RECOMMEND: If you are going to lose a bank card make it a debit card!

Road report: Cafayate to Quilmes Ruins C5R7T2V7/8.  Quilmes to Tafi del Valle C5/7R5T2V7/8 climb out of the valley some great views looking back and looking at Tafi with some nice curves, bumpy road.  Tafi to Montress (hwy 307) a bit of rain and rain forest, not much to see on this tree enclosed road C7R4/5T3V6.  Montress to Catamarca C3/6R7T2V7 went from straight to sweeps in the mountains.  Final leg Catamarca to Los Rioja C1R7T1V7 straight and flat with views of the mountains to the west.

Mendoza today!  A tranquil city in wine country only 200km from the Chilean border with a perfect climate (at least when I was there).  Wasn't looking to do any wine tours this time, but interested in the possibility of living there.  It's possible!

Video opening to the vast prairies and some road DIPS.


You don't see a paved bike path like this so far out of the city, at least I never have.

Made it to Mendoza around 5pm after grabbing a well deserved hamburger and coke for $2 on the way in to town.  Viewed a couple hotels and ended back at the first one with a shared bathroom between two rooms.  Super friendly family run place, Hotel Laser ($18/night, owned by Carlos and Susanna).


Simple plan in Mendoza = relax, eat at some good restaurants and have some wine, and see how liveable it is.  Special thanks to Alex and Emilio who I met through Alex after he told a bad joke in the bathroom that I didn't get in Spanish or English.  The boys invited me to their table, took me to a rough, guys only bar for a fantastic experience of live music (we passed the guitar around and I sang and played Free Fallin) and finally to a red hot club accessed only through an underground parkade.  They didn't let me pay a cent!  At this point I would say I like Mendoza.

RECOMMEND: Hotel Laser, finding to cool guys named Alex and Emilio to show you around town.

Classic guitar and singing.  Apparently if he mentions you in the song you have to give him your beer.

How to use a Bidet, good to know.