Made my way in to the very high end community of Palermo easy enough.  I was very surprised how easily the traffic flowed considering the size of the city.  I liked this place immediately.

The first couple of days I met up with David and Gui and stayed with them in Palermo.  David was there for only for my first night.  It was good to see him before he took his bike and flew back to Arizona to do more travelling in the US and Canada (he'll be in Aussie in December or so).  A very nice loft style apartment in Palermo going for about $550 a week.

Sweet Side Story: While out for dinner one evening Gui stumbled across a wallet with only identification remaining inside.  Regardless we decided to find the owner and the best way to do this was through FB.  We did a search and somehow got to Patricio through his friend who I think just made a page for him that day.  Within 48 hours Patricio contacted us and he came by to get the wallet.  A really nice guy who speaks english as well so we had a good chat.  He invited us to Sugar and we met up with him the next week.  My first BA friend.  Note: This is not the first time he's lost his wallet, but at least we were able to save him 4 weeks waiting on new ID from the government.  Good deeds = good people. 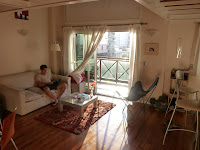 Leaving Palermo me and the Gui machine moved over to Nunez to a place owned by my best friend's brother's wife's sister, Soledad.  It was a little further out than the flash Palermo place, but a much better price, lots of shops around, parking included and the subte (subway) very close.  A great place to really feel Buenos Aires and what everyone deals with on a daily basis (or as much as two non working guys could).

Our first couple of days were internetless (a new word for Webster's) until we begged our child expecting neighbours to use their Wifi.  Thanks Fernando and Tatiana and congratulation on the beautiful baby boy Julian.

Pretty routine days in the Nunez place where Gui and I kicked back after riding for 6 months from Canada to Argentina.  Reaching my end goal of the trip I was loving just sleeping and taking in my surroundings.  I guess the highlights for the 3 weeks would be visiting an Argentinian dentist to get a crown put on a tooth that blew up, meeting some locals and simply cruising around the city checking the architecture and people.  Gui was a bit of a tour guide with his better spanish and 2 weeks previous knowledge of the city before I arrived.  I think of Buenos Aires as the poor man's version of New York because everything costs 75% less than New York.  A good steak dinner with a bottle of red, although more expensive in BA than other parts of Argentina, is only $20 or less.


Oh crap!  Broken tooth.  While I was enjoying a nut filled pastry I crunched into a nut shell.  I spit the shell out and continued thinking that was a close call.  If you have ever crunched on something hard in your food, like me, you probably figure it was just unlucky that one piece of shell got in the mix.  So, I figured I was home free to bite in...No.  Two more shells were crunched and the 4th was my tooth now in the mix of food which may have broken off on the 1st, 2nd or 3rd crunch, who knows.  The good news was I was able to find a lovely English speaking dentist near by who was friend's with Sole, Dra. Natalia Karol.  And the other good news was dentistry in Argentina is 25% or less the price of dentistry in Canada!  My Xray, repair and crown would have cost $1500 USD in Canada.

Another night I met up with my new friend, Diego, I met in Rosario.  Bar Club Culture Matienza about a 5 minute bus ride from the apartment.  Roof top patio accessed by the most narrow and dangerous stairs I have seen at a bar (not possible to legally have this bar going in Canada).

A day on tour with Gui and the bikes.  Checking out the city centre. 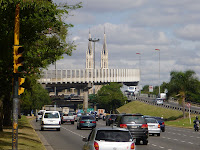 In and around Recoleta Cemetery.

DON'T RECOMMEND: Tarts with nuts as they often have shells that break teeth.  Trying to sell a motorbike in Argentina as it's illegal and people pay very low for just the parts.