Back to Argentina and the furtherest south I would make it on this trip, San Carlos de Bariloche.  The town is commonly referred to as just Bariloche a beautiful place firmly nestled in the Lakes District.  A couple days in northern patagonia and then some long straight shots to get back to the centre of Argentina were on my agenda over these next 4 days.

I left Pucon saying goodbye to Conor with the words "Ride Safe" meaning so much more that morning after hearing the news of Kevin's death the night before.  It was said that his accident occurred about 20km from Potosi at the start of his day so 20km was locked in my mind now.  A true point to be aware of on any riding day is the first and last 20km because it takes a couple of kms at the beginning to settle back in to the seat and good concentration at the end of the day after riding big distances with the excitement of the destination only minutes away.

There were a couple options to return to Argentina.  I would have liked to take the ferry crossing a little south, but it was not clear if and when the boat was going, etc.  Instead I rode around Volcano Lanin which afforded me great views of it for at least 50 or 60km.  Unfortunately this route had a dirt section, 10km on each side of the border which was probably one of the toughest spots of the trip.  Big gravel!  Pucon to Curarrehue C6R7T1V8 great sweeps in the forested area.  Ah crap!  Curarrehue to the border I had to drop the tyre pressure to under 20psi to help navigate the huge rocks beneath me like riding in a rocky dried up riverbed (worked well!) C8R2/3T1V8.


Riding pavement to the Chilean border before the gravel began.   The gravel section took all my focus so I have no video and few photos. 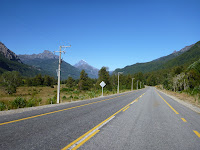 Border.  Chile = 3 min to hand aduana and get my passport stamped out.  Argentina = Urgh!  35 min due to about a 10 person line.  Great views of Volcano Lanin from this border post.  Only 5 km down the road I was stopped by a check point.  Not the usual checkpoint.  Apparently two Chilean fugitives were on the loose in the area so I needed to take my helmet off and verify my identity.

Back in Argentina and a little excited.

After the fugitive check point and the last 12 km of gravel it was magic.  Border to hwy 234 C3R7T1V8. Junin de los Andes to San Martin C3/4R7T3V8, then 45km of extremely dusty small gravel and the last 80km on rp 231 and RN40 riding beside lakes and lakes and lakes including Lake Nahuel Huapi all the way to Bariloche C5/6R7T3V8/9 ("The Road of the Seven Lakes").


Video just out of San Martin.  Lots of cyclists on this section of hwy 234 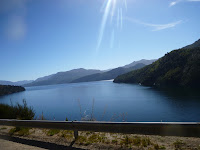 Bariloche = beautiful, touristy and expensive.  Set on Lake Nahuel Haupi in a mountainess setting it's really a place to see, but unfortunately it comes with a cost.  I believe I was there in low season, but it was still pricey.  I stayed at Punto Sur which lacks, but has friendly staff and is the cheapest in town.  Bariloche has a very Swiss Alp feel and boasts many chocolate shops and good restaurants.  It's a tourist destination and a definite stop on your way South in Argentina.

Civico Square in Bariloche where they were building the world`s largest Easter Egg. 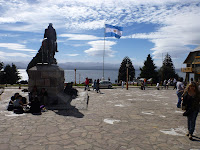 Due North. At this point in the trip I was feeling road wary and happy to begin making my way to Buenos Aires for a rest, warmer weather and the company of friends I had made on the way down.  Basically I had been travelling south for over 5 months straight, wow.

Midday out of Bariloche and through some pretty gusty sections to begin the ride and that continued for most of the day.  Ruta 40 to Ruta 237 was amazing C5/6R7T1V8/9 great fall colours, valley and river riding.  Ruta 237 started with a couple curves and then 300km straight C1R7/8T2V6/7 views of Rio Limay between dust storms.


In to Neuquen which must win the award for most traffic lights on a hwy bypass.  Made my way eventually to Punto Patagonica owned by the lovely Mara.  Good thing a friendly neighbour from the community where the hostel used to be let me know the new location (change your website Mara!)  Good to meet the Marco family and thanks for the pizza!

RECOMMEND: Isidoro for lunch and friendly service, Punto Patagonica for a sleep and all you can eat breaky.

A good sleep and good breaky and I was back to straight riding all the way to San Luis which turned out to be a pretty good little town.  Neuquen to hwy 151 C0/1R7T1-4V5/7 prairie with the odd oil well.  Hwy 143 to General Alvear C1R7T1V6 a sprinkle of trees.  Ruta 146 to San Luis was much of the same for the rest of the day C1R6T2V5/6 with a HUGE MILESTONE as the bike clocked 50,000km!  Congrats Bumble Bee.

Celebrating 50,000km, a true appreciation of what happens to the mind of a solo rider. 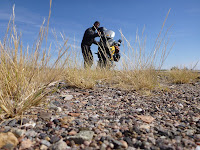 San Luis, I found the only hostel in town that I knew of and hoped for the best as I had to park the bike on the street over night.  Only two big dorms, one for girls and one for guys, but the place was good and there were only 12 of us total so space enough for everyone.  I expected to have a quiet night as I enjoyed my roast chicken and a bottle of wine while I watched "Sons of Anarchy".  Then Karl and the rest of the Norwegians invited me for a drink.  Why not?  6am return...


RECOMMEND: Finding some Norwegians to drink with at a local Karaoke bar in San Luis!

Sort of a variety of talking, joke telling and karaoke.  Here's a video of some singing if you like... 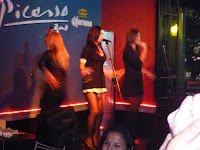 Next up - Central Argentina...and some gun play?

Great pics man! Thanks for the good blog :)