No rush and thank god because I only had 4 hours of sleep.   A short couple hours to Villa de Merlo was the plan and if I couldn't find a spot there I was going to continue to Cordoba where I hadn't been able to find a spot online for the Easter weekend at this point.  With the idea in my mind to ride only 200km I debated sleeping under a few trees along the way as there was a lot of nice scenery especially when I enter the region surrounding Villa de Merlo.

Ruta 20 for 100km C2/3R7T0/1V8 farmland, autumn reds and yellows and distance mountains.  Missed my turn to Merlo and took a 15km tour south and back in to Province Cordoba.  Then on to Rp 1 to Merlo C3R6/7T2/3V7 river valley feel as you skirt the mountain range to the east.  I could tell it was a heavily visited area by the large amount of signs boasting about their accommodation along this lovely route.

Of course Villa de Merlo is expensive, especially during Easter.  Dorm beds for $18 USD!  Forget that.  I was thinking of continuing on my way when I got a nice piece of advice from a local bakery pertaining to a couple cheaper places as you head up the hill away from the main drag.  Done, I found Ricardo's house, an illegally rented couple of private rooms out the back of his place for $20 USD/night.  This is the beauty of having your own transportation as you have the ability to search around a bit.  It's like a little treasure hunt where you find a nice place to lay your head at the end of it.

Villa de Merlo is good in my eyes.  It's quiet and small which was good for me before I made my way in to Cordoba a city of at least 1 million people.  It's got everything I need with a nice slow pace and amazing sunsets from up in the surrounding mountains!  Sure there's a casino as the main spot, but it's more of a flash community hall with a beautiful fountain in front so it's all good.

RECOMMEND: Ricardo's house (don't tell the authorities), William and the Monkey Irish pub for friendly service (not fast service).
DON'T RECOMMEND: Getting gas (huge lines) or money (bank machines out of money, all 3 of them all weekend) 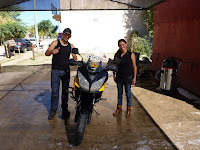 Incredible Sunset viewing locations.  Only problem was which one to pick. 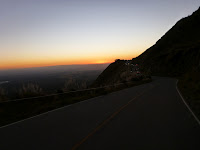 Getting close to Buenos Aires, but first a stop in Cordoba one of the main cities in Argentina.  Great day for riding and only 200km so there was no hurry.  Good bye to Ricardo and his Galga which was like saying goodbye to your grandfather and his faithful companion.  A rough start to the day trying to get gas in Merlo with a 25 car line I decided to try my luck down the road which turned out to be a good move.  In La Paz, a small hamlet 3 minutes down the road, I waited 5 minutes at most and I was then on my way down Ruta 20 C5/6R6/7T5V7 full of towns!  I had a very bad lunch stop at one the many road side cafes where a guy stands out front waving you down with an Argentinian flag or something comparable.  Awful deep fried empanadas for way too much money ($7 for 2 and a coke).


After my quick lunch stop it was up in to the mountains and over and down the other side all on Ruta 20 C8R7T3V7 twisty and smooth with Easter traffic.  Once out of the mountains you are basically in Cordoba in about 15 minutes on flat and straight highway. 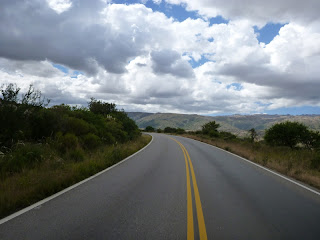 Climbing to the top on Ruta 20 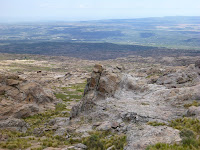 Descending towards Cordoba on Ruta 20 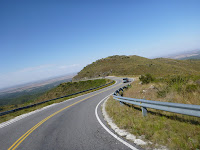 Cordoba (Not like the 1970's crappy Chrysler car).  A similar size to Mendoza with a similar feel this place didn't look great when I arrived, but once I got settled in to the sweet hotel Savannah (great online deal) I found spots to enjoy.  Although I didn't see why Cordoba was so great initially as the 3 days passed by I realised how liveable a city it is with nice parks, buildings and a good student culture.  Really just a solid 1 million person city in a central location to most things in Argentina.

RECOMMEND: Bar Maria, Maria, Hotel Savannah (if you get a deal), Parrilla de Raul est. 1906 for cheap BBQ (don't get the intestines!)

DON'T RECOMMEND: Paying for parking ($5/10hrs for a bike with a discount), Seaweed filled empanadas, yuck!


And now the shenanigans...no one was hurt during the filming of these stunts performed by professionals. 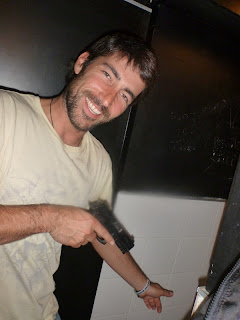 Last supper in Cordoba at the famous Parrilla de Raul est. 1906.  If my spanish was better I could have substituted the intestines for something else.  I tried to eat them all. 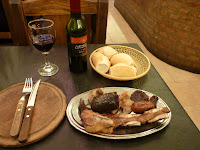 My final stop before Buenos Aires and a 3 week rest was Rosario know for the most beautiful women in Argentina and the home of Lionel Messi.  Let`s go!

Stuffed myself with toast, ham and medio lunas at Hotel Savannah then hit the road.  Highway 9 all the way unless you blow through a toll booth, freak yourself out and get on the secondary highway for a couple 100kms, which may be what happened to me.  Oops.  The only difference between the two parallel roads is of course the secondary one hits the towns and is a bit slower which was fine for me as my back tire was starting to wear down and speed only makes it worse.  Little towns and farmland all the way C1R6/7T2V6. 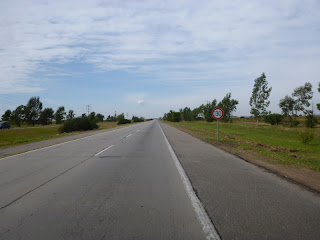 Rosario.  Nice 1 million people town with a great boardwalk along the river.  Like Cordoba parking was at a premium so I put the bike on the street for the night in front of Rosario Inn a well set up hostel overlooking the Fountain of the Utopias.  Not much to report from Rosario as I just had the one night on a Wednesday that didn't seem to be the night to go out.  A weekend in Rosario would be a good idea as there is a lot of city I didn't see.

RECOMMEND: Hostel Rosario Inn, Trato Mundo for a cheap bite to eat, walking along the boardwalk around 6pm.

I cant wait til you make it to B.A.! I hope you took a tango lesson there, it was well worth it!