Sure I had made it to Argentina which was my goal, but I still had to see Chile and continue to Buenos Aires where I would deal with the bike and helpfully learn a lot more Spanish.  I had a couple must sees in Chile before going back to Argentina, Valparaiso and Santiago and then a couple stops which I found along my path, Concepcion and Pucon.

What an amazing cross "Paso de Los Libertadores" C6R6/7T2V8/9 simply put - passing through the Andes!    Truly the only crap part of the day was waiting in line at the border which should really be faster considering it is the most used, but I get the feeling neither country wants people go to the enemy.  There is just one building where you do it all so it should be easy and will be next time I'm sure now that I know what I'm doing.  Station 1 - Migration Argentina, 2 - Migration Chile, 3 - Aduana Argentina, 4 - Aduana Chile, but there may have been multiple stations and 2 sides of them for each direction.  Like I said it's easy enough, but it felt more like crossing a Central American border do to the lack of helpful info I had.  Sign of a confusing border crossing = my Aduana for Chile had 5 separate stamps on it which normally would be 1 or 2.

Nice Side Note: Met 4 New Zealanders who had rented bikes in Chile and were finishing up their trip telling me how much better it would have been to bring their own and how cool my trip was.  Of course with less spanish they were more confused than me at the border, but if you stand around looking lost enough eventually some one sends you in the right direction.

Getting very close to the Chilean border. 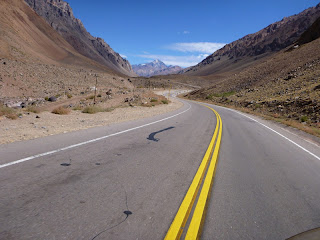 Sweet tunnel riding and out the other side 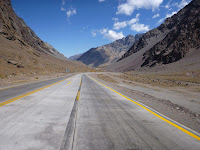 In to Chile and 150km to Valparaiso.  Border to Los Andes was great C7/8R7T3V8 coming down from the pass = curves and views.  Welcome to Europe or the closest thing to it in Latin America.  Hints of Switzerland were definitely crossing my eyes and the road signs also had a European flavour.  Los Andes to Valparaiso C3R8T2V7 urgh, loss of curves and mostly tolls to finish the day.  TOLLS for motorbikes ($1 / 25km).


Valparaiso.  A hillside coastal town that I expected more out of, but that could have been my fault especially considering I never made my way over to the more expensive neighbouring town Vina del Mar.  Still all and all Valparaiso has a good central area and some good restaurants, but don't expect it to have the late starts like Argentina.  At this point I definitely got the impression Chile was the more conservative of the two countries.  Very friendly people though.

Nice Side Note 2: Another reunion with the famous Conor Maloney that I had continued to run into through South America.  Always a pleasant situation and a good chap to have a chat and 2 or 3 bottles of wine with.

RECOMMEND: Villa Kunterbunt if you don't mind dogs peeing on your tires constantly.  Note this place is not great for location, but very biker friendly and quite comfortable once you settle in, oh and only takes bikers.

Front brake with Conor and Junior 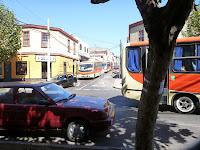 
An easy short ride to Santiago going from 14C to 24C, C4R8T2/3V7/8 dry and hot with a couple road tolls $1/50km.  Entering the city I was pleasantly surprised cruising to my Hostel Ventana Sur in minimal traffic just before rush hour in a city of 4.5 million that felt like 1/2 million.  Nice Hostel.  A great spot with a little swimming pool and tonnes of friendly people.  Santiago definitely felt like a good place to hang your hat for a while.  Friends, Maria de LA and Fran, that I made in Colombia who live in Santiago took me to "Parque Metropolitano de Santiago" for some excellent views where you can see that the city is 4.5 million.

While in Santiago I found out an American was looking for a motorbike so I tried to contact him and decided to stay an extra night in hopes of meeting up.  Unfortunately Lollapalooza was in town so accommodation was tough to find and this meant I had to move on to another hostel.  Why not try another part of town.  I found a lovely hostel Newen Kara in a posh part of town with an excellent restaurant near by, Liguria, where I had the best steak of the trip (so far).  Santiago is definitely a city you could live in on first impressions.


Walking up to the top

After a nice 3 days in Santiago I was back on the bike in the direction of Pucon (south) where I would flip back over to Argentina.  As Pucon was a fair distance away I decided to pick a spot in between depending on how far I got.  Why not Concepcion the earthquake centre of Chile!

Midday in a bit of traffic getting out of town and then mostly straight toll roads for the majority of the day until I made the turn towards Concepcion.  Santiago to Chillan on Ruta 5 runs between small mountain ranges and is quite straight C1/2R8T4/5V7.  Chillan to Concepcion was good sweeping curves through the mountains layered with a recently devastated forest of burnt trees C6R8T3V9.

The aftermath of a burnt forest.  Rumour has it that a tourist (I won't name countries, but it's not a well liked country and I'm not talking about the USA) who was supposed to pack their toilet paper out with them set it on fire instead.  Very bad when a tourist causes damage, very bad.


Arriving early evening in Concepcion you would never know this place had felt a 7.2 earthquake 2 days ago with the centre only 60km away.  Staying at the slightly pricey Hotel Don Matias which I worked down from $60 to $40/night I did a little blog work and then headed out for dinner and a beer.  I made my way to Plaza Independencia and Bar Choripan where I enjoyed a fantastic cover band! and met some cool girls.  It's not the place that makes the trip, but the people you meet.

The girls were so happy to meet me that I convinced them to put me up for the next night, great.  Since I was staying an extra day it gave me the chance to change my oil (well have my oil changed by the Zappettini crew, see photos).  Thanks guys!  After the great service I settled in at Rossio and Mari place for the night for a nice dinner and a good rest.  Thanks girls!

This singer was just fantastic.  Remember this is shot with a little waterproof camera so the speaker is not doing him justice!  "Hold the Line" by Toto


Encore because I need to show his range!  "Is This Love" by Whitesnake

The last leg in Chile was a stop in Pucon on the way back in to Argentina which is part of the Lakes District and surrounded by mountains and forest.  Just lovely.  Concepcion to Los Angeles (Ruta156/182) had some construction stops and a lot of wind in sections C5/6-3R7T3/2V8/7.  Los Angeles (Ruta 5) to Ruta 199 was boring and the toll bastards got me just before the turn C1/2R8T2V6.  The last section 199 to Pucon was good C4/5R7T3V8 riding beside lakes and towards Volcano Villarrica.


Once in Pucon, I met up with fellow partner in crime Conor Moloney again at the Hostel La Bicyclette which  smelled a little like a log cabin.  Pucon looks to be a ski area in the winter and a hiking paradise in the summer.  We had a good meal and an early night with not much going on.  This was also the day we got the sad news of Kevin's death which took us out of ourselves and into our minds.

Pucon is a nice spot and more time could definitely be spent there, but Argentina was too close for me to stay more than a day.

Next, back to Argentina and the gorgeous Bariloche...


Costa Crackers!  A good giggle from this video.

Loving the blog man! Keep it coming... what an awesome adventure you had!