Boat time!  Up very early to make it to the ferry from Buenos Aires to Colonia, Uruguay with a new plan to head up to Paraguay and possibly sell the bike.  I found out after a good search that it is impossible to sell a foreign bike or car in Argentina due to their government restriction which similarly apply in Chile, Brazil and Uruguay.  But not Paraguay.

Stupid Side Story: On the way to the boat in reasonable traffic about 30m ahead of me while a parked car sat in the lane where it shouldn't have the driver of the car directly in front of me proceed to climb the back of the parked car in a fantastic crash scene.  It was like a minature BigFoot exhibition and I had a front row seat.  My only disappointment was I didn't get any photos as the traffic was too thick and I was more concerned about leaving my now blocked lane.  It was very surreal that's for sure.  A good lesson to the guy who didn't read the parking sign and just did what he wanted parking there in rush hour, stupid.

Once at the ferry terminal it all went pretty smooth even though I only had about 20 minutes until the boat departed.  Thank god it was during the week and in the off season or I wouldn't have made it.  I hadn't even purchases a ticket ahead of time so when I arrived I had to do it all (safe play considering they do not give refunds or transfers if you miss your scheduled boat.  That's crazy!).


Steps of Departure: 1) Go to ticket booking counter and book ticket 2) Next line to pay for the ticket 3) Return to ticket booking counter and complete registration 4) Upstairs to security gate 5) Arg passport stamp out 6) side step to Uruguay passport stamp in 7) Hand over Arg aduana 8) get the bike on the boat! 9) Complete Uruguay aduana when you arrive.  Total time 15-20 minutes for all steps when it's not busy.

Three hours across the brown river between the two countries and I was back on the road after 3 weeks relaxing.  It was good to be back in the saddle even though it was a bit of a shock to the system.  A very casual and friendly bike import ceremony as I passed through the pond like car wash when you first disembark on to the new land.  A quick sign off and "loose" inspection and I was in Colonia with permission to have my bike in Uruguay for up to one year (a good country to leave your bike if you need to return home and then come back later).  I definitely felt Uruguay (3,000,000 peeps)  and Argentina (45,000,000 peeps) had a similar comparison to Canada and the USA on many levels.

I took a quick spin around town seeing tourists faces from the boat probably here to do a visa recharge for another 90 days and then head back to BA later in the day.  A nice, but pricey lunch at Lentas Maravillas with the best olives I have ever had in my life (I asked, they are from Argentina, yes!).  A nice little town with friendly people, many of who speak English.

Up top on the Ferry crossing to Colonia, Uruguay.

After lunch it was on to Montevideo a city I expected to really like considering it has only 1 million people and beach front everywhere!  Nice highway if you don't need curves C1R7T1V6, all farm and ranch land.  Check out the little wasp type thing my shoulder ran into.

Montevideo.  In a nutshell, location, location, location.  Very nice beach with blue ocean rolling in and the people couldn't be more friendly.  As I came in to town I heard this rhythmic metallic click coming from my back tire so I stopped in a free parking spot in front a random shop.  As I inspected the back people from the shop gathered around the bike and I with great interested.  While inspecting my tire I asked them if I was close to the address on my page.  The girl ran in to the shop and returned minutes later just as I found a good size screw in my tire (no air leaking so why pull it out, haha).  She produced a couple of google map print outs, slowly walked through the route with me and wished me luck on my trip.  Wow is all I can say.

After checking out a bunch of hostels I ended up where I started which was recommended to me by Gui intially, but only had dorm beds left.  Oh well, they had great parking so I parked up for the night checking my rear tire as I unpacked.  Bonus!  The screw had dislodged on its own and did not go all the way through.  Lucky Brad (It would have been fine for the screw to pop the tire as it only had 800 km left on it any way).

A long story short I can't say enough good things about MVD and Unplugged Hostel who had chef Felipe that made economical filling meals every night.  A good town and a good party hostel as everyone gets socail while eating communally and then went to the nearby pubs and bars. 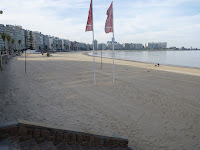 A short ride with a good hangover, we've heard this story before.  It was down the road to the most Eastern point of my entire trip where all the stars hang out in the summer (this was not peak season).  A straight shot with a foggy entry in to Punta del Este where I would once again met up with Conor.  We both made our way to The Trip Hostel, another Gui recommendation who was now 4 days ahead of us on our way to Puerto Iguazu and was finding a couple good spots for us in his travels.  Unfortunately due to the fact that a lot of hostels and hotels were closed in the off season The Trip was quite full so we all crammed in to a 12 person dorm after Conor and I returned from dinner at Parrilla Milano.  See the photos for more...

A stop at the first signs of beach as Punta del Este appeared through the fog. 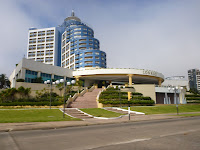 And like that it was my last day in Uruguay, damn.  I did like it here, but unfortunately I had to make my way up to Puerto Iguazu.

My last night would be in Salto at the Northwest section of the country 5km from one of the Uruguay/ Argentina borders.  With a couple different possible routes early on the trip the GPS had to be watched against my map so I didn't end up taking the long way, but also didn't end up taking dirt the whole way.  Ruta 9 and 8 C2/3R7T1V6/7 farming and ranching.  Ruta 11 was more of the same C2/3R7T1V6/7.  Ruta 3 to Rio Negro C3R5T2V7 deep red crops a bit rougher road from heavy truck traffic and then continuing up to Salto more farm animals with an increase of forestry C3R7T2V7.

As I entered Salto I caught the sunset over the west side outskirts of the city then proceeded to find a hotel.  After a good chat with two older ladies who were determined to teach me more Spanish they sent me in the right direction of Hotel Danaly where I grabbed a double with bathroom for $20.  Good parking too.  Although I didn't get to see much of Salto or get out to the bars I did head to the Dayman Thermal pools which was good valve and quite enjoyable. I would say this town deserves 2 or 3 days, sorry Salto.

DON'T RECOMMEND: Eating a sandwich from the shop next door to Hotel Danaly or maybe the Canadian from 2000 Pizzeria = some where I got a stomach bug.


A tour of Hotel Danaly 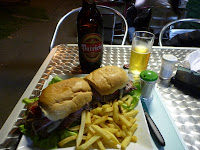 Next up, back to Argentina and up to Port Iguazu...