The last big destination on this trip was Puerto Iguazu and I would end up living there for a couple weeks as I enjoyed the Cataratas Moto 2012, the Iguazu Falls and the joys of organizing a possible bike sale.

Firstly though, I had to get up and go from San Ignacio which was harder than I thought after tasting their home-made banana jam!  I think I ate 10 pieces of toast just to consume as much jam as I could.  Wow...

An easy 250km passing some towns on the way to Puerto Iguazu where I would meet up with my Buenos Aires flatmate, Gui, one last time before he headed North towards Colombia and I returned South to BA for another month to live before returning to Canada.

And then I was in Puerto Iguazu...for the next 2 and a half weeks.  A great little town with beautiful river views, solid restaurant choices and good people.  This place felt like 5000 people, but is actually 80,000.  Puerto Iguazu makes up one of the triple frontier cities, the others being Foz de Iguazu, Brazil and Cuidad del Este, Paraguay and is the best of the three to stay in, especially if you can't get a 90 day Brazilian Visa even though your passport has 5 months left on it (passport needs to be valid for 6 months, dumb, but this is a rule in most countries they just don't enforce it.  Argentina, Chile, Uruguay, etc.).

I scouted around for a hostel while I awaited the arrival of my good friend Gui.  After a few looks I decided on Hostel Sweet Hostel which had a good set up for 2 people and a great breakfast with bike parking.  Unfortunately after a few days we released the management was a bit dodgy so moved on to Peter Pan's for another couple nights until Gui made his way North through Brazil back to Colombia.  During our last days together we welcomed Conor who I set up in Residencia Los Rios (a good value hotel closer to the main streets), took in the Motor Bike Rally and went to Iguazu Falls.

A few keen bikers showed up the night before the rally.  We ran across Osvaldo's and his crazy bike set up after dinner.  I can't wait to be old enough to drive a gold Wing!

Friday night at the Rally.  I parked my bike amongst the rest on the street with a "For Sale" sign on it.  No bites though.


A break from the Night Rallies with a visit to the FALLS.

These falls are tiny... 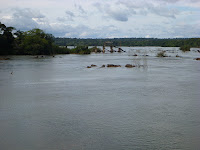 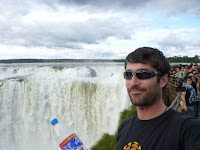 Later we made our way to San Martin Island which is surrounded by falls.


San Martin Island in amongst the falls and rainbows. 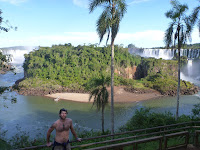 Side Story: After we saw most of the Falls we ran across these little coatimundis who seemed safe enough.  Safe enough, until we bought some snacks that is.  Damn little bastards closed in on me while I was under the impression I was getting a great close up and then they jumped on the table and ran off with my chocolate almonds.  Bastards!  I chased them in to the forest hurdling a fence to the enjoyment of the crowd, but they were too fast.  Crazy.  As I got to their pile up they had already finished the box and it's contents.  Walking back to the table I simply held my arms out shrugging my shoulders.  I think everyone felt for me, but no one offered any chocolate almonds.  I was so looking forward to them too.


Back to the big city for a bit more Rally... 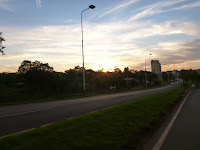 Saturday night at the Rally.  A bit more packed. 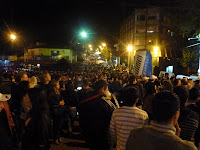 When Gui set off to Brazil the next day I left Peter Pan's and moved to Residencia Los Rios (for my own room at $22/night) where Conor and I began our plan to sell the bikes in Paraguay or really anywhere we could.  We were looking to get a little more than we paid for our bikes in North America as the price for a new, register bike is 3 times that in most of Latin America.  The problem is out of Argentina, Brazil and Paraguay only Paraguay allows foreign bike sales and they have the least amount of money, but that was the plan regardless.

Over the 2 weeks Conor put in a bit more work to our plan than I did since he could speak spanish and portugese and had a visa for Brazil, which we thought you needed to pass through to get to Paraguay.  Thank you for your efforts.  On one particular day when Conor had arranged buyers I did manage to sneak  in to both countries as the borders were quite loose based on Conor's experience.  I simply rode until I got stopped, which never happened.  It was nice to set tire in both countries considering I thought I never would on this trip.  The 2 weeks passed and the only offer we received was a bit under what we were asking.  If I wasn't returning to Argentina again in November I would have taken the low offer.  So, that was it in a nutshell for selling the bikes.

I decided to ride back to Buenos Aires and Conor decided to stuck it out for another couple weeks trying to make a deal (read his blog to see what happened, you'll find the link on the right side of my page, 1 man, 2 wheels, 3 Americas).

Los Rios, a great little spot to live for 2 weeks.  Yes I even got excited about the hangers in the closest.  That's what happens after 6/7 months on the road.


Off to Brazil/ Paraguay to sell the bikes, fingers crossed

Food shots over the 2 week stay 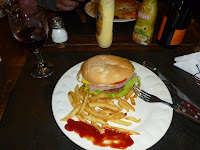 My final party night out in Puerto Iguazu was a boozy night at "La Barrancas" which was all you could drink for $20USD.  I went there thinking I would practice my spanish with people, but that was not the case as everyone was from Foz de Iguazu, Brazil jumping the border for the cheaper drinks, etc.  So, I learned a few words in Portuguese instead. 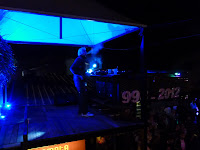 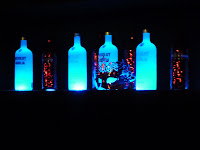 Interview with Priscila a Brazilian who took the 10 min cab ride from Foz, Brazil to Puerto Iguazu, Arg for the party.  She shows her disappointment that Conor was unable to join us at La Barrancas


Last night: A quick tune up of the bike before making my way South to Buenos Aires again.  After Conor and I had a really tasty last supper at the highly recommended La Vaca.

NOT RECOMMENDED: Hostel Sweet Hostel, Peter Pan Hostel (way too many other choices in town to be stuck with these two)

NEXT - getting back to BA.

Pressured water, why don't we have tonnes of this in Canada.  Healthier than pop and way more fun. 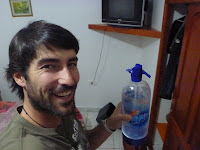