Made my way out of Puerto Iguazu and started chasing clouds south.  This would be the last of the warm weather and that was a little sad, but on the other hand I was pretty excited to get back to Buenos Aires to take in the city for a month.

Side Note: I surpassed 30,000km of highway driving for the trip which meant I had more than 30,000km in total before this day, but that included driving around towns.  This 30,700km was all point A to B driving between locations which might give you an idea of the distance covered purely from point to point to point and so on.  Does that make sense?

Not too much happened on the route this day.  I basically rode until I found a good spot.  Posadas was too big and too close to Puerto Iguazu so I kept going (RN12 C2R6T2/3V7).  I was back on RN14 the rest of the day (C0/1R5/7T4V5/6) and really wasn't sure where I would up, but felt maybe Concordia was a good idea.  I filled for gas about 40 min from Concordia and when I asked the attendant about staying there he said "Muy Peligrosa" (very dangerous), which it could very well have been so I didn't chance it.  Instead I took his advice to go to Federacion a smaller tourist town.  A very good choice.


Sun setting on RN 14 as I closed on Federacion, Arg. 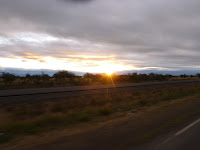 Federacion is a major tourist town on the banks of the Uruguay River.  This being low season it wasn't too busy and had lots of higher end accommodation to choose from for reasonable prices.  I stopped in to ask for directions to a good economical place and a local patron said "Follow me".   Nestor, a mid 50s fella on his scooter zoomed me around town until we ended up at a few choices eventually settling in to Diego and Gabriella's Residencia del Norte for the night.  A great little spot.  Unfortunately, it was one of the longer riding days of the trip so I was happy just to relax in my room for the night.

A slow start was no problem with my hosts as we tried to work out where I would get US dollars for my rent in Buenos Aires.  The answer, not Argentina, but Uruguay which luckily was right next door.  Diego helped me out and called the right bank in Salto, Uruguay that had lots of USD.

Side note: Even though most rental properties in Buenos Aires expect rent in USD currently the Argentinian government does not let anyone take USD out of the bank since about 4 months ago unless you have permission from the government.  Seems Crazy and yes it is Crazy!  There's even a black market for trading USD at much higher rates.  The things you see when you travel.

So, it was off to Salto to grab some cash and then back across the bridge in to Argentina at the Paysandu border where I would stop in Colon, Arg for the night.  The majority of the roads today were all the same as the way up so no new ratings were recorded.

At the bank talking about USD issues

Don't take photos in or at the front of banks:  I know it sounds stupid, but for me I really wanted a photo inside the bank to show everyone the big line ups in South America.  I would have gotten away with it too if my auto flash didn't go off.  I took a quick snap and the two police working as bank security turned to each other with a look of disbelief and annoyance and then approached me.  Of course I said I didn't take a photo and for some reason I gave them my passport when asked (this wasn't a dodgy police stop on a desert highway in Peru).  I casually went to the bank machine and pulled out my money while they held my passport at the front doors of the bank.  I was so happy to get USD.  Even though I was ready to go they stalled me waiting for their commanding officer by continuing to ask me in I took a photo.  After about 15 minutes of standing around 4 police or more, a bank manager and finally their commanding officer had assembled.  At that point as I stood in front of the bank like a criminal with my camera in hand I decided it was better to delete the photo as it seemed to be getting a bit serious.  Too bad I deleted it because after all the waiting around and commotion no one ever did force the camera from me.  The commander came over, asked me where I was staying (I lied and said the place I stayed on the way through before) and then he handed me my passport and said enjoy your stay in a friendly demeanour.


After my bank situation I wasted little time getting out of Salto.  A quick stop to use Wifi from my road office at a gas station to figure out my final destination for the day aimed me at Colon, Arg just on the other side of Paysandu, Uruguay.  Love the wifi at gas stations.


Heading over the Paysandu bridge back to Argentina was a bit disappointing as you had to pay $2.  Go the Salto bridge if you have a choice as it is better and free.  Oh well, an experience. 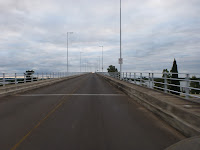 I arrived in Colon around 5pm and was starving so I hit the water front and grabbed a couple empanadas hoping to find a tip or two on where to stay.  The girls tried to be helpful at the little waterfront cafe, but really didn't know much about their town as they were not from the area and had only come here to work for the tourist peso.

I found Residencia Artigas for $34 (one of the cheaper options in town), went for a quiet dinner and an early sleep getting excited to get back to BA the next day. 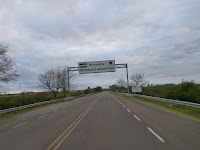 Tight hotel room in Colon the tourist town only 300km from BA. 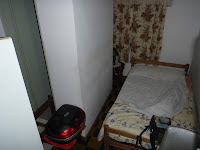 RECOMMEND: The Salto Grande bridge border crossing
NOT RECOMMENDED: Taking a photo any where near a bank!

Up in the morning to see a group congregated along the square with a huge Argentinian flag to celebrate the Day of the First National Government (one of their many independence from Spain holidays).

A short day back to BA and back amongst the the city traffic with out catching any rain, yes.  Ruta 14 to Ruta 9 and in to BA mostly fields and that's about it C1R7T2V5/6.

Zarate bridge turning on to Ruta 9.  Awesome, a bug getting stuck to my camera lens! 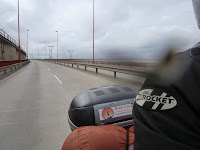 I found my way through the city all the way in to the heart a couple blocks from the Obelisk where I met with the rental company (Argentina4rent.com) who were very thorough and professional.  I chose a place 2 weeks prior online while still in Iguazu so I was a bit nervous how good the photography may have made the place.  It turned out to be really good and what I needed, not big, but well appointed and close to a lot of good areas even though the street front was not desirable.  The owner who was away on business was coincidentally a New Zealander named Aidan which made it all the better.  For $800/month including cleaning service and wifi I was happy to have a place to call my own and finally get off the road...More on this apartment in the next post... 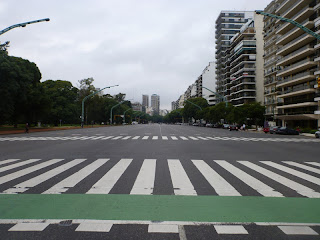 Glad to see another update from you man! I enjoy reading all of them.