In the month of July it was Stampede business as usual in Calgary with a Joe Rogan comedy show and a Slash concert near the end of the month.

Calgary Stampede.  The annual 10 day Rodeo competition that brings in over a million people through the gates and is probably the best time of year to visit Calgary.  Some of the locals may be sick of the festival and big bar set ups around town, but I always find a couple good days to enjoy the scene.  This year was the  100th year of the event which really put it all in prospective.  I even learned about the "Big Four" which were the men who started the event, Patrick Burns, George Lane, A. E. Cross and Archie McLean.  This was a good year with the usual fun, but still nothing has beat Stampede 2009 for me.  http://thelifeofbrad.blogspot.ca/2009/08/july-2009-calgary-stampede.html

Let's begin at Cowboys on the First Friday...that's what everyone else does.

No sound in the video which I think helps me come off a little smarter than usual, haha.  Cowboys as Billy Dog and I go up the stairs and in to the VIP area. 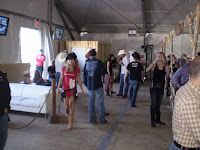 Girls impatient for their bathroom decide to take over ours.  That's Stampede for ya.


Midweek I crashed The Three Streams party prior to going back to work with them in August as an Engineer.  Thanks to my inside connection Pedro...Que pasa? 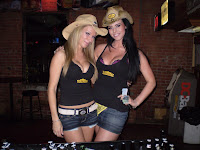 And then there was the Wild Horse which is only a bar during stampede where your cowboy soul goes to die.  Have enough drinks and you can have a good time, but really it is terrible to see all these out of town bartenders and tubbers taking advantage at every chance!


Oh, let's not forget the Stampede Grounds which is the main festival area (and I don't believe I have shown this before on the blog so take a look).

First on top of Scotchman's Hill with Tom A. watching the Chuck Wagon races.


At the grounds with Mr. CK.  It's not all about the beer drinking and two stepping...

Quick video of "Drop of Doom"


Shooting the three plastic cans.  I think you need to change guns. 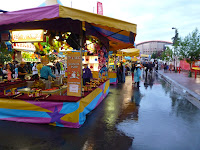 But let's be honest it is a lot about the beer drinking and the two stepping eventually as CK and I found ourselves at Nashville North in the heart of the Stampede Grounds.  Recommend!


A taste of Nashville North 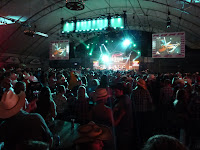 Don't forget the firworks!  Check out my link on Youtube to see a 10 minute firework display I recorded one of the 10 nights of Stampede.  They ran 3 displays of fireworks in 3 corners of the city so everyone could see it from anywhere in Calgary.  http://youtu.be/6HOb64FGJxA

After the dust settled from Stampede the month slowed quite a bit as you would expect.  However, using the power of Kijiji.ca (like ebay or trademe) I found myself getting cheap last minute tickets to a couple of cool shows that I would likely not pay full price for.

UFC was in town in July which meant that Joe Rogan the famous announcer for the Mixed Martial Arts venue had also booked himself to do a little Stand Up Comedy at the Jack Singer the night before.  A funny guy for sure who is well known on Youtube for going after hecklers which was no exception at his Calgary show.  This video someone I know captured ;-) has over 9000 hits on youtube to date.  Check it out.

Joe Rogan Ejects Hecklers (about 10 at once) Calgary 2012


The second and final outing in the month was to see the world famous Slash in concert.  Who's Slash, if you don't know you are likely born before 1965 and / or you never heard of Guns N Roses.  He was the lead guitarist for G N R in the late 80s and early 90s before they broke up.  Slash is still considered one of the best guitarist of all time and continues to play with multiple singers when he isn't headlining his own projects.

Sweet Side story: I hooked up a $200 ticket from Kijiji for $50.  My buddies, Chad, Dave and Ajax were already going so I met them before at a bar and then we walked up to the concert together.  Unfortunately on the way in the guy who was meeting me with his ticket texted that he sold it for more to someone at the door.  Bastard!

Since my friends were connected with VIP tickets because they know Slash they told me to follow them in and the plan was to work something out.  Looking back it seemed childish, but when Dave said, "Brad, don't you have to pee?" as they stood in line to get their tickets passed security I took off and walked in to the show as Slash's band had just begun.

Note: I happily would have bought the kijiji ticket, but when that opportunity slipped away I went as far forward as I could until my path was holted.  The road block finally came when the show was over and the boys went back stage with their passes.  Unfortunately they did not get to meet Slash this time nor did anyone with Back Stage passes as he took off straight away (disappointing for all who paid a pile of money).

Truly a great show and I recommend picking up one of his new albums.  2010 Album of the Year, I believe.

NOT Recommended: An artist that wants to perform in Calgary, Don't go to the Jubilee!  They do not even allow water inside!!!  A Thirsty 2+ hours for sure.