Movember - the month where men grow moustaches in order to raise funds for Prostate Cancer occurring in 1 out of 5 men which is very preventable.  Also in the month I finally got to go on a Police Observation Ride-A-Long and had my first trip to Denver to see my favourite NFL team the Denver Broncos.

Movember.  This year I decided to go for a more classic Mo which I like to call the "Tom Selleck" (Also it should be noted that I am with in 2 degrees of Tom as my ex-girlfriend used to give him massages when he came to Calgary so perhaps it was a secret honour for me to wear the Selleck).  Enjoy some of the photos as the month progressed and I should mention I raised money as part of the TSE team recieving $500 in donations putting me in #1 on the team.  That's cool and special thanks to Billy Dog for his huge donation.


Police Ride-A-Long.  I believe when I was about 8 or 9 I got to go on a sort of Ride-A-Long with the cops after winning a classroom contest.  Since my memory is bad I thought I should probably go again, ya!  A good friend of mine Chris has a cousin, Steve, who just became a cop after being a Per-medic for years.  He took Chris during this summer and the stories were so good I had to sign up.  The fact that Steve works in the worst area in Calgary "Forestlawn" added to the excitement and hope of great action.

I made my way to Steve's office in the East of Calgary after working all day and got my observer jacket and a radio.  I expected to meet his partner, but it turned out that I was going to be the partner.  Oh man, the stakes just went up, yikes. We signed out a car, Steve's gun and a couple other pieces (Radar gun we picked up later) and it was on to the street to see what was going on.  Starting at 4pm we had to deal with a bit of rush hour so it was a slow go at first.  After that our mission was to serve a Restraining Order to some scum who hits his girlfriend all the while running plates on vehicles to see if any of them are stolen or the driver has some outstanding fine, etc.  A nice routine start to the night.

The shift would run from 4pm until 4am and remember I was also working that day from 8 until 4 so it was a big day, but I was so into it I didn't mind at all.  To sum it up with out giving too many classified details it was a little quiet this night, but we did have to break up a fight at a house that involved a machete and a sword.  It sounds a lot worse then it was and I think the 6 cars that showed up to the call were all hoping for some more action too.

The night went on and we set a couple radar traps for speeders after a lunch stop at Boston Pizza (the usual hangout the Police from what I've seen over the years).  Over the whole shift my eyes really opened up seeing what an officer goes through and the monotony of society they have to deal with on a daily basis.  I definitely have a new respect for the Police and understand a little more why they have to do some of the less fun jobs too.

In the end I really enjoyed the experience and look forward to going again and may be even becoming a cop???  Thanks Steve for showing me the ropes!

At the Machete Call.  I stayed in the car until the scene was established.  After that I even got to go in the house as we talked to all the combatants and witnesses (this was strange as everyone thought I was a cop too, especially with my dirty moustache!).  If I was a cop I would be a moustached cop that's for sure. 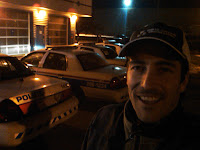 NFL in Denver.  Go Broncos!  At the end of the month it was off to Denver (via Phoenix which is actually 1 hr south, but the flights are 25% cheaper than a direct so what do you do, urgh).  Being considered Calgary's (1000m) sister city due to it's elevation (1600m) I had always been curious to see this place.  Plus falling in love with their football team at the age of 12 until now made this a can't miss opportunity when my brother presented my mother and I with 2 tickets for a Broncos game.  Thanks Derek.

We arrived on the Friday night, hit an Irish pub like in every city and got to bed readying for a walk around the next day.  Staying in the downtown area is definitely the way to go if you have only a few days considering the airport is 35km out of the city and Denver is quite spread out it is nice to have a good centre.  On Saturday we hit the streets and strolled down the 2 mile (3.2km) 16th Street pedestrian mall beginning at our hotel (Sheraton) and the Capital buildings.  Shopping, bars, events and even ice skating skirt 16 st which also has a free bus running the length of it.  Compared to Calgary I would say Denver is much more walking friendly and a really good spot to visit.  They used common sense putting all the sports stadiums in the core as well.  A perfect set up for the weekend sports fan enabling you to walk to a Baseball, Basket Ball, Football and Hockey game all from your downtown location.  Get a clue Calgary!

Union Station and a little chat about Movember and the USA.

German Festival which we stumbled upon on 16 Street.  Good draft beer. 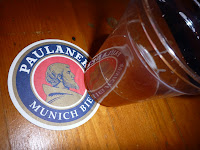 Parade of Lights on Saturday night.

A little look around the bars after mom and I had a bite at John Elway's restaurant and she went back to the hotel.  Great grouping of bars and friendly people.


Gameday: Denver Broncos vs Tampa Bay Buccaneers.  For years I thought about going to a Broncos NFL Football game and after we went to the New York Jets last year my brother thought mom and I should go again considering her favourite player, Peyton Manning, was now on my favourite team after returning from injury and multiple surgeries missing an entire year.  With Peyton the Broncos are now considered serious contenders for a Super Bowl this year or next.

The tailgating before the game was massive (BBQs and drinking in the parking lot which is much cheaper than inside of course, but a lot of work to set up).  Unfortunately my hangover did not encourage me to crash someone's private tailgate and we decided to maximize the enjoyment of our great seats instead.  Great to see Elway on the side lines and some of the stars taking care of the fans between the warm up and the game.  Info: John Elway was the teams' great quarterback in the 80's and 90's who is now part of their management.  He's a big deal in Denver especially after winning two Super Bowls and moving on to own car dealerships and restaurants around the town after he hung up his cleats.

The national anthem was followed by the fly-by of 2 jets over head which is excellent.  Then the game commenced.  A slow start for the Broncos as usual, but let's just say in the end the team did not disappoint nor did our fantastic 4 row seats.  Great, to be able to see the faces of the entire Denver sideline.


Before going in to the stadium.  Incredible amount of tailgating!


Champ Bailey one of the high profile players for Denver enters last for the Defence. 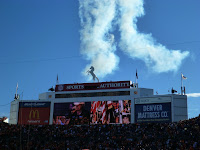 The smallest and one of the most dangerous players in the NFL, Trindon Holiday returning a punt.

RECOMMEND: Getting a ticket for a tailgate and a Broncos game, staying in the Denver centre and going out for a beer on a Saturday night.  Maggiano's restaurant.

A few shots from the air plane heading back to Canada.


Next month back to Argentina...

Glad you had a good time man... seems you enjoyed America! Hope all is well with you....