Always in September and in my interest is the Calgary Corporate Challenge.  Basically, a Corporate Olympics which puts some good athletes and some not so good athletes together to compete in 20 or so events from Truck Pulls to Crib Tournaments (whoa). This year TSE put a cap of 3 on the number of events you could participate in so I chose my favourites; V-ball, Foosball and Bocce.  This year the company had grown over 500 people so we moved in to the Red Division (500 to 1000 employees, TSE only 540)

At the Opening Ceremonies in Eau Claire in the City Centre where the Major officially began the games.

Volley Ball - Event 1.  My first event and the one that I chose to captain.  Being the captain for a company team is always difficult when you have to make cuts.  Only 9 spots and 13 people tried out so I had to make some decisions.  In the end we had a good team, but lost by 2 points in the first round of games.  So close!

I couldn't believe how long it took my muscles to recover this year.  I guess riding a bike for 8 months didn't use Volley Ball muscles much.


Foosball - Event 2.  Coming out of retirement once again to hopefully grab the Gold.  Last year's team won Silver in a smaller division so Gold in this bigger division was going to be tough.  This year I was a starter on the team as I finally proved myself worthy.  I know it's funny, but to be fair the Captain didn't want to break up the Gold medal team from a couple years back so I was on the bench last year.

This year we had a few more close calls on our way to the finals.  We also got a little more excited when last years champs (Coke Cola) went down in the Semis.  However, this meant that there was a better team than last year's Gold winner to contend with.

Comic Relief - Hours before I made my way over to the tournament I got an email from my client asking if I was playing that night.  I said yes of course and he proceed to tell me that they had me figured out and I was dead meat.  I asked if my Engineering buddy Steve made the team and he said Steve wasn't good enough.  Oh?  They must be good I thought.  After the first round I was looking to see who was on their team, but they had already lost and left before I had the chance.  Good thrash talk though.

The final was a good.  Only 5 goals per game in a best of three meant no room for error or bad luck between to high level teams.  Normally a regulation game in foosball is 10 goals, but not in this tournament.  To make it 5 is like having a boxing match lasting 5 only rounds or a chess game with half the pieces.  It's just not enough time to figure out your opponent or recovery from lucky goals, which are going to happen in Foos.  I always said "You can get a few lucky goals on me, but you'll never get 10".   They didn't need 10...

The final game was a 3 - 5 loss.  Too be fair the opposition was good, but had we played to 10, Mike and I would have won.  From what I saw at the tourney we were the best team, but in the end I really wasn't disappointed with a Silver.  To soften the blow their front player mentioned that he didn't deserve the win with all the lucky goals.  I quietly agreed in my head and shook hands.  That's how it goes sometimes and I think all 4 of us on the table knew it. 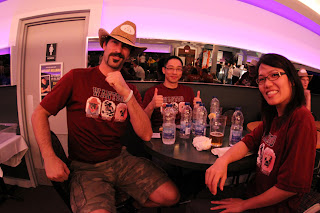 Bocce ball - Event 3.  My favourite in the CCC.  Low impact with a good combination of luck and skill.  I don't know why, but for some weird reason I'm actually really good at it.  May be from my bowling skills or drunken Petanque in NZ.    Bocce is also great for socializing with other companies as you can chat while you play which is a nice bonus.

Well, It was a fun couple of games.  Damn.  See you next year.