December 2012.  The end of the world that never came so let's keep on going shall we.  Now what?

After 4 months hard at work I finished up my contract early in the month and finalized my packing to return to Buenos Aires, Argentina to live for 5 months or so.  On the way I stopped in Toronto on a 4 day lay over to check out a Chilean visa.  While I was there I thought why not see the Hockey Hall of Fame, CN Tower, George Stroumboulopoulos and my first NBA game.

Mid December on my way to Toronto.


I found it incredible that this was my first time visiting Toronto considering I rode a motorbike across Canada in 2005.  During that trip I wasn't too interested in visiting cities over 1 million on my bike which meant Toronto would stay virgin to me in 2005.

Fortunately this time I had an opportunity to visit for 4 days while I was checking out a Chilean work visa, so I made the most of it.  The best part is through good friends and connections I was lucky enough to land a place to stay.  Thanks Tom and of course Neal and the three sisters (Cindy, Sherry, Tracy) who took me in to their nice house in Mississauga.  I will definitely need to return for summer and some pool time!

The Hockey Hall of Fame, a must see for any Canadian kid.  Full of hockey stuff and neat games/ technology.  It was actually very emotional and a I think a place all canadians and hockey fans would appreciate.

Check out the virtual TV control.


The Cathedral room is awesome even though my excitement doesn't show it in the video a guy could spend hours in there.

After an emotional experience touring the Hockey Hall of Fame it was on to the CN Tower for lunch.  The Tower at one point was the highest in the world (553m), but who knows now with all the developments around the world.  As always and as I recommend for all tower visits anywhere in the world (Calgary, Sky, etc) go for lunch which includes all the viewing decks too.  Observation platform only is $25.  At the CN tower it will cost you $55 for a beautiful 4 course meal.  It's well worth it when you consider the view and $25 saved for just the observation deck.

A little bit of Strombo after the CN Tower.  He was a famous Video DJ in the 90s with Much Music, then George went on to work with CBC on his own show the Hour which became GS Tonight.  I would say he is probably one of the most liked canadian presenters these days and I was happy to stop in for a show with featured guest Steve-O the reformed member of Jackass fame.


First NBA basketball game.  Sure it's only the Raptors, but it's still the pros.  Sorry Raptors, try not to suck anymore (When I wrote this the Raptors were last in their division even after a 4 game winning streak).

Neal and I decided we would go to the Friday game if I was able to get last minute tickets for a good price from Kijiji (Buy and Sell site in Canada).  As you may have read in July for the Slash and Joe Rogan shows this is what I did and once again it worked.  I believe the tickets were $180 each normally and we got them for $45 each, but may I remind you there is always a risk when you do this over the internet (you need to trust your fellow man).

We arrived at the Air Canada Centre a touch late due to incredible Friday night traffic on the highway and had to pay a premium for parking ($20!).  We made it in to the game for some of the second quarter and went up to the lounge at the half for a beer ($11.25 for 600ml).  Cheap tickets, but the rest of the cost will get you.  Pro sport games are definitely limited experiences for me due to the cost for a couple hours of entertainment, but worth it once every 35 years, haha.

To top it off The Raptors even won the game against the Dallas Mavericks.  Nice.

A video of what goes on during a commercial break at the NBA game in Toronto.  I love the mascot in the video.  Just watch it!


Back to Buenos Aires.  Neal dropped me off at the Airport and I checked in for my flight back to Argentina.  Before leaving the Canada I bought a couple items that if I didn't use them down South I could easily sell for a small profit due to a high tax system driving the prices up especially in Buenos Aires.  Electronics are definitely more expensive and Apple products are so expensive people don't even buy them (Iphone = $1300 USD).  One thing I debated buying was an Ipod touch, but since I am not an IAnything user I would have bought it purely to sell so I didn't.  Or did I?  As I made my way to my gate I walked past a "Bestbuy" vending machine.  Unbelievable!  It was stocked with all kinds of vending machine size items anywhere between $20 and $500 so I thought I might as well buy an Ipod Touch (exact same price as the mall).  With the profit from this sale I hoped to cover my Argentina visa fee so how could I really say no.


Mid December and on I nabbed myself a great little apartment just east of Palermo (the good spot in BA) with everything I needed to get writing a film idea and to practice Spanish.  Plus an outside temp of 30 C so life was good in December.

Nice stylish apartment I got through a friend I made last time I was in BA. 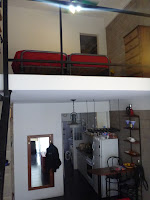 Side Story.  My best friend's brother, Kevin, wife Gaby (Argentina) and kids visit his mother-in-law every Christmas.  They invited me out to Pilar (a relaxed suburb of BA) where Graciela lives in a closed community (24 hour security gates, very common in Latin America) for a visit, a swim in the nice pool and lots of food.  Good fun and great relief from the 30+ C.

Second Side Story.  My flight buddy from TO to Santiago was a French Canadian guy, Pascal, who was touring Chile and Argentina for 3 weeks so I invited him to meet up in BA which he and his buddy, JP, did a couple of times.  I'm always happy to meet up with adventurers and lord knows there are a lot of French Canadian touring the planet who are always up for fun.

Surrounded with fireworks at the up-scale community of Puerto Madero on NYE.

Christmas eve in BA with my sleeping guard in I got out of bed to check out some of the late, late night firecrackers down my street.  Why don't we have war like sounds happening during Christmas in Canada?  I wonder if the parents were trying to shoot down Santa Claus in hopes of collecting more goodies.
Have a listen!