In January 2013 I settled back in to the latin lifestyle and tried to bring my Spanish back up to the low level I had left it.  As well, I wanted to get out of the hot city of Buenos Aires and get some beach time in.  Brazil is quite far and they don't speak spanish and Argentina has no good beaches, so it was off to Uruguay for 1 week near the end of the month.  The bonus of living in the southern hemisphere during January is lots of beach and pool weather, hell that's why I do it!

In Buenos Aires, some moments in my neighbourhood of Palermo.


Ouch, I didn't see the accident, but apparently a moto got hit shutting down the street right out side my front door.  Fortunately the massive rain in the video didn't start until after the victim was moved from the scene. 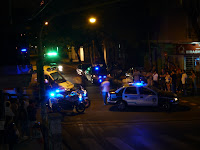 Off to Uruguay for a weeks vacation on the beach.  Mac and I jumped on the bike that needed to get a new import permit for Argentina which meant leaving the country and returning.  So, why not kill multiple birds with one ride (Literally!  Mac took a bird right in the face!  Well, off her visor so no damage to her face, but it sure was a surprise).  In addition to the new import permit we got to the beach and saw a lot of Uruguay by bike.  In addition, addition this was Mac's first time visiting Uruguay which is amazing considering it's almost in throwing distance from Buenos Aires and I've been there 4 times already.

Since it was high season in Uruguay we thought we might try to get something for a week to save on the individual night gouge.  Tough to find a place online and to know how good or bad it would be so we ended up deciding to break the trip up into a couple nights in Montevideo (MVD), Aguas Dulces, and La Paloma.

Firstly though we had to make our way to Uruguay which is either a slightly expensive ferry ride from Buenos Aires to Colonia then a drive 200km to MVD OR a drive 250 km around the bay to Fray Bentos the first of the land borders between the two countries and then another 300 km to MVD.  Since the ferry was fully booked the choice was easy although the ride was not considering it was Mac's first time on moto for a distance longer than 50 km and I hadn't rode my bike this distance in over 6 months.  Tough day, but at least the weather was good and the border nice and smooth.  Road Rating: C3R7/8T2V5.

Video crossing the bridge in to Uruguay at Fray Bentos (I can now check off all borders between Argentina and Uruguay). 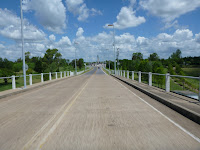 I had visited Montevideo (MVD) on my way to Puerto Iguaza last year, but had not experienced the "Old Town" which I expected would be nice like the rest of MVD I saw before.  Although the hostel, Pasada al Sur, we stayed at in Old Town was great, Old Town itself still needs a little crime cleaning up.  About half of it is very rough and the other half is touristy.  We were on the cusp and didn't find too much in the area at night.

View from Pasada al Sur Hostel where we stay in old town MVD.  A fantastic hostel with big double rooms and great bathrooms for $50 USD.  Five neighbours decided to join together and turn it in to a hostel.  Great idea.

Note: Uruguay is a little more expensive than Argentina kind of like Canada to the USA do to the size of the economies with equal lifestyles more or less.  A nice politically safe sentence... 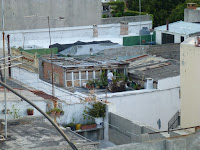 After a couple days in MVD we made our way 300km up to Aguas Dulces which lies about 100km from the Brazilian border along the Atlantic coast.  Road Rating: C3R7T3V4/5. A nice little spot where the ocean is about as warm as you will get in Uruguay (24C).  Our accommodation was a little two storey cabin with a parrilla in the front.  Lovely oners Alicia and Frenando.  A nice couple days with a healthy 15 min walk to the beach.

On the road to Aguas Dulces


Relaxing as I cook on a parrilla for my first time


For the second portion of our beach tour we stayed at La Paloma which is about 80km from Punta del Este and only half the cost (sure we would have liked to stay at PDE, but $120/night and $50 meals was something I wanted to avoid.).  La Paloma was not exactly what I expected, but still very popular and had everything you needed expect warm water!  Anything south of Aguas Dulces apparently is cold water.  A bonus was finding Hotel Cribe in La Paloma which doesn't look like much, but had everything we needed at $50/night including a great breakfast.  This was by far the best deal we found after looking at multiple places including a $30/night shed with no windows and a tiny communal bathroom.  Awful.  Even worse is I considered it for a night, yikes!

From La Paloma we made a day trip to Cabo Palonia the hippy commune.

Cabo Palonia is a National Park of Uruguay that was settled by hippies and grew in popularity over the years.  Talking to people who went in the 1980s apparently there was no electricity, but now a days they have scheduled 4 x 4 shuttles to the commune, umbrella rentals on the beach, electricity and Harley Davidson signs, WTF?  Don't get me wrong, it's still worth a visit for the nice beaches (cold water!), seal watching (hence the cold water!) and general atmosphere (I got the feeling you could find some magic potions there in the form of green or something similar).


Taking the 4 x 4 shuttle in to the National Park of Cabo Palonia. 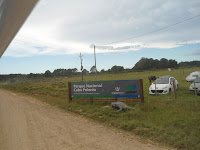 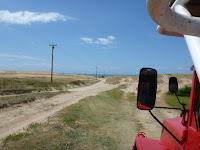 This place has electricity, what happened to the hippy commune?

Our last night in Uruguay we made our way back to MVD via the famous Punta del Este (mentioned above) to see what all the fuss was about.  Well, compared to all the other places in Uruguay I can see why PDE draws the rich and famous of Latin American with big beaches, shiny restaurants and beautiful harbours.

Punta del Este beach area.  There's a lot of it.


I was really surprised how fast these big ferries cruise, check out the waves in the video

See February for another new apartment with a pool and views of electrical storms you don't want to miss...