April 2013 was the last month of my southern hemisphere summer 2012/13, which was a little shorter this year due to my up coming duties as a Best Man in May.

The month was good and full of the usual life enjoyment know to the Latin world, the learnings that come with it and some other moments.  Helping out a moto traveller, ordering milanesa delivery, Saturday night parilla with friends, a last dinner with Spanish classmates and a border run to update my visa and moto paperwork as well as putting the moto to rest for another 6 months filled this April.

To start the month I met Tani from Finland who was looking for cheap bike gear to ride from Argentina to Mexico on a DR650 he was buying from an Aussie in Jujuy.  Unfortunately my emotional attachment and Tani's tight budget did not make for a transaction, but we spent some good days together and I gave him some tips for the trip (and sold him some pesos at a better rate then the banks).  Best of luck and keep me posted.


Ridiculous Side Story: While out with Tani I met a Canadian kid from Vancouver at the bar who didn't know where Calgary was.  He didn't seem that drunk and he had come this far to not know the closest million people city to him.  WTF!  His nervous/embarrassed response was, "Oh, that's near Ottawa, right?".  Whether he was American posing as a canadian or I don't know what, it's been the general consensus he deserved a punch.  I think the look on my face was all he needed to ensure he won't make that mistake again.


Some photos of food enjoyed early in the month

On one of the Sundays Mac and I made our way to a local festival "Falun Dafa es Bueno" in Belgrano, my next community I will try living in when I get back in November.  She always finds something going on, but I have no idea why there was a group of Chinese Dragon performers.  "Hey you know what this festival needs?  What?  A Chinese Dragon  Good idea."  If this was a Chinese festival where was the cuisine? 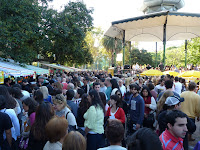 A great Saturday night Parilla at Sole's apartment.  The night went from a quiet meeting of everyone for the first time to a dance train!  Good times. 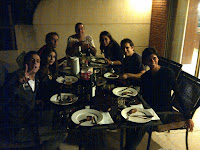 Last dinner with a few fellow Spanish students at "Las Cabras" famous for good food at great prices.  Three bottles of wine and enough food for a week cost each of the 7 of us $8 USD/each!  The best part of the evening was the fact that we had to speak Spanish 95% of the time as the two Japanese students with us don't know English.  Great. 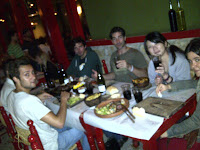 During the final days in BA I had to make a trip to Uruguay to extend my moto's legal stay in Argentina while I would be away (Argentina allows up to 8 months at a time for a moto or car and then you need to leave to obtain a new permit/aduana).  My options to do this were taking a ferry and returning or driving 250km to Fray Bentos the first land border.  Due to the expense and inflexibility of the ferry system between the two countries ($140 USD return) I chose to go at my own pace and clean out the carbon one last time before putting Bumble to bed for 6 months.  A good choice as I got a beautiful day as well as some interesting photos and videos.

Video of crossing the bridge to Uruguay at Fray Bentos 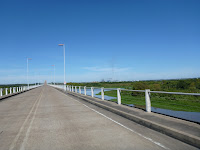 Border Side Story: When I entered the border the officer at the counter told me in Spanish that I had to stay in Uruguay for 48 hours before I returned to Argentina, What!?  This was an instant problem as I only brought my riding gear and that's it.  Not an option for me and a big surprise as I had never had this problem before on the 3 previous times.  I'm not sure this is the case now as rules seem to change in Arg every month.  I wasn't sure what to do?  Should I go in to Uruguay and come back in a couple hours or may be try a border 100 km north or simply stay 48 hours?  Having not made a decision I took my paperwork and left.  When I got to the exit gate to give my receipt of entry for Uruguay I asked the gate guard in my weak Spanish if I needed to wait 48 hours.  He looked at me in shock and said "no, just turn around now and go back in (in Spanish)".

I turned around on the guards suggestion and tucked the bike out of sight a short walk from the Uruguay / Arg office which shares a desk with the side I just went through.  I went in to the office with a hat on and different sunglasses trying to be a different Canadian moto rider with a big yellow bike hoping to get different set of border officials.  No chance.  I made my way through station 1 and 2 of Uruguay no problems and stopped at station 3 directly in front of the Arg agent that told me I couldn't come back for 48 hours.  I just kept my head down hoping he wouldn't say anything and just stamp me back in.  The guy looked around for a couple seconds for his boss and then simply processed my passport putting a stamp to it and pointing to station 4.  Relief and confusion were my thoughts after this as I finished up and left the office.  In the end I decided this was yet another lesson learned that I need obtain a usable level of Spanish.  Borders can be so stressful and truly not my favourite places to hang out.

6 hour round including a quick lunch stop in Gualeguaychu for some ok empanadas, then back in BA for some great Stunt Driving usually found on the roads of Argentina.  Triple lane changes and general gap splitting, you won't believe it, and I get to see this every day.


A good 4 1/2 months in Buenos Aires and I look forward to coming back.  Thanks again to Mac, Julian and International House for helping me make a bit of a life living in Argentina.


Next up...Another good friend takes the plunge in to Wedlock...