June 2013 - Tough laborious month, Calgary Floods, but some positives too


June 2013 was a tough month.  Lots of manual labour building a garage, fixing a truck up and volunteering for the Calgary 2013 Flood clean up.  In between that I was on set as an extra in a new TV series "Klondike" with one of the Game of Thrones actors.


Point of Interest - Congrats to Antje for making it in Hollywood.  Check her out in the films "Pandorum", "Five Days of War" and the latest "Man of Steel".  Here's to chance meetings at a little cafe in Berlin and one of the days I really took control of my life.


Some times you got to put your back in to it and help a buddy out.  Brendan needed to build a garage/two bedrooms at the family cabin due to the expanding family and was looking for a few good men.  He was lucky enough to get Pat another friend and construction expert out to the cabin and unfortunately me as well.  Aww, come on I can do something.  By no means was it a holiday weekend, but I learnt a ton about building and really enjoyed it.  Great experience.


Check this out!  Raising a BIG garage wall.  If you look closely you can see I'm doing most of the lifting, haha.

Klondike.  Trying to reconnect with the Calgary film scene I joined up with a talent agency to get my name out there and meet some film people.  Within a week I got a call to do extra work on a new mini series to be broadcast next year on Discovery.  Working behind the camera for a few years in Calgary I never really wanted to be "the cattle" as we would call the extras, but if this was my chance to reconnect, then I guess I should take it.  And the bonus was that it was a period piece so I got to wear a late 1800's costume.  In the end it was a great experience and all the extras had a good time except of course when we were waiting around to film which is standard.


Interview with a fellow extra. 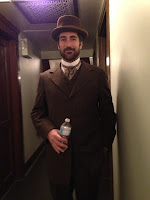 Truck repair / Pick N Pull.  A quick note.  Tommy A had a spare truck and I didn't have any wheels once I returned to Canada.  Having no desire to get stuck in traffic on a motorcycle in Calgary (I'm sure they would throw me in jail for breaking all the rules if I did buy a bike) I was happy to explore other options.

An old truck, but a good truck I hesitantly received Tom's beloved thinking the rust was an indication that it was on it's last legs.  After a good cleaning and organising everything seems to be great, just don't try to unroll the driver window, haha.  Which leads me to why I ended up at Pick N Pull searching for a window regulator.  A fun place to learn how to take things apart and you don't have to panic if you accidentally break something.

Pick N Pull, what is it? 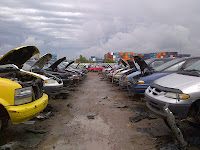 Accidentally breaking a window and cutting myself.  So foolish.

Calgary Floods 2013.  Only weeks before the huge Calgary Stampede festival the city experienced the worst flooding in it's modern developed era (the last time there were probably horses on the streets).  The flooding was a result of heavy rain in the mountains, snow melting/run off and heavy rain in the city as well. This meant that a lot of water filled the two rivers that run into Calgary all at once (a third river south of Calgary wiped out the whole town of High River pop. 13,000 people).  Some spots in the mountains received up to 300 mm of rain in less than a week which helped knock out Canada's main highway #1 in the Canmore area.  Holy crap!

A flood of this magnitude was full of all kinds of silt and debris that collected on the 100km journey from the mountains to Calgary.  In total 75,000 people evacuated their homes in a city of 1 million.  Almost 10% displaced from 2 days to as long as 2 weeks before they could evaluate the damage.  Once the State of Emergency was lifted the clean up began and the call for volunteers was put out.  Luckily I had my buddy Tom's truck all cleaned up and doubly lucky I had my friend Ricardo to kick my butt in gear and go help.  Thanks.

It was a good thing and I'm glad I could do something.  In reality there were too many volunteers  and Ricardo and I had to fight off people to pick up garbage.  Wow.  All this guilt in Calgary brought volunteers out in force.

One photo I never saw on the news was Calgary before and after so here you go.  They are not orientated exactly the same, but you can use the Saddledome (totally destroyed and shut down for stampede) to the bottom right of both photos.

Off Memorial drive and the 10st Bridge 3 days after the water had crested.  This the bigger Bow River of the two rivers. 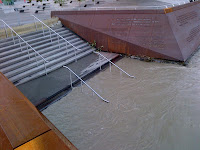 Driving in to the devastated Bowness area. 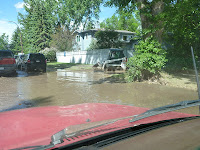 The volunteer centre.  Check out all the supplies for cleaning places and feeding volunteers.

Another Point of Interest - Congrats to my good moto buddy Dan and his new wife Claudia who we met when we were in Medellin in Jan 2012 during my moto adventure to Argentina.  Best of Luck with everything in your future. 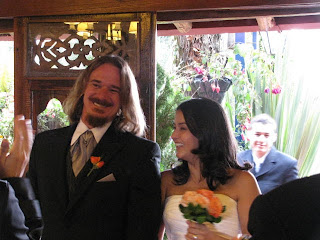