July 2013 is, as always, party month in Calgary and Canada for that matter.  It's the month where canadians finally start baring their pasty white skin in hopes of harnessing the sun on a patio with friends.  The month is full of opportunity to have a beer and a bbq and of course it all gets started with the Calgary Stampede.  This year July came in with a bang and ended with a bang Houseboating on Shuswap Lake in British Colombia.

Although stampede is kind of the equivalent of Vegas or a Bachelor party it's still just good old cowboy fun for the most part.  WARNING: Some of the videos may be offensive...to who I don't know, but I'm sure they are.

Here's what I got up to during the 10 day festival.

Day 1 - Ranchman's the oldest of the Party bars and where you will find more real Cowboys and Cowgirls than any of the other bars combined.


Cute girl riding her first mechanical bull.  I remember my first time, it was little faster than hers...Never again! 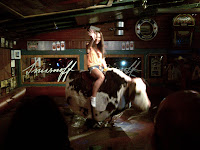 Funny Story: On Day 1 I made my way in to the Worley Parsons party after the doors opened to the public in the tent side of Ranchman's.  This was the company I used to work for when it was called Colt and is now the company where I am once again looking to get a job this summer.  It's a lot bigger now being an international at 60,000 plus employees, but the office I was hoping to find some work is pretty much the same.  Unfortunately the people I was hoping to bump in to this night were already gone.  However, I did manage to meet a high intaker of beer who offered me a job.  See August for more info.
Day 2 - Cowboys, where you won't find any real Cowboys, but it is the biggest tent/party in town.  For me it kills the spirit of stampede as the music has very little country to it and I'm one of only 20% wearing a cowboy hat.  What's happened?  Must don't care, especially the younger generation who just want to get pissed and go wild.  Alright, this is the place.

All about the line ups at Cowboys...

Incredible can opening for a beer shot gun.  With his thumb!


This guy shot gunned too many beers.  That's stampede drunk.


Day 5 - A vendor party at Ranchman's Downtown and then Wild Horse (a temporary tent just for stampede).


Day 7 - Crashing the TSE party (my last company) at the Roadhouse.

Poor smokers.  I can't believe they don't revolt!  And you they say it's illegal to take your drink in the smoking areas.  WTF?


Sorry for this, but I have to put this interview on.  A girl talking about her stampede experience and fake boobs.  I think you'll like my reaction.


Apologies to anyone who thought I was classy.  It used to be shooter girls just poured an upside down margarita in your mouth while they hoovered over you while standing on the bar.  Well now a days it's gone a little farther and of course peer pressure wins again so here you go.


Day 8 - Rodeo! and some great steaks at Vintage restaurant.  Thank you very much for the day Ryan B and Ryan M.  Best day of Stampede 2013.

The Lazy S which is an executive area where you can see it all!

Stampede Recommendations - Ranchmans for the spirit and a good time, The Rodeo watched from the Lazy S!

Mid July, Tom, Mike and myself got on the Bow River for a float after the rafting ban was lifted.  This was a result of the major flooding that Calgary was subjected to at the end of June.  This was the first weekend anyone was allowed on the Bow and the Elbow still wasn't open at this point 3 weeks after the flooding.

We took to the bigger Bow where we got a first look at some of the damage to the banks and the over all routing changes.

Houseboating!  What's that you say?  At the very end of July I got the invite to join a crew of annual houseboaters who go for one of the biggest boats on the lake and bring out a full band set including Drums and 4 wired mics!  How could I say no.

We left for Beautiful British Colombia Thursday afternoon for one night in dock on our floating palace and 2 nights docked on whichever random beaches we liked.  I hadn't been houseboating for 10 years and I had forgotten just how great it was to get out of the city, head 5 hours in to the mountains and get to the very warm Shuswap lake.  Loaded down with beer and band gear 4 of the 16 of us arrived in Sicamous for the lengthy orientation and loading of the boat.  The rest joined through out the night and the stage was set (not till noon the next day) for a good time.

Intro at the Waterways dock.


And now for music.  Probably the main reason I came on this trip was for this...


Sorry for the swearing, but it was scary.  Jumping with camera off the top level.  It felt much longer than the actually video.


Taking the camera down the tunnel waterslide.


And then just dangerous diving.