October 2013 was full of many events and I think a good month to show the life in Calgary as the weather usually starts to turn.  I took in everything from more Pro Hockey, Pro Football, a visit from an old friend,  saw Bumpershine open for Fozzy, refreshed my First Aid, enjoyed a live performance from my favourite singer Chris Cornell and of course dusted off my home-made Halloween costume for a second showing.
Calgary Flames vs Montreal Canadiens
One of the oldest hockey teams in the NHL came to town for a visit and the loyalty of their fans was definitely felt.  I think half the stadium was in Montreal jerseys and lets just say, "Welcome French Canadian girls to Calgary!"  A rowdy night for sure and the bonus was Calgary squeaked out a 3 - 2 victory after being down 0 - 2 at one point in the game.


Calgary Stampeders vs BC Lions
Given tickets at the end of the work day on Friday I wasn't sure I would actually get to the game or really push to go as it was only hours to the start and a little chilly (-8C).  I asked my buddy Marek if she wanted to go and with her excited push we were on our way.  All and all a good game and time.  Calgary over the Lions to top it off.


Bumpershine opens for Fozzy at Morgan's pub (one of my favourite bars in Cow Town).
Although I had to miss a hockey game to see my buddies Chad and Dave play as the opener for Jericho and his band Fozzy it was well worth it.  What a night which finished off on Fozzy's tour bus!

German visit
As I have told many people I encounter in my travels "Come visit me!".  Well, Martina took me up on that and stayed with me in Calgary for the last weeks of October.  It's always to good to visit your city and surroundings as a tourist every once in a while.  I wonder the last time a person living in Calgary made it to the Calgary Tower for dinner (9/10 experience!).  If you haven't do it!
Glad to have you Martina and see you in Munich next year!

Photos from our trip to Banff.

Trying to do it all we stopped in at Michelle's party in costume on the way to the show, then ventured up to the Jubilee.  A place with great sound and seating, but no liquids allowed in the theatre, not even water, oh Canada you silly place. 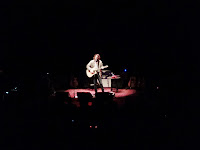 Seasons a song reintroduced in "Man of Steel" (great sound, like you were there!)


Halloween Day and Night
Having put so much effort in to my Car2Go costume last year I figured I should "wear it out".  I popped it on in the morning for my walk to the office and our lunch party.  Got some interesting looks on my way to work, but no horns or anything like that.  Although when I got to work a few people mentioned they had drove past me wondering what was going on.

Side note: Last years 1st place at some bar I had high hopes to finish well in the lunch party competition.  I probably shouldn't have mentioned that to the judges, oops.  2013 was not the year for a Car2Go victory.

A good video to show a few design flaws in my costume.

Once nightfall arrived we made our way down to The National on 10th for some bowling action, which I can never say no to.  Not an easy game in that damn Car2Go, but the bonus was a rep from the "Car2Go" company asked me to send her photos so they could post them on their site.  I later followed this up hoping to expand the opportunity to an ad campaign "Hugo the Car2Go".  Originally they offered 30 minutes of drive time ($11.40) and I countered with the ad campaign, but they didn't go for it.  Let's just say I have haltered negotiates until further notice.

Ended the night at Ducky's listening to the worst AC/DC karoake.  Enjoy!

Funny Side Story - After bowling I went to put on my shoes to find they had different colour laces and had shrunk a whole size.  WTF?  Seems some dumbass in the lane beside us couldn't figure out that my shoes were not his and left with mine.  See if you can tell ... 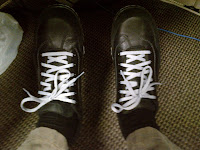 One more weird side story - Walking past a City service yard I noticed something strange about this bush.  It was like the fence had sprouted pieces of tree.  Was the worker who hacked the bush up lazy or sadistic?  Did he purposely leave pieces of the bush to set a warning to the others that if they didn't keep in line the same torturous fate would befall them.  Point taken?  or was he making an art statement? Nature vs Man?  Take a closer look.