February 2014 went fast and likely do to the fact that I got some sort of food poisoning that rocked me for about half a month. In the spirit of short and sweet enjoy some more Latin randomness and this month's bonus look-a-like section at the bottom of the page.  Congratulations to team Canada at the Olympics, especially the Men and Women's hockey teams.  Oh yeah, and there was a Super Bowl, kind of.

Beginning of the month and there was a Super Bowl between my Denver Broncos and the Seattle Seahawks. We all gather at a newer bar, The Garage, in San Telmo for a big Super Bowl party.  The crowd was a little more towards the Broncos even though they were not the favourites.  I think people like offence more than defense, unfortunately that doesn't win championship.  And you know why...

Side Rant: Watch the next championship game and tell me the refs call it like they do in the regular season.  That's why Defense wins championships.  The game gets tighter with more holding, etc which is not called near as much as the regular season because honestly who wants to be that ref that made a huge call costing the game for one team or the other.  This is seen in the NBA, NFL, NHL and any other sport that has interference between the two teams, even soccer.  Too be fair offence is harder to produce when you are nervous for the big game as it requires that extra bit of skill to make the play as opposed to breaking up a play.  Put your money on Defense.

The game began with much excitement and that was it.  Denver fumbled the ball in to their own end zone and continued to get dominated after that.  I tuned out by half time and went in search of a beer pong game or what ever to numb the pain.  43 - 8 final score!!!  I was a fool to think it could be any different considering how Denver likes to lose the big game holding the record for worst loss ever and 3 of the 5 worst losses in Super Bowl history.  Incredibly they have 2 Super Bowl victories, by narrow margins of course.

All the drinking and heavy eating over the last weeks of January coupled with a a dodgey lunch special was enough to crush half of February for me.  Although I should have gone to the doctor, as a Canadian I struggled to crack open my wallet to pay for an appointment.  Oh well, it's just food poisoning and it did pass.  Always nice to lose a few kilos too.

Tips to prevent a bad stomach
1) Stop eating Blood Sausage every day!
2) Stop smoking furniture.
3) Stop chasing beer with shots of Fernet (yuck!)
4) Stop trying to understand Argentinian women.
5) Don't take antacid drugs recommended by a Heart Surgeon that cause diarrhea.
6) Balance your meats, not all pork at a BBQ.
7) Avoid getting computer viruses when streaming the Olympics from Russia.
8) Don't bother trying to order something with out cheese if you are lactose intolerant.


In need of good healthy food I discovered a great lunch place thanks to my friend Luli.  Martin Cocina is perfect with a nice variety and Martin himself, a high level chef, is not afraid to have an in-depth chat about his daily preparations and pretty much everything else.

Working People in Buenos Aires.  A couple photos depicting some of the work in BA and the conditions that probably wouldn't be allowed in other countries.


Congrats to Canada in the Olympics.  As I was getting over my stomach illness I once again got addicted to Olympic coverage which I didn't expect to find on Argentina TV considering they had only 7 Athletes representing the country.  I believe Canada had approximately 240 athletes.
Special congrats to the Men and Women Curling and Hockey teams for 4 Gold medals!

January 2014 - Good times and lots of good food to get in to 2014.  The second half of the month was spent hanging with my first visitor to South America, Tom A, who decided to take a break from the cold, dark Calgary winter and join me for a few weeks.  As well, more random oddities in Buenos Aires.  Enjoy. 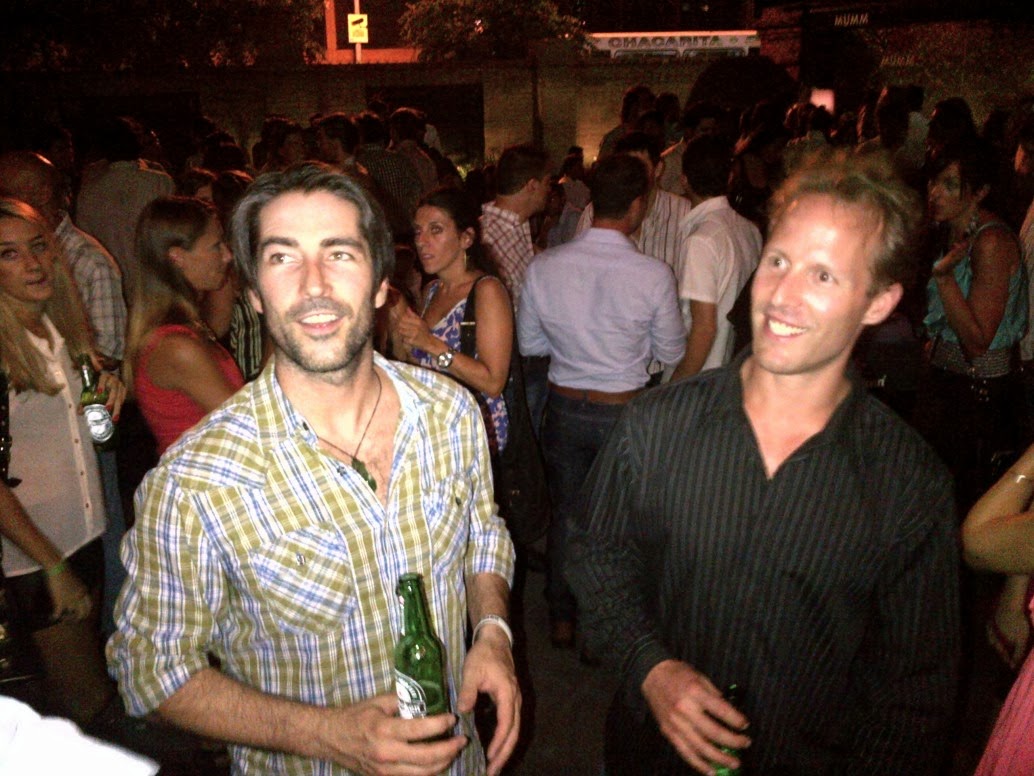 The very beginning of the month God (and the baby living next door) had to cry a little, Holy Crap!  Check out this downpour.

Drops or Splashes?  Would you prefer to have drops of water from the overhangs of building above hit you in the head or would you rather step on a loose "floating tile" on the side walk that will splash you with what ever water has settled under it? 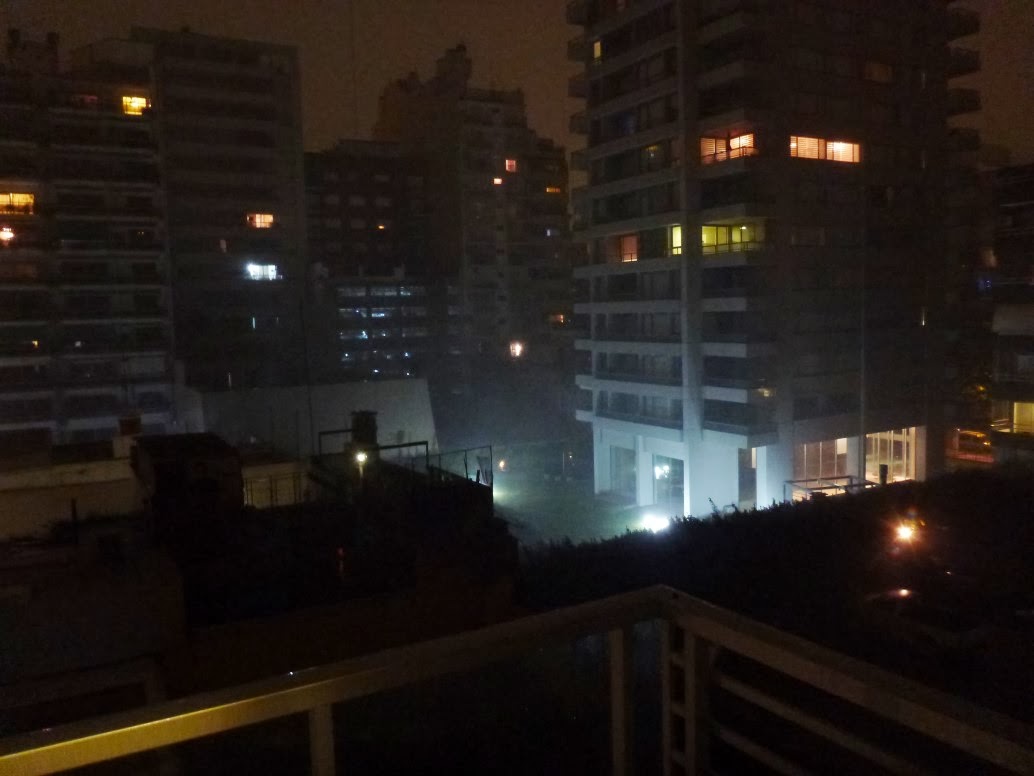 Out to Pilar and Sole's mother's house for her birthday.  Nice day for an asado and the pool! Sole's father Jorge is the master of asados/ BBQs.  Typically cooked over wood or coal for about 1 hour with a good amount of salt on the meat.  The cuts of meat used are not the types you would cook rare so asados are mostly fully cooked, but still tender and delicious.


Check out these views from Sole's apartment building on a windy day.  Spectacular! You can see all of the city.


Listen to her!  A friend of mine who's friend is a lovely singer, Lucia doing a cover of Elvis' "Can't Help Falling in Love with You"

Some other moments in BA before the arrival of TA.


TA IN BA.  Tom Anderson arrives in Buenos Aires for a 2 week vacation.  Welcome.
My life is never certain enough for people to pin me down and come for a visit, but Tom figured it out.  Let's have a look at his two weeks that began mid January.  First week - Buenos Aires.

After a week hanging in BA we rented a car and hit the road for the beach or at least hoped to hit the beach.  First stop was Mar del Plata about 400 km southeast of BA.  Unfortunately the good weather did not want to join us for the trip.  Not sure how two engineers got so focused on the details of the trip rather than the actual destination and weather never bothering to look outside to see a storm coming.  Ok, I can see how that would happen.  But hey in bad weather you can always go eat something right?


Taking in a great beach area in Pinamar (100 km North of Mar del Plata) - UFO beach.  Unfortunately we were unable to get a place to stay in this lovely area so we headed back to Baires to give Tom a day break before he was off to the Northeast and the Iguazu Falls.  Definitely a spot I will come back to someday soon. 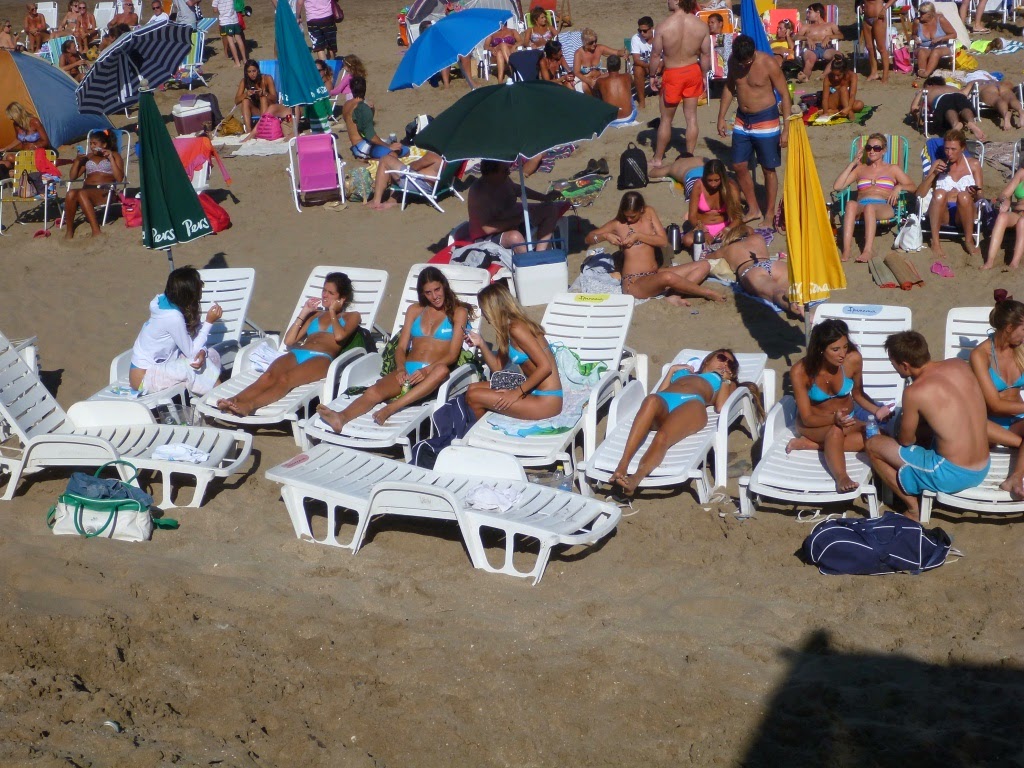 Last days in BA for TA.  The very lively and early evening Rose Bar on Thursdays for so called "after works drinks" which begins at 8pm and has a minimum age of 25.  I love it because on the inside you can dance like a night club, and on the outside you can take a drink and chit chat which is more my speed.

Thanks for stopping by Tommy, I hope you enjoyed your trip to Argentina.  Be sure to tell all your friends.  See you in Venezuela in a year or two!  Oh, yeah and don't bring your huge radio then either!