In May, I made my final border run for the season that was almost my last, we visited the natural thermals of Concepcion, had a BA movie experience, discovered new neighbours and attended a couple birthday parties to fill up the month.  Oh and Happy Mother's Day too.

Final border run for the season renewing my Visitor Visa and the Permit for the Moto.  Always sounds so simple, but if you have followed my other border crossings to re-new visas and permits you will know it's not.  Long story short we entered in Fray Bentos, the first land border between Arg and Uru, and then exited 100 km north at Paysandu and then stayed at the Thermals in Concepcion.  All good except I only received a 6 month permit which meant the moto had to leave the country by early November.  I know everyone is thinking, what's the big deal, but normally I am tight to return to Argentina from Canada for various reasons so early Nov is too tight for my liking.  The rule is 8 months and that is almost always what I receive.  The fine if you go over the allotted time is 40% the value of the moto which is about $6000 USD in Arg (more than I paid for it in Canada 4 years ago!)

So, on the raining next morning after a nice late afternoon/evening at the Thermals I went back to the border making up a story that I forgot my phone in Paysandu and only needed 20 mins.  Everyone was fine with that going in to Uruguay, but once back through the same Arg border control it wasn't fine...oh NO!  The girl working went to the back office with my passport commencing a 30 minute discussion with her supervisor, yikes....  The two of them finally returned to tell me my moto was illegal and I needed to spend more time in Uruguay.

At this point my stress elevated as the gravity of the situation began to set in.  I'm stuck at the border and likely not getting back in to Argentina with out paying a heavy fine and Jessy waiting for me at the Thermals!!!   I nearly cried (my Argentinian side coming through) and threw some punches (my Canadian side coming through).  These guys had total control and if they don't want you in to their country they will find a way to keep you out!

I quickly regrouped and played the honesty card telling them I was playing within the rules as they are written all these years and this was all part of my plan to film a movie late this year.  The movie seemed to get them the most excited changing their mood and mine too.  Seeing the supervisor's excitement I continued to tell him about it and my trip throwing in points of how great Argentina is.

With a relaxed smile he gave the girl a nod and everyone was breathing easier.  Thank God!

And they even gave me the full 8 months good until January 2016!

Thermals of Concepcion del Uruguay which are one of the few real natural thermals springs in the zone.  Although the others are hot pools they are artificially heated, making Concepcion the spot to receive the natural minerals you miss at the others.

A very nice set of natural thermal pools surrounded by a community of cabins and apartments.  Solid planning by these guys.


Finally making it through the border and man was I happy!


Back in Buenos Aires some more of those interesting and random moments.

Going to the movies...Always go 30 to 45 min before a movie as you will be dealing with "airport security" long lines.  Of course movies don't start on time.


Food - Learning a little about Vegan cooking.  Unfortunately none of the follow photos represent my efforts... 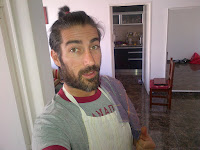 During a Boca Jr, vs River Plate game that occurred at the Boca Jr Stadium a pepper spray bomb exploded halfway through the game.  Five players from River suffered minor burns and the game was cancelled.  While it was happening everyone was glued to the TV as the potential for danger and a riot was very high.  Thankfully nothing happened.  On top of the cancelled game which Boca Jr forfeited, they were also fined and no games in this yearly FIFA tournament will be held in the Boca Jr stadium for the next 2 years due to the incident!

Yeah, Bumble and I closing in on 50,000 km together.  One of my longest relationships...


New neighbours who paid nothing for their properties.  Squatters moved in to an abandon building next door and no one seemed to care.  The police even have a foot cop observing (texting his friends) our street right out front and nothing happened.


Luli's birthday at Casa Babel which has an actual radio station / sound booth just off the patio!