June 2015 was time to head back north to Canada, but first I had to find a spot to leave Bumble Bee, find a plane that could actually leave Buenos Aires then return to my Oil and Gas world. 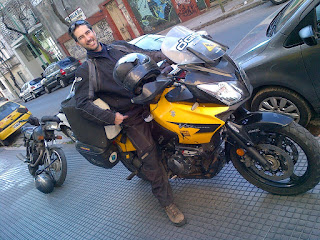 
Home for the bike.  Always a little bit tense trying to lock down where to leave the moto and this year was no different as my last place was not available, too bad.  Long story short, I had two good options and settled on a great spot out by the airport which meant I could ride to the airport saving the crazy taxi costs ($35 USD for Argentinians is like $150-200 USD for an American).  Thanks to Fernandito for connecting me with Hernan.  And thanks to Mauro for helping me change the brakes and oil the day I was leaving.  And of course thanks to Hernan for giving my a place to store Bumble.
Just incredible, filled house of Motos and everything Moto.

Can I go home now?  I wish I could say my flight home experience went smoothly, but it didn't.


The first attempt was June 16.  I packed up the moto and road to the airport after saying my goodbyes.  Once I put everything away and Hernan dropped me at the airport I arrived at the checkin line looking around thinking this short line should be moving a lot faster.  Oh no, the flight had be cancelled a few hours earlier and I had to back track all the way to the Buenos Aires apartment.

Let's just say Jessy and everyone else was quite shocked.

Back from the airport at the security gate of the apartment.  I told Jessy it was a pizza delivery to which she said she didn't order anything.  Then she asked what was the order and I told her "a canadian".  The video captures the moment she comes down to let me in.


The second attempt was June 23.  Due to booking my first flight with points the best reschedule available was a week later.  Anyway... I headed to the airport on the moto again, put everything away and got another ride to the airport from Hernan.  This time I got in the plane and as we were backing up all the power, I mean all the power! went out.  We sat in the plane at the gate for 2 hours as they played around, a couple of moments of complete darkness for stints of 5 minutes or so.  Around 12 am I was back in the airport in a taxi line that of course United paid for.


A video from the plane in total darkness.  Better to leave on a plane fit for service than this one.


The third attempt was June 24.  All I can say is once I got through the huge check in line I was happy to find myself in economy plus seating at least until I found out they had mixed up all the meals and I was stuck with the beef at my own risk.  Well at least I had leg room and a TV that worked.  Again on the second flight (Houston to Calgary) United was kind enough to put me in economy plus.  Unfortunately it wouldn't be United if they didn't leave a bad taste in my starving mouth.  Landed in Calgary and happy to be done with the journey, I waited at the luggage carousel to realise my first bag was missing two wheels and my second bag was not to be found.  Uff.

Follow up good news - United compensated me with a few hundred bucks in gift certificates for my next cancellation adventure, delivered my lost bag and bought me a new suitcase too, I guess I should say thanks for the headaches...?


Video showing happy Brad with too much leg room.


Back to Texas, and the cold (shoulder) U-S-of-A.  What's with the 8 passenger golf carts driving all over the airport.  Where are people supposed to walk??


Back in Red Canada.  All back together again.  Home with a job, new pub opened by my house and endless reunions with my friends.  Oh and possibly a visitor on her way...how exciting... 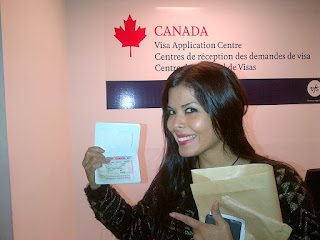