July 2015 - Jessy arrived for a visit, the usual Stampede shenanigans, and a nice cruise out to the Rocky Mountains and Shuswap lakes.  As well, a trip out for a Funeral in Saskatchewan for my Uncle Bill where my Grandma had a mild heart in the church, but she was ok.

A busy month for sure, like being shot out of a Cannon at the Stampede!

Stampede 2015 - First Friday Stampede Parade, a few work parties during the day, a birthday at the Calgary Tower, a night at Ranchmans and the final Sunday at the Stampede Grounds to spread over the 10 days.  Good times. 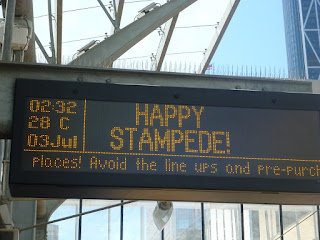 First Friday Stampede Parade from the terace of PI Engineering, thanks Paul.

A little Western Dance show during the Willbros party and a Blast from the Past.


Calgary Tower Birthday.  Happy Birthday Jessy!  We went up to the top of the Calgary Tower for a nice dinner and a great view of the city and the Stampede Fireworks at 120 m above the street.

Cowboys with TSE and the U of C Chemical Engineers and Chris K.  This is the annual Chem Eng party that I started crashing 15 years ago then turned it in to a mini Colt reunion which keeps getting bigger.  Thanks to TSE and the ex-Colters working there I always plan it the day of their Stampede party to ensure there are some fun people.  Always a good time and made better by the help of Alex H again this year.  Thanks for the tickets bud.


The Classic Ranchmans near my house.  I used to dislike this place thinking it was a bit boring, but that was probably because we were there in the afternoon and it was a little too cowboy for me.  Now a days it's my favourite Stampede venue being close to home, very authentic with a balance of modern tunes and full of activities like bull riding indoors and outside.  Some times you can even catch true Rodeo Stars having a few beverages.


Jessy ripping up the line dancing.

And finally the Stampede Grounds.  Can't remember if I had ever been to some of the shows, so we spent the day running around checking out Cirque Eloize, Super Dogs- Hollywoof, Cannon Lady, Evolution Extreme and Magic! (Jessy's favourite band of 2015).  All for the price of the general adimission to the grounds of $18.  Definitely recommend all of the shows.


Those Little Donuts, famous for as long as I can remember.


Shake your booty and lose weight for only $800.

With luck one of Jessy's favourite bands at the moment - Magic! - were at the Stampede Coco Cola stage.  And it turns out they are Canadian too.  Wow.  Good show and a big surprise for Jessy.

Watch Jessy as she figures out her favourite band Magic! is on stage.  Priceless.


Then Evolution of Extreme leading into the firworks at 11pm. Quite the day!


Holy crap, it's seriously all happening in this video!  Fireworks and Stunt guys on Fire!

From 10 days of Stampede to the Shuswap Lakes for a break thanks to the invite from Brent and Tanya who rent a cabin out there every year.  No better place to relax than interior British Columbia lake side with friends and water sports.

An afternoon stop in Golden to enjoy one of my favourite places in the world at the top of Kicking Horse Mountain - Eagle Eye Restaurant. Later closer to the bottom of the mountain we had a visit with Boo the Grizzly bear.

On the lake staying in Eagle Bay 3 nights which quickly turned in to 4 due to our addiction to the lovely area and company. 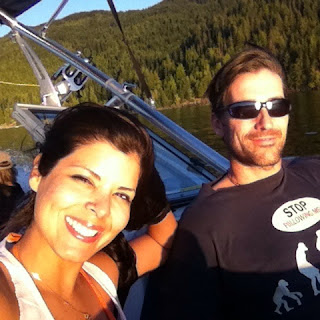 A few other points from July