August marked my 10 Year Anniversary beginning a life a little different.  August 28, 2005 was the date when I officially left my Engineering job and began riding the world with a motorbike searching for a place to hang my hat for good.  Although I haven't locked in a permanent place I have truly enjoyed the ride to this point!

Thanks to all who have visited this site (and above sites) enjoying some stories, photos and the things I've learned over the past 10 years.  And an even bigger thanks to the people that have been in the blog giving my a place to stay, having a meal with or a few too many beers.  With out you guys I wouldn't even have left my house!


August 2015 I took my 2011 Vstrom "Turbo" for a rip through Alberta and British Columbia hitting Red Deer Lake, Golden, Shuswap Lakes, Castlegar and Fernie in a 10 day whirlwind.  Expo Latino, garage sales and some extra bits to round out the month as well. 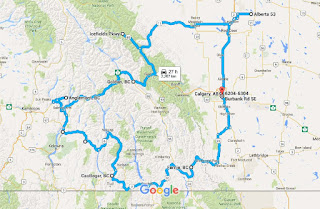 Best way to start the month is to already be 1 day in to a great road trip through Alberta and BC.

A nice invite to enjoy Brendan and Andrea's cabin near Red Deer Lake a few hours North of Calgary.

Chopping Wood!  Apparently this was a tough piece according to Brendan.

After a few relaxing days near Red Deer Lake it was off to the Ice Fields and a night stay in Golden, BC with a good friend's dad, Fernando and his incredible pasta.

Cruised from Red Deer Lake to Nordegg for gas and lunch (grabbing a lunch to go in Rocky Mountain House).  Pretty straight up to that point.  C3R7T2V5.  Then up to the Saskatchewan River Crossing and on to the Icefields.  C5R8T3V8, Riding along the river through the Rocky Mountains.

The Columbia Ice Fields - are the largest icefields in the Rocky Mountains of North America.  Jessy and I visited the Athabasca Glacier which continues to shrink over the last 100 years and has sign posts to let you know, incredible change.

Back on the road and heading for Golden the rain decided to hit us for our final 30 minutes of the 10 hour day.  Uff.

Unable to trade my bike for his corvette, we hit the road once Jessy was done fondling some big tomatoes in Fernando's garden.  We set a course for the Shuswaps for 3 night at the Casa de Harms.  Highway 1 the whole way for 4.5 hours.  C3R8T4V5, Rockies and quaint small towns along the Kicking Horse river.

A little RnR at Casa de Harms.  A good 3 days of rest and relaxation between moto rides in Anglemont, BC on the North side of the Shuswaps.  Lots of family with Harms cabin 1 and Harms cabin 2 a few doors down from each other.  I need to get Costa cabin 1 going in this restful place.  Well, restful enough until Jessy and I crashed a jetski that is.  Good news is we survived a 85km/h dump off with only a cracked rib for me and both pairs of sunglasses at the bottom of the lake.


Off again.  Taking my buddy Luke up on a self invite we set off from Anglemont to Castlegar, BC.  This, one of the longer days took us South to Vernon (C4R7T4V6 Vineyards, rivers) then East to Nakcusp (C5/6R8T2V7 beautiful foothills and mountains, rivers, back country motorbiker's road - Hwy 6) and South again (C5R7T3V7 river valley, Columbia river) to Luke and family's new home in Castlegar.


A great night with Luke, Jess, (and kids for a little while) and Jessy chowing down on some Chinese take out on their huge patio of their beautiful home.  So nice to have a place to stay in a beautiful area of Canada.  Thanks again guys and see you next year.


Fernie, BC bound.  A short day that we got to enjoy, stopping in for fish and chips in Creston and cruising along the USA border as close as 4 km at points on highway 3.  C3R7/8T2/3V7 fruitful lowlands climbing mountains and riding beside forest lined rivers.


One night in Fernie at my buddy Pete's place.  Great spot, great dinner and fun card games with the Dudes.  Fernie is definitely a place to stop for a night or two, especially if you are a mountain biker or skier in the winter. 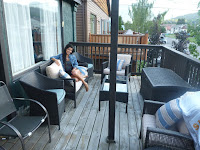 Final day, back to Calgary.  Approximately 2300 km in 10 days, road wary, but happy to have made the trip Jessy and I got back to Calgary after a pit stop to see Rachel and Ian my Moto instructors from 2005.  A fitting way to end the trip and cap my first 10 years riding around by moto.


Expo Latino, a chance to check out some of the local latin restaurants and food trucks, watch forms of dancing and listen to a bunch of people speaking spanish in Prince's Island Park on a beautiful day.


Check out this older fella, 80 something and he is using shoes bought at my garage sale earlier that day!!!

Garage saling.  Don't knock it, it pays for the Vietnamese lunch and beer.  Plus it's a great excuse to stay around the house to fix little bits and pieces, etc.

Karaoke Jessy.  Although I was quite nervous for her singing in English, I thought it was pretty fantastic.