November was a month a little more off the beaten path during my times in Calgary.  Went to a high end wedding at a secret club, received a mystery package from NZ, spontaneously bought a car and gave a skiing lesson to an ESLer as she began to experience Calgary Winter.


Kevin and Tiffany's Wedding and "Illuminati" Reception at the Calgary Golf and Country Club (the oldest private golf club in Calgary).  Hidden right next to the Elbow River, which I have rafted by many times, I was beside myself to see the size of land it occupies when we arrived.  At the entrance to the club they asked us to leave our cell phones outside.  What secrecy...

A beautiful night, great four course meal with delicious wine and champagne.  Congrats Kevin and Tiffany and thank you for the invite.

Long forgotten Stuff in NZ.  A mystery to me as I had forgotten what still remained in NZ arrived at my house after sitting in the storage of a Canadian friend's house in Auckland for 4 years.  Thank you some much Curtis and Kaylene for storing it and bringing it up to Canada in piece meal over the years.


For a date night I thought I would Buy a Car, then go for dinner and some Blues!

Turned on my computer at work in the morning, saw this beautiful RSX Type S with low km "supposedly" in mint condition and I was hooked.  That night four of us (3 engineers and a date) went to check it out in the dark. I bought it.  To be fair I had been looking for a few months at cars just not this type and this sporty, but I figured it was a good deal so I jumped on it putting my faith in the Older English Chef owner.

After the purchase we trimmed two people out of the group and headed to "the Coupe" a vegetarian restaurant with the most expensive "specialty of the night" drinks (never order a mixed drink with brandy as one of the ingredients).  Oh and be sure to ask the price, or at least look it up even if it is a date!  $13 for this pink drink in the photos. 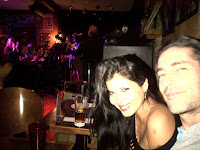 
Finally at the end of the month as the ski hills began to open we ventured out to Norquay Mountain and a night at Hidden Ridge Resort (and their hot pools).


Jessy on the bunny hill (can't remember what they call it these days).


Taking the magic carpet back up the beginner slope and a little play-by-play on the skiing classes.

Side Story - Unable to turn right at the top of the mountain Jessy headed straight down sitting on the back of her skies too scared to adhere to the advice of everyone on the hill "Fall on your side!".  Like a bullet she made it to the bottom in seconds, me trailing the whole way unable to catch up and wipe her out before she killed herself and someone else.  Whoa.


A little showing of my skills for those who weren't sure I could handle more than the magic carpet.