January always the month of restart which was prompted by fireworks exploding right beside us.  Where do you go from there, well some surprise visitors from Calgary, some hosted Vegan dinners, throw in a few birthday parties and of course a roof top Police chase and you got a month to talk about.  Also for those engineers out there I had a construction tour of a new high rise underway in Tigre.
WARNING - These NYE fireworks videos are Awesome!

A little more intense when our neighbours across the street on the second floor decided to light up the sky.  Only problem, we were on the 10 floor of our building which I guess is the explosion range for these particular fire works.  WATCH IT!!!

The Cops take down our neighbours!  I wish I had it all on video.

Side Story: About 8 months ago the abandoned / condemned building next to us became occupied by a few squatters.  Last year I watched as the cops would gather in front of the building thinking about doing something, but they never did.  Apparently there is law that you can't remove squatters which sounds ridiculous to me, but may be that's just how it works here.  Needless to say nowadays the abandoned building is home to all sorts from Poor Families just trying to get by to Drug Dealers and Prostitutes.  May be the government should have another look at that Squatting Law???

Video of the cops tidying up the suspected drug dealers.

Welcome Visitors: On that note, welcome to the neighbourhood friends from Canada; Marty and then later in the month Steph and Elisabeth.

Marty, a guy I worked with in 2011 and loosely knew, turned up in BA one day through a comedy of errors cancelling a flight to Venezuela after reading how dangerous it is these days and then not being allowed to enter Brasil as Canadians need a visa prior to entry.  Sorry Marty, but I guess hanging out with us wasn't too bad either.  Fun to hang out with you in the Southern Hemisphere. 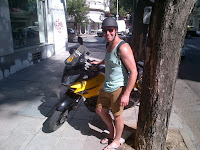 Elisabeth and Stephan, newly weddings, had planned to visit BA and Uruguay, but we never did know for how long, etc.  Fun to hang out with the second Anderson to visit me in BA (Tom being the first in Jan 2014).  Anyhow, good to show you guys a little of my second home and Best of Luck with all the things in your future.

Dinner reservations for opportunities to try potential plates at a soon to be Vegan Cafe - Costa Loba (soon, like 2 years soon if the chef goes for it).

Birthdays!
Sole caught up to me in years yet again and we celebrated that out at La Pelegrina with some family from as far as Calgary (her sister Gaby and Kevin and kids).  Thanks for all the fun.


And then Lina hosted a triple Birthday Party shaker for her, another friend of mine Patrick and some dude from her office who supplied the food, booze and the people.

Nothing like a little chugging to know it's your b-day!